To conduct research on space weather, an enterprising group of UCLA undergraduates is manufacturing the first satellite built entirely on the UCLA campus.

The Electron Loss and Fields Investigation CubeSat, or ELFIN, is a tiny satellite the size of a loaf of bread that still packs the scientific punch of significantly larger, more expensive satellites. When launched, ELFIN will determine how solar wind particles and radiation behave in Earth’s environment, a topic of increasing concern because magnetic storms can wreak havoc on space infrastructure like GPS, communication and weather satellites, and even damage the electrical grid here on Earth.

“With the advent of space tourism and the increased reliance on satellites, understanding space weather is becoming increasingly important to our society,” said Vassilis Angelopoulos, a professor in the UCLA Department of Earth, Planetary, and Space Sciences and ELFIN principal investigator. “We need to study the electron loss process to assemble the full picture of how space radiation is driven by solar particles.”

From the beginning, ELFIN had only scant internal funding, and the outlook for completion was unclear.

In spite of this uncertainty, a team of several dozen intrepid undergraduate students took on the project as their own, collectively putting in thousands of hours as a labor of love, developing and testing the satellite’s subsystems with the hope that the project would someday be fully funded.

After three years of diligent work and patience, the tide finally turned in 2013 when the U.S. Air Force awarded the team a $110,000 grant to continue development and buy much-needed parts. Last February, the opportunity to achieve their goal became even more real for these space Bruins when NASA’s CubeSat Initiative and the Low-Cost Access to Space program guaranteed them a launch spot.

Finally on May 23, the team was awarded $1.2 million jointly from NASA and the National Science Foundation, ensuring enough funding to put the space-qualified hardware in orbit and to operate it for six months from the UCLA Mission Operations Center, to be located on campus.

A collaboration between the Aerospace Corporation and UCLA’s departments of Earth, Planetary and Space Sciences; Mechanical and Aerospace Engineering (MAE); and Atmospheric and Oceanic Sciences, ELFIN will not only benefit UCLA students, who will have the opportunity to work on a real-world space program, but will also resolve a critical space physics question.

“ELFIN will train tomorrow’s leaders in space science and engineering,” said Richard Wirz, a professor in the UCLA Department of Mechanical and Aerospace Engineering and a mission co-investigator. “This educational experience enables students to apply what they learn in the classroom in a hands-on, team setting and do whatever it takes to reach a scientifically compelling and challenging goal.”

Drew Turner, an associate researcher in Earth, planetary and space sciences, noted that a quick-turnaround mission like this will give students the rare opportunity to see a project from conception to completion.

“The ELFIN experience is unusual in comparison to an industry that typically deals with one-ton satellites that take up to 10 years to build by a veritable army of engineers,” Turner said. “This will be an invaluable, once-in-a-lifetime opportunity for our students — a ride to space they will never forget!”

The satellite is tentatively scheduled for launch in late 2016 or early 2017 as a secondary payload (similar to carpooling), which greatly reduces the cost of reaching space. From its polar orbit approximately 370 miles overhead, ELFIN will determine how high-energy electrons in Earth’s radiation belt (located roughly 25,000 miles above the equator) are scattered out of their cyclical orbits by naturally occurring ultra-low-frequency electromagnetic waves. 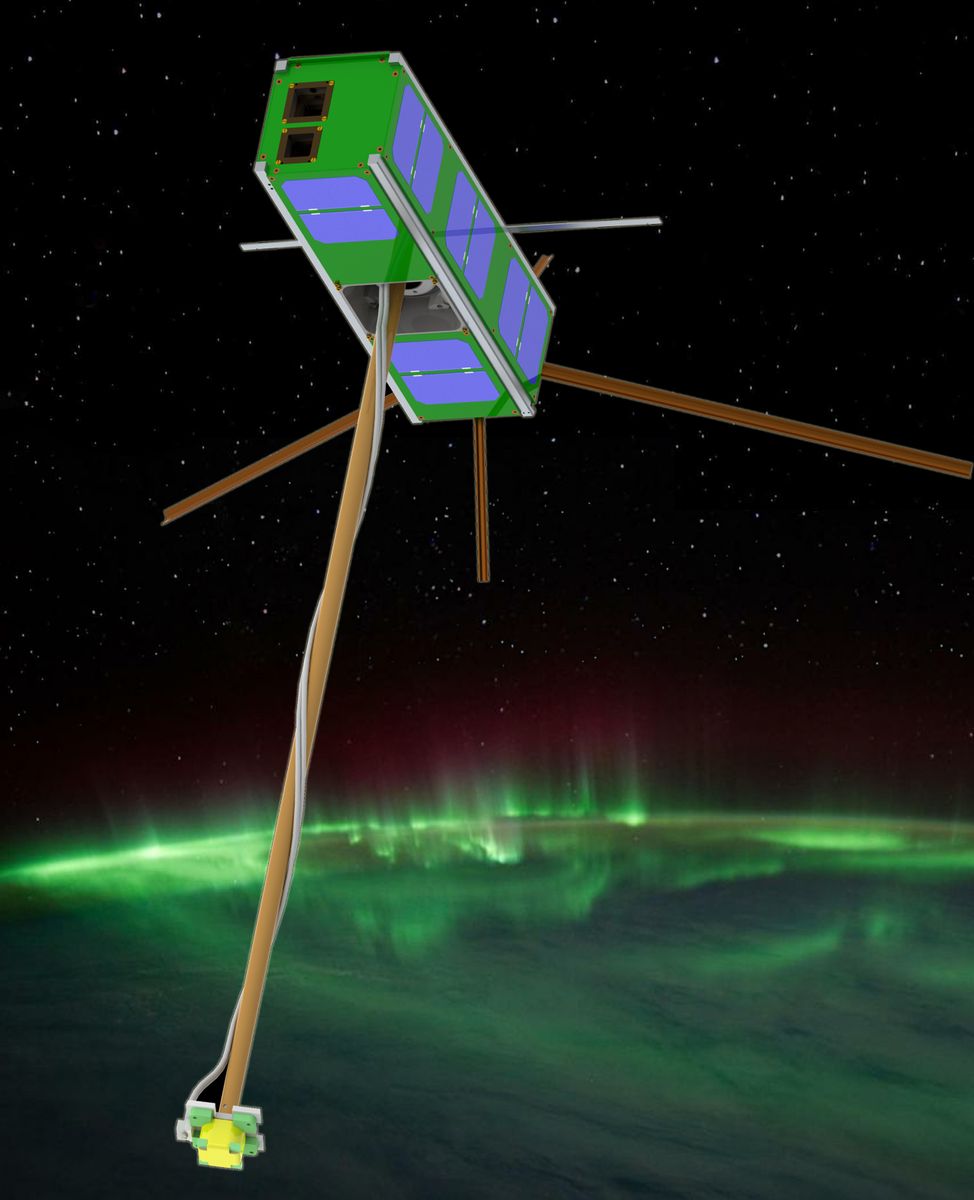 ELFIN
Once in orbit, ELFIN will study the phenomena that cause the dazzling auroras.

These electrons are guided along Earth’s magnetic field (which resembles a bar magnet) and fall into the atmosphere above the north and south poles, where their energy is transformed into the dazzling lights of the auroras. By analyzing the speed and direction of the falling electrons, the team will be able to tell what types of waves scattered them from the heart of the radiation belts. A sensitive on-board magnetometer will also look for the signature of these waves to confirm the scattering theory.

Understanding this “emptying” of the radiation belts will help scientists predict the effects of future space weather storms.

“This was impossible to do before, because no previous mission had the angle and energy resolution that ELFIN has,” Angelopoulos said. “Our students will be able to contribute to space research in a very unique and meaningful way.”

While UCLA has a 40-year legacy of building space instruments for NASA and other international missions, and a strong presence in space science research, ELFIN represents UCLA’s debut in end-to-end mission development and operations. The spacecraft will be tracked by a dedicated ground station on top of Knudsen Hall, with a backup station on the roof of Boelter Hall. The collaboration with the Aerospace Corporation in El Segundo, Calif., enhances UCLA’s space science capabilities, while in turn providing an industrial partner with a highly trained workforce to tap into the future.

Although the grant was awarded right before summer break, the prototype lab and workroom are both bustling with students cutting metal, testing circuits and working on various design aspects of the project.

“It’s mind-blowing to be making parts that will end up in space,” said Alexander Phinney, who is studying mechanical and aerospace engineering and working as a machinist on the project. “It’s really cool, but also [there's] a huge pressure to do things right as there are no second chances in space.”

In early August, ELFIN’s engineering design review will be held at the Small Satellite Conference in Utah.

“We are fortunate to be at UCLA in an environment with extremely competent staff, researchers and faculty who care and take the time to work one-on-one with us,” said Chris Shaffer, a senior in MAE and ELFIN’s student project manager. “We are building a team of students and staff with the mentality that there is nothing that we can’t do. That teamwork will be the hallmark of our project’s success. A banner stating that ‘Failure is not an option’ has been hanging in our lab ever since we started.”