Though we now think of Venice as a gentrifying playground for tourists and tech workers, in the 50s and 60s it was so infested with poverty, it was known as the “Slum by the Sea.”

With an overwhelming majority of the population just trying to pay for the bare necessities, Venice residents and the surrounding community were matching victims of neglect. By 1967, a group of young community organizers — called the Venice Health Council — mobilized in response. The council hoped to capitalize on government funding and the opening of a community clinic in Watts (which during the riots two years before had seen six days of violence, destruction and 34 deaths) to show a need for similar services in Venice.

The council’s survey showed that people were demanding dental care, specifically extractions, root canals and cleanings. Members of the council soon came to Dr. James Freed in the just 5-year-old UCLA School of Dentistry with a bold ask.

Would they be interested in sending dental students out into the community to help? 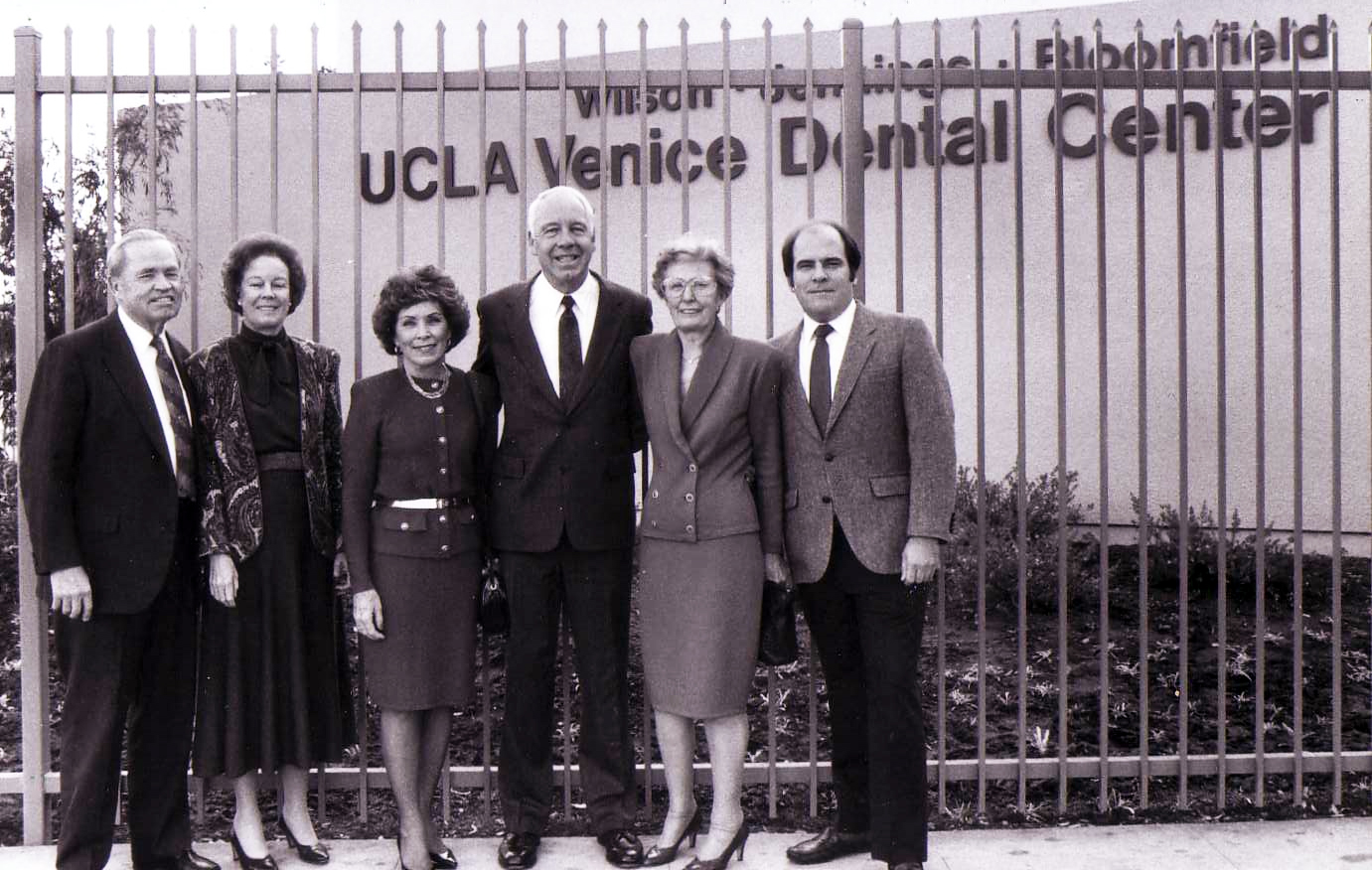 At first, the idea was met with resistance from some faculty who felt that treating people outside the confines of the dental school — which though only 9 miles away in Westwood was in an area of Los Angeles that was worlds apart from Venice — would create challenges. How would everyone handle scheduling conflicts? Would they be able to provide a high enough quality of care? What about the logistics of going from campus to the clinic?

But campus and dental school leaders ultimately felt like UCLA and the people in its new school of dentistry had the intelligence, compassion and determination to rise up to meet the glaring need. Thanks to approval from then-UCLA Chancellor Charles E. Young and the founding dental school dean, Dr. Reidar Sognnaes, the UCLA School of Dentistry accepted the challenge.

“We were a new school and experiencing our own growing pains when we were asked to open a clinic in Venice,” said Freed, who was also the clinic’s founding director. “But the mission of the UCLA School of Dentistry was, and still is, to improve the oral and general health of people — especially people in our city. These are our neighbors.”

From its beginnings as a fledgling dental school’s first community outreach effort, UCLA’s Wilson Jennings Bloomfield Venice Dental Center, as it’s now known, has become a beacon of hope for the tens of thousands of people it has helped and continues to help and also for the thousands of dental students who have treated them these past five decades.

At the direction of Sognnaes, plans began for a dental clinic in the beachside community. There was available space at 300 Lincoln Blvd. If UCLA could secure the funding to transform the 1,200-square-foot space into a dental clinic, it was theirs.

Freed received a $38,000 grant from the California Department of Public Health for start-up costs. A local dental equipment manufacturer donated four dental chairs and other various discounted and in-kind supplies came rolling in.

After a year of planning and a remodel that involved extensive plumbing work to meet the requirements of a dental operatory set-up, the UCLA Venice Dental Clinic opened its doors on July 17, 1969. Freed chose that day 50 years ago because it was his birthday.

“I’ll never forget the sense of pride and empowerment that the members of the council felt on that summer day 50 years ago,” said Freed, currently clinical professor emeritus of public health and preventative dentistry. “Here was a brand new dental facility designed to meet the needs of the community and they had played an important role in its establishment.” 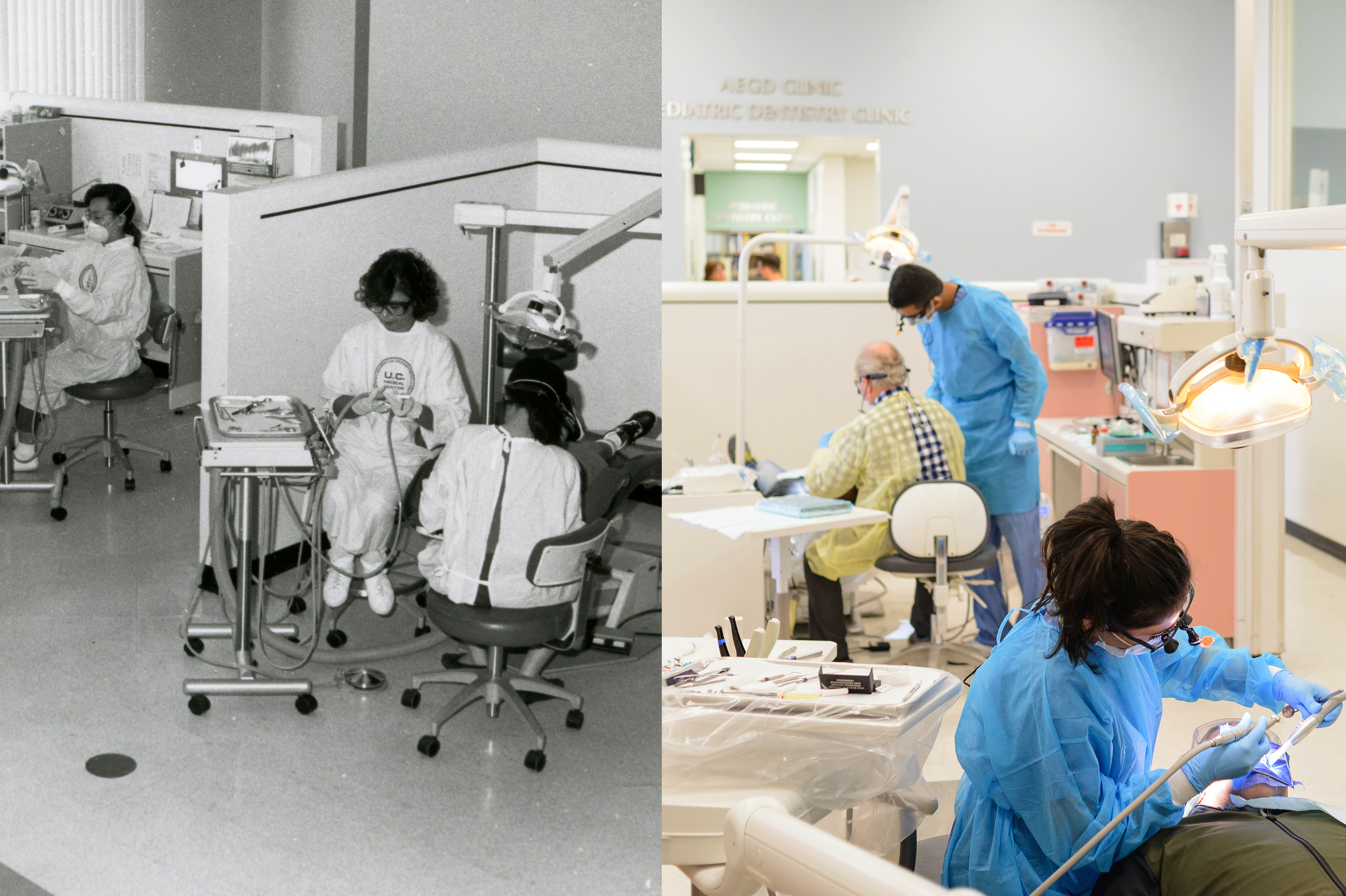 UCLA
In 50 years the clinic has grown from a four-chair operation to a 27-chair, state-of-the-art facility.

To spread the word that an affordable dental clinic had opened its doors, Freed hired Venice residents, who could present a familiar face to people in the community. The newly employed went door-to-door to tell their neighbors that they could get treatment for pain, cleanings, fillings and limited denture work. And the costs would be subsidized. Fees were determined on a person’s ability to pay and could be waived in cases of dire financial hardship. In addition to providing care to the community, Freed and the health council also wanted to provide jobs to local residents.

Right away patients came streaming in, dental students were getting excellent training and providing vital services, and the UCLA professors were instilling in their students one of the dental school’s founding values of community service. Freed recalled that entire families came in to receive free services and a large majority of patients would come to them with missing teeth, tooth decay, gum disease and overall very poor oral hygiene.

“UCLA’s Venice Dental Clinic treated people with the dignity and respect they deserved,” Freed said. “Oral health is not separate from systemic health and you need both to function as a person. Everyone is entitled to a life free of pain from dental disease.”

Throughout the 70s and early 80s, the clinic continued to be a safety net for the community, it had even added an additional operatory. However, it became apparent that the five-chair operation needed to find a new home so it could expand to fulfill its commitment to the community.

There was also a growing demand for specialty services, like pediatric dentistry. In fact, there was a year’s waiting list to see a specialist. Getting kids to the dental school’s clinic in Westwood was just not an option for many families. They had also started to accept emergency referrals for homeless people, which added to the patient load. 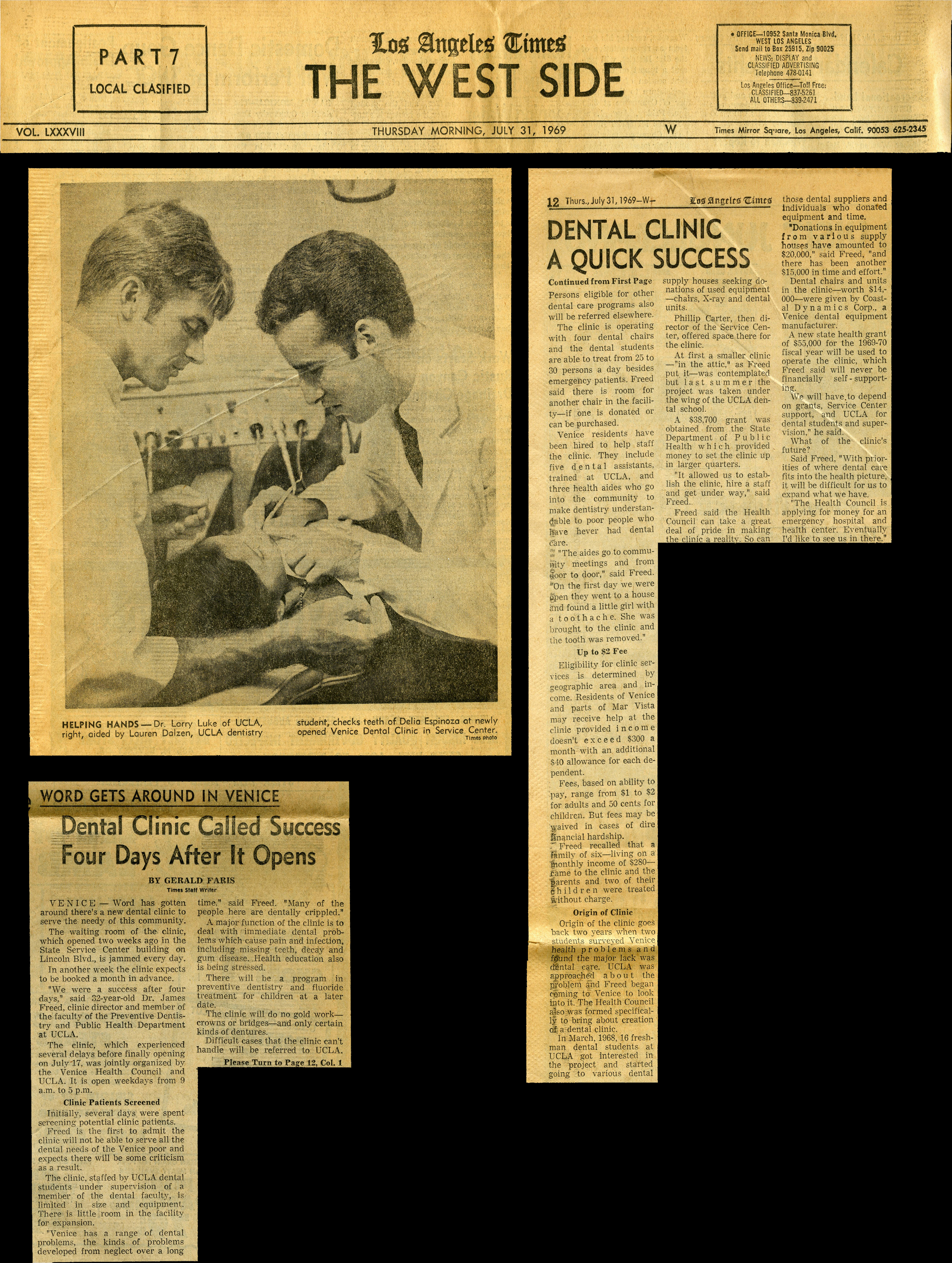 UCLA
The clinic filled an immediate need in the area.

The clinic’s space challenge presented an opportunity to Dr. James Hooley, the dental school’s dean in 1984. A vacated bank across the street from the clinic was for sale. Hooley turned to Bob Wilson, a UCLA alumnus and a member of the UCLA School of Dentistry board of counselors, for assistance. With his background in commercial real estate, Wilson convinced colleagues and fellow board members, Gerald Jennings and Bill Bloomfield, to join him in purchasing the building with their families.

“When I first saw the original clinic space, I knew that I needed to pull together resources to move the operation into a new space that met the high standards of the UCLA name,” Wilson said. “More importantly, the dental school needed to expand in order to continue to provide dental care to the local, underserved populations of Venice Beach and West Los Angeles and expose dental students to valuable clinical experiences.”

After 13 months of negotiations, the three families purchased the building for the dental school and the Wilson-Jennings-Bloomfield UCLA Venice Dental Center was established in 1986. The new building quadrupled the size of the clinic. Wilson, Jennings and Bloomfield also established two patient subsidy funds to help offset the cost of desperately needed dental care for the most vulnerable people.

By the late 1990s, the Wilson-Jennings-Bloomfield UCLA Venice Dental Center had become a fixture in the community and, in addition to general dentistry, offered restorative dentistry, oral surgery, pediatrics, orthodontics and more. The center had also become a referral destination for neighboring clinics that couldn’t provide the more complex care that underinsured people needed but couldn’t afford otherwise.

“The UCLA Venice Dental Center has been such a fulfilling part of my training and growth as a student dentist,” said Lizeth Correa, who graduated this June. As part of the curriculum, dental students rotate at the clinic to provide patient care for one day per week for an entire quarter, and all 108 students in their third or fourth years get the experience.

“Venice was my first opportunity to treat patients in a setting similar to private practice,” Correa said. “Being able to help people and not worry about the billing and scheduling aspects of dentistry, let me focus on my patient care interaction and hand skills. Because of the Venice Dental Center, I am more independent and confident with patient care.”

The Venice Dental Center will always be the dental school’s flagship community clinic. But more recently, the UCLA School of Dentistry saw even more opportunity to bring its dental students to the community by creating the Community-Based Clinical Education program. The program, which currently affiliates with 12 sites across Southern California, improves access to dental care in underserved communities while offering fourth-year dental students rotations at dental practices in areas where there’s a scarcity of good oral health care.

Additional gifts from the Bloomfield and Wilson families helped refurbish 1,600 square feet of unused space in 1997. By the early 2000s, the clinic was treating roughly 15,000 people annually, and the majority were either on Denti-Cal, were underinsured or paid for the discounted care. Fortunately, at this point several more patient subsidy funds had been established, which could be used to cover costs that government insurance did not.

Since moving into its current space in 1986, the center had expanded to treat more children. Doing so has required a different treatment approach and clinical setting. By the 2000s, tooth decay in children had become a significant public health concern and affected nearly two-thirds of children by the third grade. In 2007, the Wilson and Bloomfield families helped fund the construction of a pediatric dentistry wing. Under the leadership of Tom Wilson, the pediatric wing is complete with a waiting room with toys and books, seven operatories sized for children and a reception desk. The new space would also be home to a new community-based pediatric dentistry residency program. 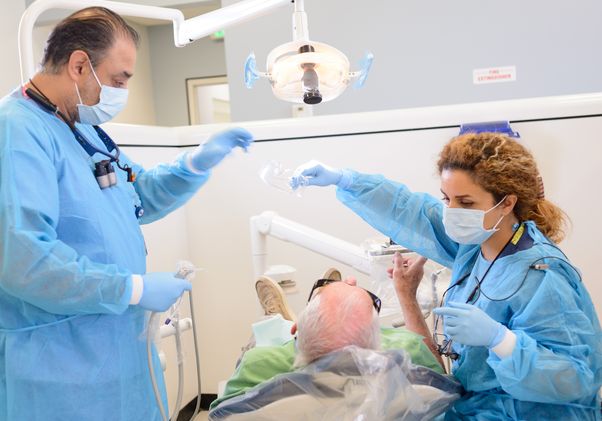 “Adding the new pediatric dentistry wing was another important achievement in the story of the UCLA Venice Dental Center and its capacity to provide comprehensive dental care to the thousands of children in the area,” said Dr. John Yamamoto, then-clinic director and current vice president of professional services for Delta Dental of California. “The state-of-the-art clinic provided a new, advanced ‘classroom’ for faculty to train the next generation of pediatric dentists to be knowledgeable about the disparities in the delivery of dental care, issues around access to dental care and who advocate for possible solutions.”

In 2009, the clinic established a community partnership with Upward Bound house, a nonprofit that helps homeless people access resources and services to help get back on their feet. The center provides dental care to families living in their shelters; restoring their smiles and self-confidence.

In its 50th year of operation, the mission of the Wilson-Jennings-Bloomfield UCLA Venice Dental Center to provide comprehensive dental care to underserved communities has not changed. The clinic has grown from a four-chair operation to a 27-chair, state-of-the-art facility that provides treatment for nearly 15,000 people every year. New radiology facilities and high-resolution imaging equipment, recently introduced at the clinic, will further enhance clinical training and expand patient care capabilities. A new sterilization room will be unveiled later this year.

“Now, more than ever, the UCLA Venice Dental Center is a vital resource to families and individuals, from infants to the elderly, who don’t have traditional dental insurance,” said Dr. Paul Krebsbach, dean of the dental school. “What started out as a small clinic by the beach is now an integral part of the dental school’s story. I know I speak for hundreds of alums, faculty, staff and current students when I say that in helping ensure people of any means have access to excellent oral health care there is no better reflection of the UCLA School of Dentistry’s values than the Wilson-Jennings-Bloomfield UCLA Venice Dental Center.”