For 40 years, Leo Estrada has devoted his time and talent to research and teaching new generations of urban planners. But, for the Texas native who first arrived at UCLA in 1977, his has also been a career marked from the beginning by civic engagement, leadership and giving back.

“Leo has been a giant on many different fronts,” said Anastasia Loukaitou-Sideris, a longtime colleague at the UCLA Luskin School of Public Affairs and urban planning professor. “He has been an inspiring teacher and a mentor to an endless number of UCLA students and a role model to many Latino and minority students.”

A retirement celebration to honor Estrada, associate professor of urban planning, for his decades of scholarship, service and accomplishments at UCLA and beyond was held June 11 at the Luskin School.

Estrada was one of the first urban planning scholars to teach and institutionalize courses about diversity and planning, said Loukaitou-Sideris, who is also associate provost for academic planning at UCLA.

“As a brilliant demographer, he was also instrumental in confronting gerrymandering and giving ethnic communities equal representation in California and other states around the country,” she added.

“As if these accomplishments have not been enough, Leo has also served on a number of important university shared-governance posts,” Loukaitou-Sideris said. His most recent leadership post was no small assignment — guiding the direction of UCLA for years to come as chair of the Academic Senate in 2015–16.

“As a young graduate student I came to know about Leo Estrada,” said Torres-Gil, professor of public policy and social welfare. “He was completing his dissertation at Florida State at a time when the field of aging was new and no one had investigated the demographic and social issues of an emerging population — Latinos.”

Leo Estrada looks back at 40 years of service to UCLA from UCLA Luskin on Vimeo.

He commended his colleague for “having the foresight to raise issues of Latino aging, support budding graduate students like myself and become a co-founder of important Hispanic advocacy groups.”

Torres-Gil, director of the UCLA Luskin-based Center for Policy Research on Aging, added: “I owe much to his early mentoring, to his friendship and, best of all, to becoming colleagues in the Luskin School.”

According to Torres-Gil, Estrada was among the first and longest-serving Latinos in the Luskin School and its earlier iterations of social welfare and urban planning at UCLA.

UCLA and beyond the gates

Estrada has been at UCLA during its growth into one of the preeminent universities in the world.

“When I came here, I would consider UCLA to be one of the better schools in the United States,” Estrada said. “As I leave now, in the year 2018, it is one of the best. And so I’m very proud because I participated in some aspects of that all along the way.”

Estrada said he has always felt called to engage in the issues, events and protests around him. When he arrived at UCLA, he said, “There was always something happening, and every place I had been to earlier discouraged the faculty from community involvement.”

But Estrada encountered a different attitude in an interview with his first boss at UCLA, the late Harvey Perloff, known as the “dean” of American urban planners and iconic early leader of UCLA’s Graduate School of Architecture and Urban Planning, as it was then known.

“He asked me if I had a question and I said, ‘Yes.’ I said, ‘If I become involved in community issues and spend some of my time not only on campus but off campus, will that be a problem?’ And he said, ‘It’s not a problem at all.’ In fact, he said, ‘I’ll reward you for it.’

“Reward me for it?” repeated Estrada, laughing at the memory.  He recalled Perloff’s response: “‘I think our faculty in the field of planning should be in the community, so you do what you have to do. Try not to get arrested.’”

Estrada said he dove into issues in Los Angeles, then the Southwest, then across the country.

“One of the things I had was a skill in mapping, and so I became involved in redistricting issues” in cities including San Diego, Sacramento, Albuquerque, Chicago and New York, he said.

“The latest thing I did was redistrict the congressional districts in Arizona after the last census,” said Estrada, who became a go-to expert for government, academics and the media. “I had a talent and I used it.”

“One of the reasons I’ve loved my position here in the urban planning program has been that I was allowed and given quite a bit of freedom,” he said.

Estrada’s community involvement put him at the forefront of issues in Los Angeles — including the beating of Rodney King in 1991 and the formation of the Christopher Commission to examine use of force by the Los Angeles Police Department.

Estrada recalls answering his home phone one night about 8. “It was Tom Bradley. You don’t expect to receive a call from the mayor,” he said. Bradley invited him downtown the next morning to talk about serving on a commission. Estrada didn’t have classes that day, so he agreed.

“When I got downtown, I was introduced as one of Bradley’s group of seven people that had been selected to serve on this commission. When I showed up, I expected to see the mayor and some of his deputy mayors, and there we were in front of the cameras .”

Estrada said the commission worked from early morning into the evening during the 100 days he served. “It was an incredible experience. We worked every day of the week, Saturdays and Sundays near the end as well,” he said. “We argued a lot.” 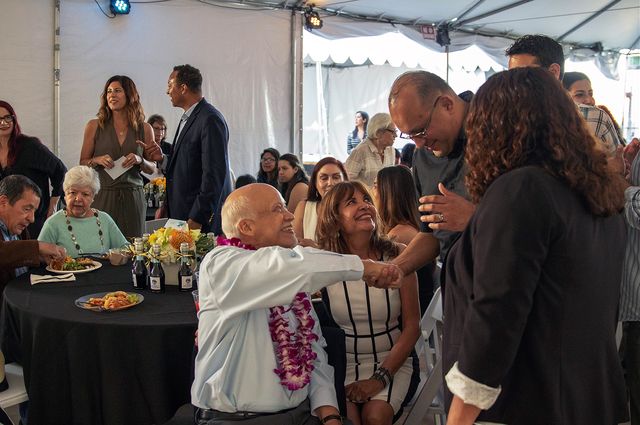 George Foulsham/UCLA
Colleagues, former students and many others turned out for Leo Estrada’s retirement party to celebrate the urban planner’s accomplishments, legacy and generosity of scholarship.

Relations between police and the public had been deteriorating in Los Angeles for some time, Estrada said. The Christopher Commission concluded that a breakdown in LAPD management created a culture that tolerated the excessive use of force. But the following spring, the acquittal of four officers involved in the beating triggered the Los Angeles riots, which led to scores of deaths.

“It’s one of the most important moments of my history and life here in Los Angeles,” Estrada recalled. “That little commission report started a whole movement of community policing that took over in most of the United States.”

Bringing the conversation back to present day, Estrada said, “I think we have regressed a little bit from some of the issues related to that, but the issues are all laid out in that report and I’m very pleased that every once in a while someone remembers this because I think it was a seminal moment in Los Angeles history and I was very honored to be a part of that.”

Estrada’s fascination with the planning profession has not waned.

“I think urban planning is … one of the key fields right now in academia. There’s almost nothing that doesn’t touch on planning,” he said. The profession has expanded its horizons, he said, pointing to areas such as food systems and bike path planning as “something we never would have thought of 20 years ago.”

“I’m just pleased by the way we expanded into new fields, never got stuck in a status quo. [We’re] always looking for new ways to make planning relevant to all aspects of urban life,” Estrada said.

In some ways, the field has become more complex, he said, but planners have access to new technology that didn’t exist a generation ago.

“As long as people really believe in trying to make this a better world, we can make things happen,” he said.

“UCLA has been really good to me, and I have been appreciative,” Estrada said, looking back on his long career. “They provided me with resources, opportunities, just an incredible amount. I can’t even begin to list the amount of things I’ve been able to do, in the department, at the university. And I’ve felt blessed.”

So as he approached retirement, Estrada decided he needed to give back. He had previously served on the undergraduate council and Academic Senate, and in 2015 he stepped up to chair the senate, which allows the faculty to participate in governing the university.

But this was no twilight tour for Estrada. “You find yourself in a position of negotiating constantly, and UCLA is such a monster in terms of what’s going on, so many things happening, so many people, and there’s 3,700 members of the Academic Senate and you represent them as the spokesperson.”

“I gave back a lot more than I was expecting,” said Estrada in his characteristic measured and understated style. “Some things were controversial.”

He added, “Leaders of the Academic Senate … work every day to make the faculty at UCLA the best that it can be.

“It gives you a perspective,” he said.  “That’s why I can tell you I know for sure that UCLA is one of the best schools in the world because I’ve seen what we do and how it’s done to sustain that kind of quality.”

As an emeritus professor, Estrada will still teach and work with his doctoral students. But he does plan to catch up on reading and do some traveling with his wife.

“I’ve already been asked to come back and do some teaching and I will,” he said, noting that he’s excited about teaching in the Luskin School’s new undergraduate program in public affairs.