With one quarter remaining until graduation, UCLA student veteran Michael Smith ran into a serious problem: Funding from his GI Bill ran dry because he didn’t complete his degree within the 36 months allotted by the bill. So the U.S. Air Force veteran of almost 10 years was forced to scramble to find the extra money to finish his degree.

Had money been available at that time from a just-announced $1 million gift that aims to help UCLA student veterans in this predicament, Smith would have been able to complete his degree without the added anxiety of raising funds.

“It would be a huge weight off a veteran’s shoulders not to have to worry about how you’re going to pay for school or housing — and just worry about studying,” Smith said.

That's precisely why William (Bill) Steinmetz left instructions to donate money to UCLA before he died three years ago. Bill was a World War II veteran who was able to graduate from UCLA with the help of the GI Bill. He worked for Ducommun Metals before joining Tiernay Metals as executive vice president. When the owner of the company died in the late 1960s, Bill bought it, said his son, Charlie.

Throughout his career, Bill remained an active UCLA alumnus and donor. “His core issue was supporting the guys and gals coming back from military service,” said his son.

But veterans who come back as college students can hit some bureaucratic bumps in the road. Smith said his schooling didn’t completely line up with the GI Bill’s 36-month timeline. Worried that he was going to run out of money while he pursued his college degree at a community college, then UC Berkeley and finally UCLA, Smith even reenlisted in the Air Force and served in Afghanistan for six months.

“I was switching around majors as well, and the GI Bill doesn’t really give you that opportunity if you are trying to figure things out in life,” he said. “You have to be 100 percent sure in what you are going to do, or you will be taking the wrong classes and wasting your time.”

Charlie Steinmetz said it was his father’s wish that military veterans wouldn’t live in fear of their college funds running out. His father was a flight instructor during World War II. The GI Bill allowed him to complete his business degree at UCLA. He also happened to meet the woman who later became his wife, Mary Lou, on the steps of Kerckhoff Hall. Their first date was at a UCLA vs. USC football game. They had three children: Charlie, Ann and Jeanie. 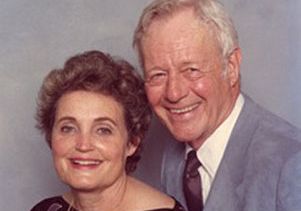 Courtesy of the Steinmetz family
Mary Lou and Bill Steinmetz met at UCLA when they were students. The community of veterans that formed at UCLA after World War ll became part of their social core and support network.

With the 2011 graduation of Charlie’s daughter, Carolyn, from UCLA, the Steinmetz family now includes four generations of Bruins. The university and veterans issues are intertwined with who they are, Charlie said.

“What I would like is for us to attract and invest in the very best of the veterans, and then they can come back and support the university,” Steinmetz said. “My dad’s generation stayed [in the Los Angeles area] and hired people and really built something on the scale of what we were going to need. Veterans are already proven leaders, so it’s a pretty [reliable] filter.”

Working with Col. Neil Gaffney of UCLA Development on initial plans for the gift, the family has designated that $500,000 of the gift will go toward one-time scholarships to help fill shortfalls in GI Bill funding. The other $500,000 will create an endowment to provide funds for  veterans’ programs at UCLA, including tutoring, assistive equipment and networking events.

“There is sometimes a misconception that a student veteran’s education is fully paid for,” said Emily Ives, program director at UCLA’s Veterans Resource Office. “That can sometimes be the case. However, often that may not be the reality. The reality is that, depending on a student’s time-to-degree, employment status and other factors, there can be major financial concerns for student veterans.” STEM majors, for example, can sometimes take five years to graduate. And the GI Bill does not cover summer classes.

“The GI Bill is fantastic, but the nature of college is to explore,” Ives said. “And when your funding source is capped out at a certain number of months, that can be difficult. This could really help [student veterans] strategize how to best use their GI Bill funds. Currently, there are nearly 100 undergraduate student veterans at UCLA; nationally, approximately two-thirds of this cohort are first-generation college students. Having this additional scholarship funding could help UCLA recruit more veterans, something the university would welcome, Ives said.

For Steinmetz, that’s good news. His father always marveled at the community of veterans that formed at UCLA after World War II and its importance throughout his life, Charlie said.

“All their friends, their social network and Los Angeles support — all these people they knew — really became significant,” Steinmetz said. Even after they graduated from UCLA, they learned from good people. "It was part of their social core.”

The gift is part of the Centennial Campaign for UCLA, a $4.2 billon fundraising drive scheduled to conclude in 2019, the university’s 100th anniversary.