“So, if going ‘cold turkey’ means quitting something suddenly, then if you go slowly, is it ‘hot turkey’?”

A visiting faculty member from China posed that question in a UCLA class specifically tailored to help international faculty, researchers and students who are non-native English speakers learn the ins and outs of casual conversation, local culture and campus life.

He wasn’t the only one taking UCLA’s American Culture and Conversation class who was scratching his head about ways to use the word “hot.”

“If the weather is hot, can I say ‘I’m hot,’ or is that inappropriate?” asked a Ph.D. student from Iran.

Each quarter a new crop of faculty members, researchers and students who hail from places like Iran, Japan, Mexico, Turkey and Colombia take the class to understand the vagaries of colloquial American English. They get help from student volunteers, who teach the non-credit class through UCLA’s Dashew Center for International Students and Scholars.

In class, the questions come fast and furious for student instructors, who must draw on their expertise in their majors and their own immersion in popular culture.

Some of the students’ questions are head-scratchers for native English speakers as well. “When someone asks me, ‘How are you?’ am I supposed to give a real answer?” one student wanted to know.

Others in the class revealed cultural traps that locals probably didn’t know existed. “I used to greet people with a kiss on the cheek,” said a student from Mexico. “But when I kissed a new acquaintance, she pulled away. What do I do when I say ‘Hello’ here?”

Current events present their own challenges and prompt questions: What’s the Super Bowl? And for that matter, what’s football? How do Americans celebrate the Fourth of July? What are our traditional Labor Day customs? 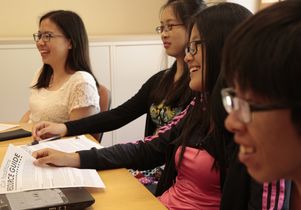 Christelle Nahas/UCLA
International student Sunny He, in pink and black, learned about campus traditions in the class.

In one class session, the students learned the slang and vocabulary about relationships. A handout listed a variety of common pet names like honey, cutie-pie, sugar, muffin and cookie.

“It seems like most of these are desserts,” observed one astute researcher from China.

Although the class is most popular with undergrads from abroad, it’s open to international Bruins of all stripes: students, faculty, postdocs, visiting scholars and even the spouses of international Bruins. In class, the faculty and researchers all become students again, eager to improve their English, learn slang and cultural touchstones, and feel more at ease in the UCLA community, said Andrew Bottom, the programs and marketing coordinator at Dashew.

“Often, the students have a good grasp of English, but they’ll want to know more about the cultural aspects of American life — idioms, sports, UCLA traditions and other cultural customs,” Bottom said. “We hope that they become more comfortable with life in the U.S. and at UCLA, and that they learn to take conversation beyond the surface and really start to connect with the people they meet.”

The class began as one of the Dashew center’s original programs more than two decades ago as a simple conversation group for international students. For the past three years, it has evolved into the more comprehensive American Culture and Conversation class, and now Bottom is retooling the curriculum for this fall to highlight slang, pop culture and details about Los Angeles that international Bruins crave.

“We’re creating a lot of new content based on student feedback,” Bottom said. “We’re adding sections on discovering Los Angeles. One will be about things to do, like tourist activities or free days at LACMA. There will be another section on transportation so they know how to get around, especially without a car. And one will be about L.A.’s enclaves and neighborhoods, and that will mostly focus on food.” Each class will devote time to talking about the slang associated with the topic, he said.

The class also helps students understand the location of Bruin Walk or North and South Campus and introduces them to UCLA’s more, ahem, spirited traditions.

“I heard every year they have naked running?” said Sunny He, a soon-to-be junior from China, during a class this summer.

“That’s the Undie Run, and it’s not naked,” said instructor Amanda Uribe, a history major who graduated in June, and explained the traditional student-organized event. “The girls run in underwear, and the guys run in boxers or briefs. The idea is that it relieves stress during finals, and it’s a really unique way of participating in UCLA culture. What do you think? Would you do it?”

The class giggled. “No!” said a girl from China. “I would watch,” a boy from South Korea chimed in. “When’s the next one?” He asked.

“What a pity,” He said to her classmate, launching another burst of giggles.

The class had bonded earlier in the summer at a party Uribe threw to help them meet local students and on a group trip to see Santa Monica’s Fourth of July parade. In their last class, they explored UCLA traditions and legends, and finally learned the campus’s official cheer, the eight-clap.

“Every time I teach this class, no one knows what the eight-clap is,” Uribe said in disbelief. “At best, they’ll have seen it, and say, ‘I saw everyone start clapping and shouting, and I didn’t know why, and it kind of scared me.’”

Uribe decided to volunteer to teach the class after she had her own study-abroad experience.

“I know how hard it is to meet friends and to really understand a new culture,” Uribe said. “And the great thing is that I’m always learning from the questions they ask about things I’ve never thought of. I’m not only learning about their culture — I’m learning more about my culture.”