Judy Lin | August 21, 2013
Video by UCLA Broadcast Studio: John Vande Wege, Sebastian Hernandez, Delaviz Eftekhar.
The Watts Towers live and breathe.
This is how Robert Nigbor has come to see the iconic L.A. artwork over the roughly six months that he and colleague Ertugrul Taciroglu, both in the UCLA Department of Civil and Environmental Engineering, have spent studying this astounding creation of Simon Rodia, an Italian immigrant who singlehandedly built the towers between 1921 and 1954.
Every day, the spindly spires of the 17 interlacing towers perform a tiny pirouette to the sun — bending away in the rising light and heat, circling back as the day darkens. When the wind blows, the towers shiver. When a train rumbles into the nearby 103rd Street Metro station that serves the neighborhood of Watts in South L.A., the towers tremble. 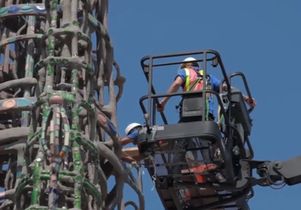 The UCLA engineering team uses a crane to attach instruments to a tower to measure movement.

Yet this sensitivity to their surroundings could be the Watts Towers’ downfall. Every movement is diffused in tiny tremors through the ornate lace of concrete and steel, tremors that produce cracks in the concrete, expose the metal to rust, and loosen the shimmering ornaments of broken glass, sea shells and tiles painstakingly put in place by Rodia, who built the entire structure using only rudimentary hand tools.

The towers’ movements, imperceptible to the human eye, visibly register on tilt meters, displacement transducers and other sensors strategically positioned throughout the towers by Taciroglu and Nigbor. What they are learning will help conservation scientists from the Los Angeles County Museum of Art (LACMA) preserve the towers, which are both a community treasure and National Historic Landmark. Their work also could contribute to the preservation of other endangered monuments.
Preservationists have been patching and re-patching these cracks for a half-century, following a period of neglect when Rodia deeded his life’s work — his "Nuestra Pueblo" as he dubbed them — to a neighbor in 1955 before he left Watts. 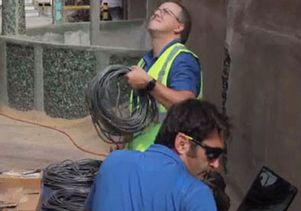 UCLA engineers Robert Nigbor (standing) and Ertugrul Taciroglu have been studying the Watts Towers for about six months with a team of a dozen undergraduate and graduate students.
Yet despite these efforts, the cracks have reappeared, said Frank Preusser, a senior conservation scientist for LACMA who has done conservation work on Egyptian pyramids and other antiquities. The museum is under contract with the city's Department of Cultural Affairs to preserve the towers.
Looking for engineering expertise, Preusser and his team turned to Taciroglu and Nigbor, who have embarked on a yearlong UCLA engineering research project, funded by the National Science Foundation through January 2014. Said Preusser, "UCLA brings a next level of sophistication of equipment and experience in a different field that will contribute very synergistically to what we already have done."
Conservation is itself a science, Nigbor noted, but a science "done at a materials level, a micro level. … To fix the cracks … you have to understand how they’re working as structures, and that’s what we’re doing."
Preusser and his team continue to closely inspect the towers daily using high-magnification spotting scopes and telephoto photography. They look for new cracks, fallen ornaments and other signs of weakening. At the same time, Nigbor, Taciroglu and a dozen engineering undergraduate and graduate students are collecting a steady stream of data from their array of accelerometers, tilt meters, thermocouplers, crack displacement gauges and an instrument that measure wind.
The data, which are collected 24/7, are transmitted to the researchers’ campus labs in the UCLA Henry Samueli School of Engineering and Applied Science. "An hour of data is [equal to] a week’s worth of analysis, or maybe a month," said Nigbor. "This is providing at least one, maybe two, grad students with Ph.D.-level work." 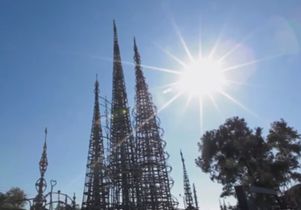 Engineers have observed that the top of the 99-foot-tall central tower moves about an inch from sunrise to sunset.
Among their findings so far, said Taciroglu, is that the top of the central tower is moving about an inch between sunrise and sunset just from basking in the sun, said Taciroglu. This data comes from a tilt meter placed partway up the 99-foot-tall tower.
"It’s fascinating how much [the tower structure] does move with the sun and with the temperature," said Nigbor. "Its properties even change; its stiffness changes by about 10 to 20 percent, depending on the temperature."
Their findings have raised more questions about how much the Watts Towers are vibrating in wind, small earthquakes, trains and traffic — and which of the various stressors have the greatest impact.
Wind is a major factor, they hypothesize. A typical strong wind, they have found, shakes the towers at a rate of two or three vibrations per second. But the Santa Ana winds, due this fall, can blow up to 60 miles per hour, Taciroglu noted. What’s more, he said, "they blow from the same direction for hours at a time, so they can create some significant dynamic vibrations in the structure," which could move several inches at the top.
They’re also eager to collect data on the impact of earthquakes. In their first six months, they recorded four small earthquakes, said Nigbor. "Based on history here, it should have been more like a dozen, so we’re hoping for a few more." 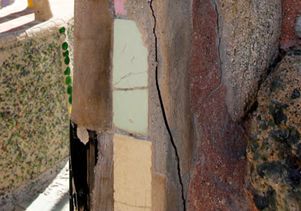 Cracks in the towers have been repeatedly patched but have reappeared, to the frustration of preservationists.
Ultimately, their research will help LACMA’s conservation scientists formulate a new type of mortar to more effectively seal the towers’ cracks.
"They need a magic recipe, if you will, that can accommodate the motions of the cracks," said Taciroglu. "They need to know how much the cracks actually open and close, and what the sources are. The mortar has to be flexible enough to accommodate that crack motion without failing."
The problems the engineers are studying do not detract from the amazing feat artist Rodia accomplished in building Watts Towers.
"The towers have withstood the test of time," said Taciroglu. "He had good intuition, and he built an excellent, safe and beautiful structure."
Said Nigbor: "He wasn’t an engineer, but he had a really good sense of how things worked … and he did a fabulous job of making structures that lasted a lot longer than they should have. It’s just that they’re a little bit old, and they need some help to last another 50 or 100 years."
Share