Two Los Angeles-area businessmen recently presented the UCLA Blood and Platelet Center with a check representing $48,000 in proceeds from the 2015 Volkswagen City of Angels Fun Ride. More than 800 people took part in the annual fundraiser, which this year for the first time launched from UCLA’s Dickson Plaza.

Peter Heumann, president of Heumann-Powered Productions in Agoura Hills, launched the charity bike ride, which is presented by Volkswagen of America, in 1997. In the past five years, the ride has raised more than $175,000, with Howie Neftin, who owns Neftin Westlake Volkswagen, donating $10,000 each year on behalf of the Southern California Volkswagen dealers association. Maria Marsh, owner of Pace Sportswear in Garden Grove, donates an additional 10 percent of her revenues from the sale of her firm's commemorative cycling jerseys for the ride each year. 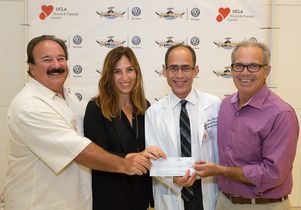 "This is my favorite day of the year, when I get to give the money we raised to UCLA," said Heumann in presenting the check, with Neftin, to Dr. Alyssa Ziman, medical director of clinical laboratories for Ronald Reagan UCLA Medical Center; and Dr. Jonathan Braun, chair of pathology and laboratory medicine at the David Geffen School of Medicine UCLA. "Blood donation," Heumann said, "is the least celebrated aspect of medicine but the most important. No medical miracles can happen without blood."

Over the years, the fundraiser has enabled UCLA’s Blood and Platelet Center to purchase a new box truck and increase its blood-collection capacity from 50 percent to 85 percent of UCLA patients’ needs. By transporting blood-donation beds and equipment, the truck enables the center to staff community blood drives throughout Los Angeles and the San Fernando Valley. Heumann next aims to purchase a new blood mobile to allow the center to meet its goal of collecting enough blood to supply 100 percent of UCLA patients’ transfusion needs.