During her freshman year at UCLA, Maripau Paz ’20 faced the very real possibility of dropping out. Paz, who was part of the Guardian Scholars Program that assists former foster youth, had an unexpected problem with financial aid. Without financial support from her parents, Paz took out as many loans as she could under her name, but she still couldn’t pay for school.

It was in UCLA’s Academic Advancement Program (AAP), the nation’s largest university-based student diversity program, that she found help. Paz remembers going to her AAP mentors in tears and telling them that she would have to transfer to a community college. They reassured her that she wouldn’t have to drop out and directed her to UCLA’s Scholarship Resource Center, which Paz hadn’t even known existed. The AAP staff then helped her develop “a really intense scholarship regimen,” in which she applied for at least one scholarship every week.

“AAP is so good at being a one-stop shop,” Paz says. “When things get rough, you can go to them. Or if things are good, but you just want them to be better, or if you just want support, AAP is a really good, centralized unit.”

“I realized I wasn’t on the same page as my classmates,” she says. “While some of my peers were annoyed that they had to wake up early for classes, I was fighting tooth and nail just to stay at UCLA.”

Her financial struggles highlighted the disparity she felt between herself and some of her classmates, but AAP’s community of students and staff understood and supported her. Most importantly, they helped her feel that she belonged at UCLA.

UCLA’s Academic Advancement Program was created in 1971, when the Education Opportunity Program and High Potential Program merged. Those early programs, which were focused on increasing access for students from historically underrepresented backgrounds, were largely a success. However, once students got to campus, there was a lack of support.

“In the beginning, things were working pretty well in terms of outreach, but retention became a big concern,” says Charles Alexander, AAP director and associate vice provost for student diversity. “At that time, students were getting in, but they weren’t staying. You can recruit people, but if they’re not prepared to do the work or they’re not able to do the work, then you have to provide some support.” 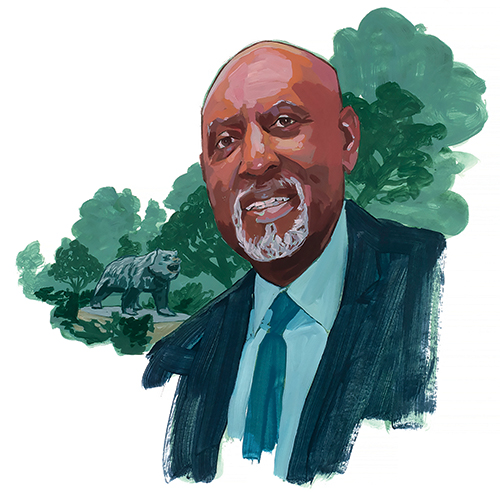 Alexander notes that two students from different high schools could both be at the top of their respective classes, yet have very different levels of preparation. A student from a wealthier neighborhood might have enjoyed the luxury of having a better school laboratory, certified teachers and a greater number of honors classes in math and science. Meanwhile, a student from a high school in a low-income neighborhood, while equally capable of doing the work, might not have had access to those resources.

“That’s where AAP steps in,” Alexander says. “We help students reach that same level of competition when they get to UCLA.”

He adds that students’ struggles aren’t always academic: “Some are having financial problems or are dealing with food insecurity or homelessness. We want to know what’s impacting the student and then address that.”

As a result, AAP is an expansive program with a multifaceted mission. The program advocates and facilitates access for students who have been historically underrepresented in higher education through the Vice-Provost’s Initiative for Pre-College Scholars (VIPS) program. A partnership between UCLA and Los Angeles County school districts, VIPS assists high school students in becoming competitively eligible for admission to UCLA and other top universities. In addition, AAP’s Center for Community College Partnerships (CCCP) works with California community colleges to assist transfer students with academic preparation and competitiveness.

AAP offers summer programs for incoming freshmen and transfer students before they start their first year at UCLA. The sessions prepare first-generation, low-income, historically underrepresented students for the rigor and demands of academic life. During the seven weeks, professors, teaching assistants, counselors and peer counselors offer personalized attention and support.

85% of AAP staff members are from historically underrepresented groups.

“AAP is at the heart of UCLA’s efforts to bring opportunity, transformation and empowerment to people of all backgrounds and means,” UCLA Chancellor Gene Block says. “From helping high school and transfer students prepare for college to supporting Bruins while they’re here and giving them the tools to succeed after graduation, the program has done amazing work — and become a model for our peers.”

Terry Flennaugh ’06, Ph.D. ’11 credits AAP for his current role as an associate professor in Michigan State University’s College of Education. Flennaugh, a first-generation college student whose mother never graduated from high school, admits he didn’t know what “Ph.D.” stood for when he started at UCLA.

“AAP was an amazing resource for helping me navigate everything from classes to university requirements,” he says. “I was trying to figure things out along the way, and AAP was so instrumental in helping me do that.” 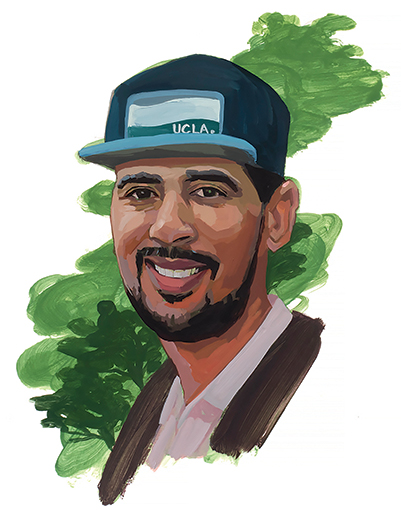 Jon Stich
“My experience at AAP helped me get to where I am right now,” says Terry Flennaugh, associate professor at Michigan State University.

As an undergraduate, Flennaugh became a UCLA McNair Research Scholar, which enabled him to develop research proposals.

“I thought research was just writing papers. But there were amazing people who oversaw the McNair program, like La’Tonya Rease Miles, who told us that research can be something that’s extremely relevant to your own experience,” says Flennaugh, who went on to earn his doctorate in education at UCLA.

“AAP made me feel like I could do things I didn’t think I was capable of, and that has been really helpful when I think about how I can be supportive of my students,” he says.

Flennaugh, who studies access and equity in education, is focused on re-creating the life-changing experience he had with AAP. At Michigan State, he is in charge of a successful bridge program that he has modeled on UCLA’s program.

“My mentors at AAP demonstrated how much they cared,” he says. “It’s where I saw people being really dedicated to the students, and it left an impression on me.”

AAP’s staff is its “superpower,” says Jonli Tunstall ’05, Ph.D. ’11, VIPS director. “So many AAP students want to come back as staff members, because they want to do the same kind of work that changed their lives. They come from similar backgrounds, so there’s an intuitive knowledge that enables them to connect with the students. It’s why AAP is so impactful.”

After a positive experience in the freshman summer program, Tunstall became a student worker at AAP, where she focused on outreach and retention. She enjoyed encouraging students to come to UCLA and, once they were on campus, making sure they felt they belonged. During Tunstall’s senior year, she was offered a full-time position as a coordinator for the VIPS program. It was an easy decision. 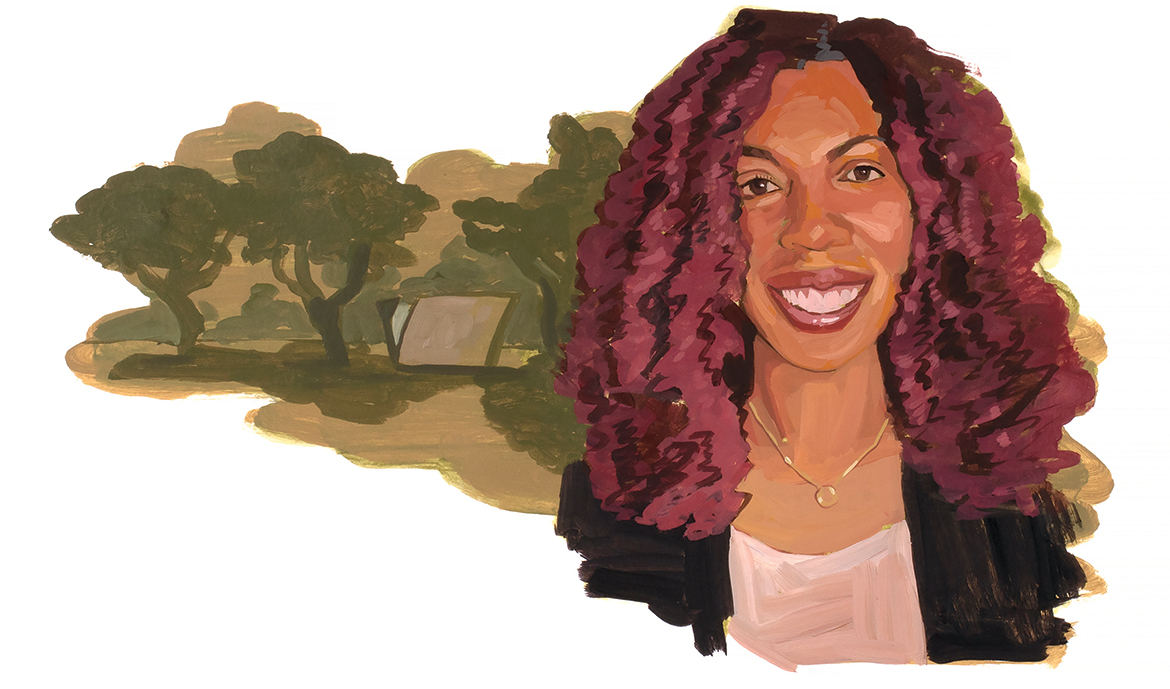 Jon Stich
Jonli Tunstall, an AAP alumna who now directs the VIPS program, says making sure students feel like they belong at UCLA is a key part of retention.

“I had the opportunity to do what I had spent my last four years doing,” Tunstall says. “It has been one of my life’s joys to help students in the same ways that I was helped.”

Whenever a former student becomes a leader on campus, goes to graduate school or sends her a thank-you note, Tunstall is reminded of the impact of her work.

“I do what I do because of the students and the ripple effect that it has not only on campus, but in our community and world,” she says. “Our students become change-makers.”

AAP staff members often remind students that UCLA is their university, hanging banners during the summer sessions with positive messages such as “You deserve to be here.” This encouragement helps students overcome feelings of imposter syndrome. For Evan Sakuma, a transfer student from Pasadena Community College, the pandemic year amplified those feelings, especially since he wasn’t on campus and didn’t feel like an actual Bruin. 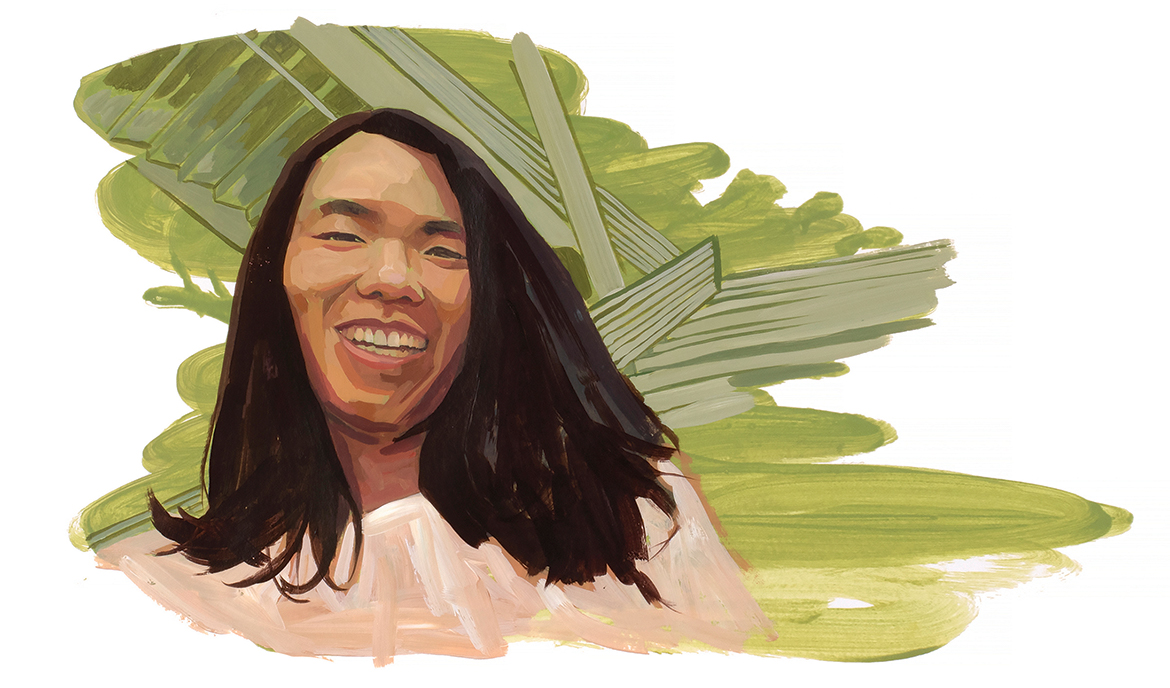 Jon Stich
With AAP’s help, Evan Sakuma was able to overcome feelings of imposter syndrome. “The people I met through AAP were able to keep me going,” he says.

When he participated in the virtual transfer summer program, however, he was able to find community and friendship. The AAP staff emulated the in-person experience as much as possible, scheduling virtual movie nights and other social events for students to get to know each other.

“There were times when I was very stressed out, and I felt this sense of imposter syndrome over and over,” Sakuma says. “But the people I met through AAP were able to keep me going throughout the year.”

Sakuma, a senior majoring in American literature and minoring in Asian American studies, was originally a biology major. But his career trajectory changed when he became a member of AAP’s Arts Initiative cohort, which engages students in interdisciplinary research within the arts, humanities, social sciences and sciences. His research project, which focused on queer Asian American asociality in American theater, won the 2021 Dean’s Prize for excellence in research.

“AAP introduced me to what research could be,” he says. “It isn’t just science, graphs and data. I was able to view research through a humanities lens, and that has expanded my imagination in my career interests.”

Paz, who discovered her love for law as an AAP student, spent her summer as a law fellow at the firm Orrick, Herrington & Sutcliffe. She now attends UC Berkeley School of Law with a full scholarship.

Once a student facing the possibility of dropping out, Paz is now in a position of privilege.

“A lot of people who go into law school end up going into corporate law to pay off their mountain of debt,” she says. “I don’t have to do that, so I have a lot of opportunities, and I’m really excited about that.”

Paz hasn’t decided which field of law she will pursue, but she knows she wants to help increase diversity in the legal field, where fewer than 2% of lawyers are Latina.

As she reflects on her future, Paz thinks of this proverb: “If you want to go fast, go alone. If you want to go far, go together.” AAP has helped her go far, and she believes that she wouldn’t be where she is today without the help of everyone she has met through the program.

“AAP gave me a sense that I was part of something bigger than me,” Paz says. “I’m part of this community, and we’re inching forward together.”