In the forthcoming movie Songbird, Hollywood producer Michael Bay flashes forward to Los Angeles in 2024, a city stricken by COVID-23 and locked down under violent martial law.

It’s just one of several pandemic-themed films currently in the works. And while some of these movies might be dismissed as tone-deaf and quickly forgotten, the COVID-19 pandemic will continue to have a profound effect on the worlds of storytelling, art and entertainment.

According to some of UCLA’s most influential artistic visionaries, the pandemic has already challenged long-standing creative endeavors and accelerated the shift to digitally expressed and distributed art forms. 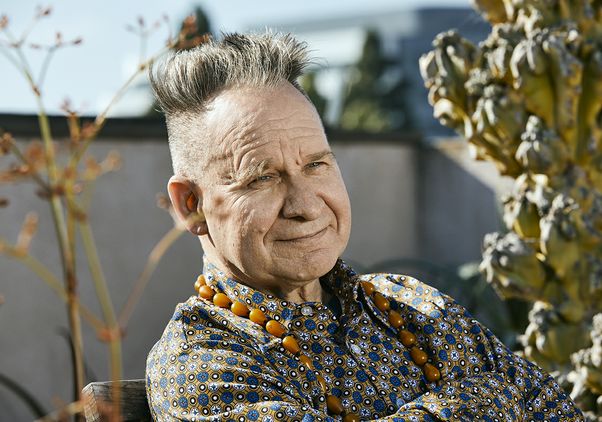 Emily Shur
“It’s up to us to find new ways to heal more deeply and emerge from COVID-19 wiser and clearer,” Sellars says.

“High art,” such as corporate-sponsored opera and ballet establishments, will face the greatest challenges, suggests Peter Sellars, distinguished professor in the UCLA Department of World Arts and Cultures/Dance at the UCLA School of the Arts and Architecture.

Sellars, an innovative director who often relocates operas and classic works of theater to contemporary settings, believes such grand houses are a relic of the 19th century. Many will prove to be physically, culturally and financially unsustainable, he says, and they will either close or share their facilities with other art forms.

“Major institutions are incapable of delivering what art will now be required to do,” he says. “New creators and new audiences will be searching out intimate experiences with a sense of the personal, the immediate and the authentic — it’s the immersive at close range. In short, human scale.

“Culture gives us a way to properly grieve that the daily news cannot give us,” he continues. “We need the rituals, the communal structures and the music that allow us to acknowledge, process and share collective grief and loss. And we need visionary acts of imagination that mobilize and empower us to move forward differently and to turn a new page in history. It’s up to us to find new ways to heal more deeply and emerge from COVID-19 wiser and clearer.”

The pandemic has accelerated the widespread adoption of technologies such as the videoconferencing app Zoom, and the pace is expected to continue as the nation moves to the superfast 5G, or fifth generation of wireless technology. But how will artists take advantage of this seismic shift?

“Technology is a pencil,” Sellars says. “Working with patience and skill, you can use a pencil to draw a beautiful portrait of your daughter or to design a better neutron bomb.” 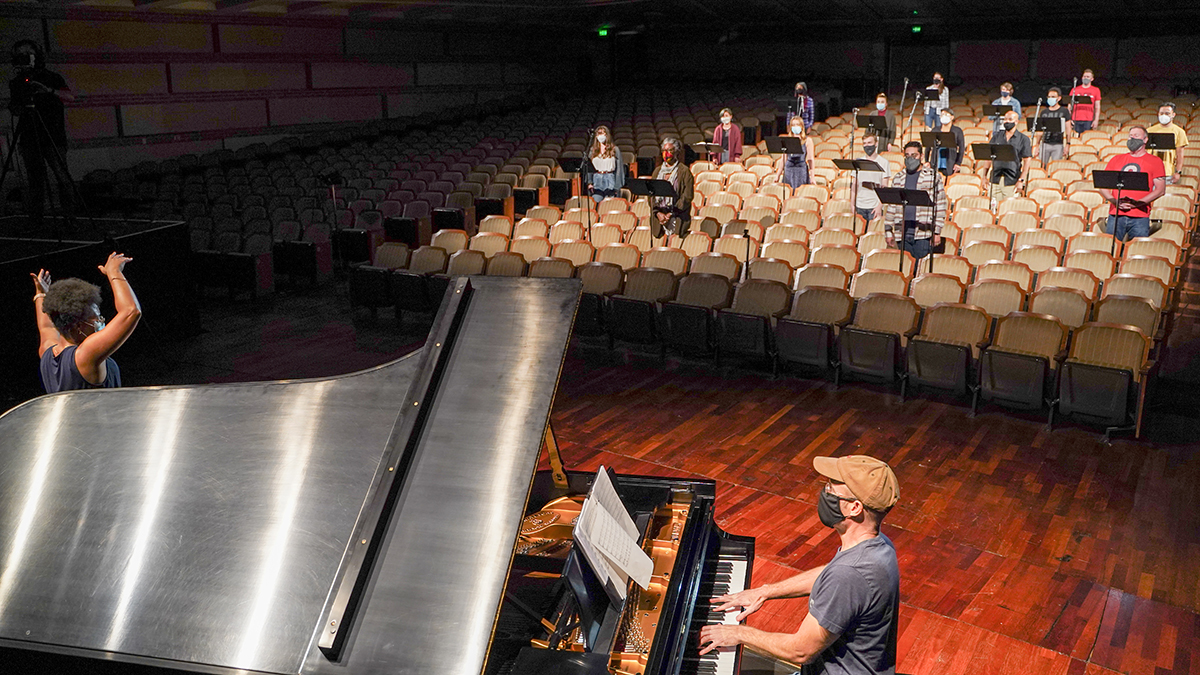 Meanwhile, others have already adapted. This year, UCLA’s Center for the Art of Performance (CAP UCLA) livestreamed nearly all of its 35 performances. Some events, such as the four-day Tune In Festival and the Complete Works: Table Top Shakespeare at Home series, attracted a wider audience than if they had been performed at Royce Hall. CAP UCLA has received positive feedback from nearby Northern California as well as from faraway Brazil and Australia.

CAP UCLA’s ability to quickly adapt reflects the determination of Kristy Edmunds, its executive and artistic director, who wanted to avoid just “snapping back to the old grid, which did not sustain us in the past.”

Edmunds believes that 5G’s faster and more stable network could make streaming a permanent alternative to some in-person performances. 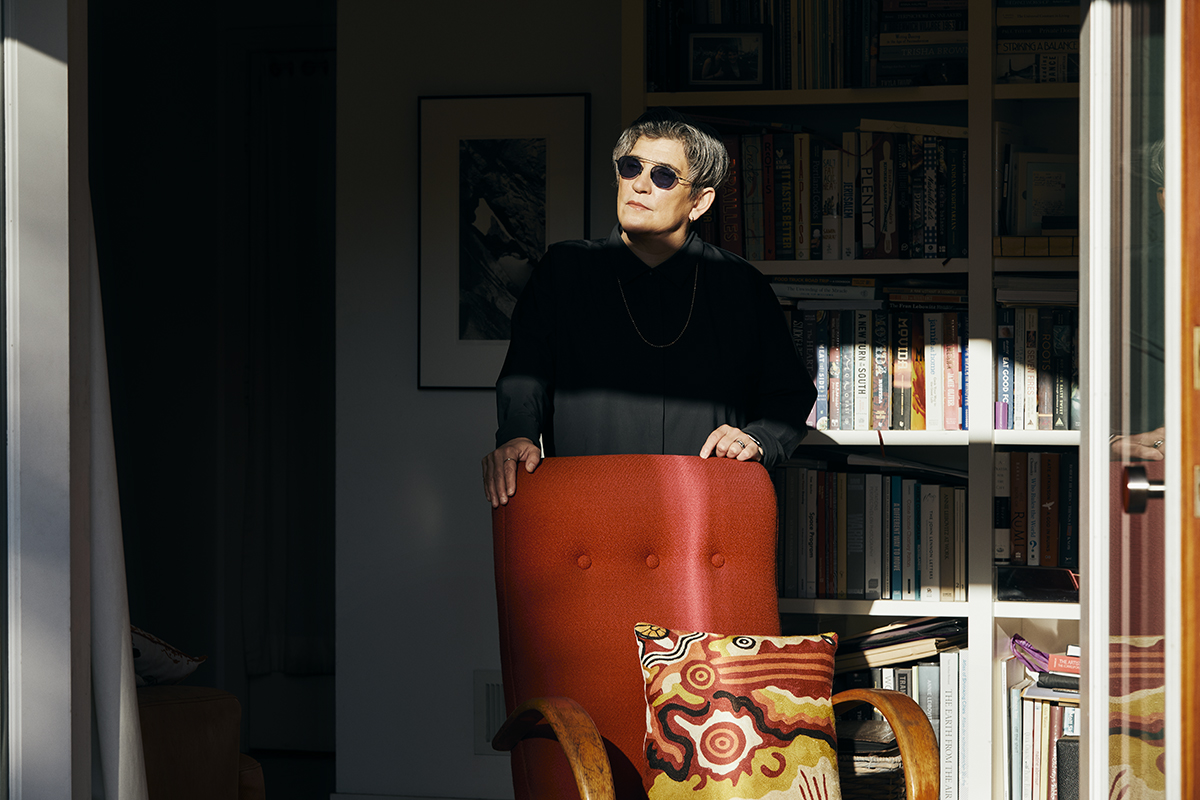 Emily Shur
Kristy Edmunds, executive and artistic director at CAP UCLA, which livestreamed nearly all of its 35 performances this year.

“I speak with 300 artists a month, many [of whom are] far from Los Angeles, and the discussion is always: ‘How can we stand with you?’” Edmunds says. “At a time when visa issues have become more difficult, and with rising hotel and airline costs, technology may offer an alternative. We can help some express their voices without them having to come to L.A.

“Artists have always enjoyed fruitful relationships with new technology,” she continues. “Some are looking to create new 5G channels. It could mean not just higher-quality streaming opportunities, but performances that could be fed live as 3D virtual reality performances into the home. This [enhanced technology] is built into the intimate space of the UCLA Nimoy Theater [formerly the Crest Theater], which I hope to open in the summer of 2022.”

This leap forward will require serious investment in technological infrastructure. But it could change how culture is experienced. 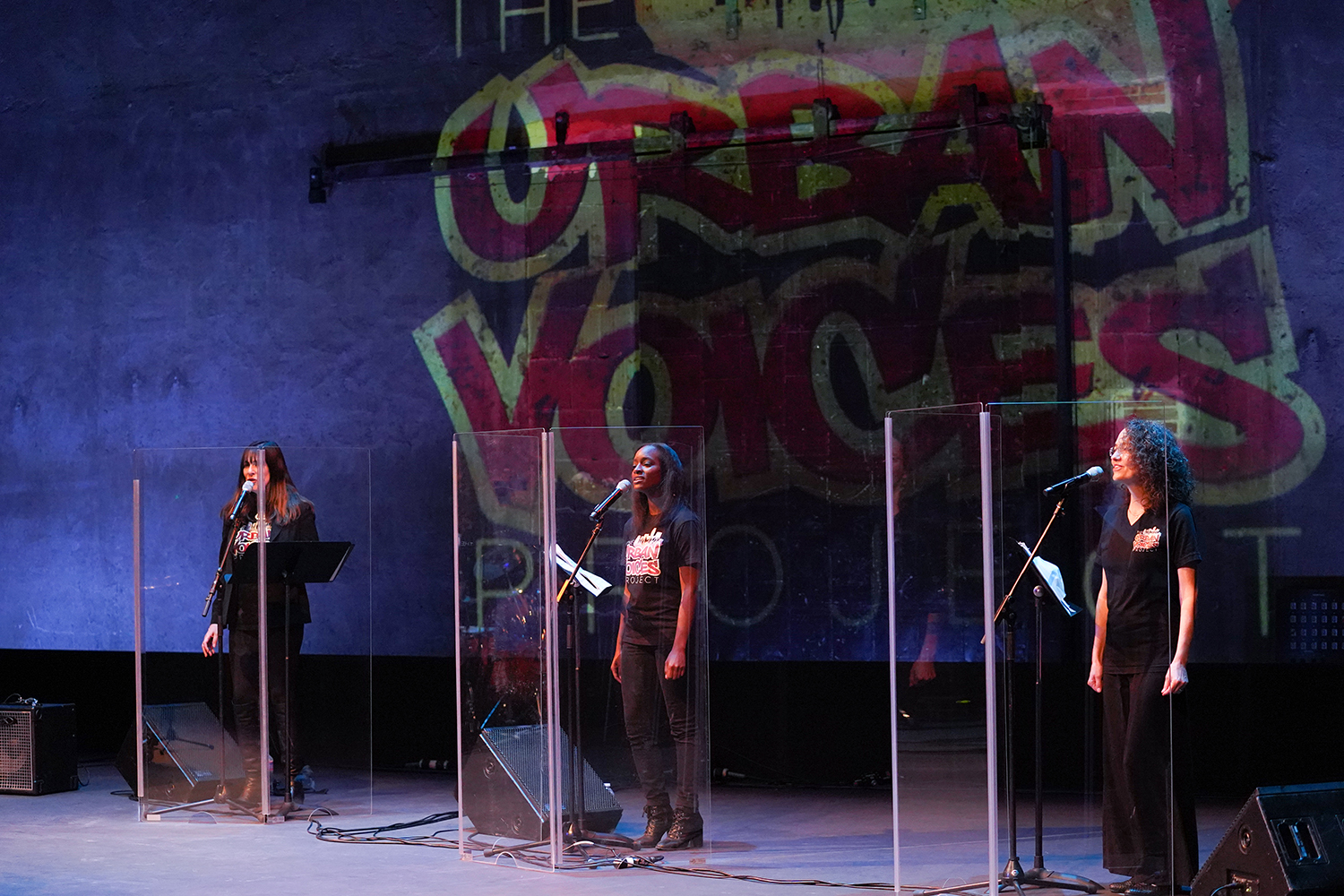 CAP UCLA is already working with Lynette Wallworth, an Australian visual artist who has won two Emmy Awards for her virtual reality documentaries Collisions (2017) and Awavena (2020). When viewing Collisions through a VR headset, audience members have said they felt as if they were actually on the sacred Australian land that’s being threatened by nuclear testing, experiencing every tremor of ecological change as if they were there.

The thrilling reality of AR

Jeff Burke ’99, M.S. ’01, M.F.A. ’10, professor-in-residence at the UCLA School of Theater, Film and Television (TFT), and his crew of students have been working on ways to bring an augmented reality experience to audiences during the pandemic. With augmented reality, a real-world environment can be enhanced with digital visual elements that are overlaid on the scene. 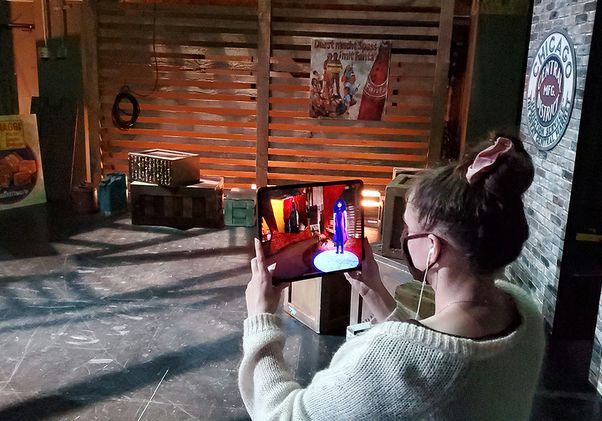 UCLA REMAP
A demonstration of A Most Favored Nation, a forthcoming TFT stage production that’s based on the work of Philip K. Dick. The audience will follow two alternate stories using augmented reality.

On Nov. 25, the TFT crew used Zoom and a mobile app called Grasshopper AR to demonstrate this new form of storytelling. On Zoom, audience members could see a stage with actors in a realistic version of 1963 Chicago. But when they looked through the video app, they could see the same stage portraying a fictional version of America that’s occupied by the Axis powers of Nazi Germany and imperial Japan. Same scene, but very different narratives.

The theater department and the Center for Research in Engineering, Media and Performance (REMAP) — a partnership between TFT and the UCLA Samueli School of Engineering — are currently developing A Most Favored Nation, a new, immersive theater and AR production. Based on the work of science fiction writer Philip K. Dick and Amazon’s TV series The Man in the High Castle, Nation will feature two alternate storylines — one will be on stage, and the other will be prerecorded and available on mobile devices. When theatergoers see the production in person, they can watch the stage and view the stage through their mobile device to experience the two different realities.

When the pandemic is over, how quickly can the arts regroup? Even though COVID-19 has laid waste to comedy and music venues, many of which are now boarded up, Edmunds believes that artists will step up at different rates and in different spaces. Musicians, poets and writers will return first, with large touring ensembles returning later.

“Theater and dance need performance spaces to rehearse and redevelop their work. It is a reality that some practices may have atrophied, like the economy that supported them,” Edmunds says.

Chon Noriega, distinguished professor at TFT, feels the most revolutionary technology is already in our hands.

“I have upgraded to the iPhone 12. With its 4K camera and some software, I could make a commercial-grade movie outside the studio system,” says the director of the UCLA Chicano Studies Research Center.

He argues that 98% of Latino culture is reduced to clichés in mainstream media, but new communication channels, including Zoom, could unleash greater diversity and frame different narratives. Noriega believes audiences staying at home have learned to look deeper and wider to find voices that reflect their interests more closely than mainstream media.

“Can we still trust our neighbors and link arms? It is artists who must pave the way back toward such a state.”

Kristy Edmunds, executive and artistic director of UCLA’s Center for the Art of Performance

“[New technology] has already allowed independent voices to establish [themselves] on their own social media channels, on spaces such as Facebook and YouTube,” he says.

Art house cinemas are also a place where diverse stories can be told. Although they have been closed for nearly a year, Noriega says these cinemas will “survive the pandemic because they have a lower cost basis. They are used to being only a quarter full.”

Large movie theater chains can expect to see several changes in the new year. In August, a New York federal judge granted the U.S. Department of Justice’s request to end the Paramount Consent Decrees, which were antitrust rules from the late 1940s that mandated a separation between film distribution and exhibition. In other words, film studios couldn’t own movie theaters for about 70 years, and now that’s no longer the case.

“So, with the pandemic devastating audiences, studios can pick up theaters for cents on the dollar,” says Tom Nunan ’84, film producer and lecturer at TFT. “We shall return to the cinema but may now find it’s the Disney multiplex showing both new releases and reruns of Finding Nemo. 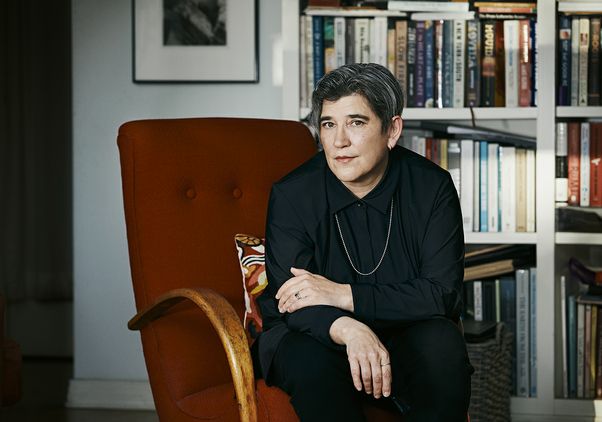 Emily Shur
“Audiences will return to the theater because we yearn to be together,” Edmunds says.

“It could end the obsession with opening-weekend box-office grosses,” Nunan adds, “as studios reduce marketing costs by releasing new content [that’s] simultaneously streaming and [playing] theatrically, with movies staying much longer in theaters.”

On Dec. 3, Warner Bros. announced that its 2021 movies — from Wonder Woman 1984 to Dune and The Matrix 4 — will be simultaneously released in theaters and on the HBO Max streaming platform. It’s a radical shift in movie distribution.

At UCLA, there’s guarded optimism that artistic renewal will be healthy.

“Audiences will return to the theater,” Edmunds says, “because we yearn to be together, not just in the auditorium but socializing in the lobbies. We need this energy and sense of belonging that we share. It will feed our soul. We [in the performance sector] offer moments that allow us to lament and to be together in connectedness.

“But the question remains: Can we still trust our neighbors and link arms? It is artists who must pave the way back toward such a state,” Edmunds continues. “They are tending to a soul that has been savaged through grief, to help us find our common humanity and each other.”

That path forward sounds like a long way from a Michael Bay movie.