In the 1940s, 17-year-old Meyer Luskin ’49 commuted the 17 miles from Boyle Heights to UCLA via streetcars and buses. He was the son of a plumber who had immigrated from Lithuania, settled first on New York City’s Lower East Side and then headed west to this community east of downtown Los Angeles and east of the Los Angeles River.

Because his father’s work included carrying 60 to 70 pounds of tools and equipment up the stairs of six-story tenement buildings, he often said to Meyer, “I don’t want you to have to make a living by the sweat on your back. … There’s a better way to make a living than what I had to do.”

So the young Luskin enrolled at UCLA when the Westwood campus was only a few buildings.

Voracious reading soon consumed his weekends. His studying paid off when he was awarded a $30 scholarship. “Tuition was $29 a semester, so I was in heaven,” he recalls. In 1949, Luskin completed his bachelor’s degree in economics. He went on to earn a master’s in business administration from Stanford and is now president and CEO of a food waste recycling company.

Today, Roosevelt High School senior James Cortez is following in Luskin’s footsteps, set to attend UCLA next fall. The grandson of Mexican immigrants says he “fell in love” with the campus during elementary school field trips. “I saw what college could be, and it became my passion to attend this school,” he says.

Cortez became a Riordan Scholar through the UCLA Anderson School of Management program for high school students who are first in their families to attend a four-year college. In the program, he received mentoring and leadership training through educational workshops.

Of course, the university that Cortez will attend looks quite different from the one that welcomed Luskin. Today, the campus is filled with buildings, and they’re separated by lush landscaping. But UCLA’s mission to provide access offers to promising students from all socioeconomic backgrounds remains constant.

“My entire education [so far] was built on the idea that I wanted to go to UCLA.”

And many of those who are qualified and determined to build a better future for themselves and their families still come from Boyle Heights, one of L.A.’s most densely populated neighborhoods. In the early 1910s, it was one of the only communities whose housing covenants did not discriminate against people of color. By the 1920s and through the 1960s, it was racially and ethnically diverse. The area was a center of Jewish, Mexican and Japanese immigrant life, and it also hosted significant Yugoslav, Armenian, Black and Russian populations. Today it’s mostly Latino, though landmarks that capture its multicultural evolution remain.

With that rich history, Boyle Heights exemplifies a number of enclaves across sprawling Greater Los Angeles where the children of immigrants and working-class families have long sought a better life through education. And UCLA has provided them that chance. Taking public transportation, carpooling and working part-time jobs, students have accessed the opportunity available across town.

“I am eternally grateful for the concept of a public university that made it relatively easy for me to get a good education,” says Luskin. “That’s what makes me love UCLA. The concept of democracy — I treasure it as the basis of human beings in this country getting together, allowing us to escape Lithuania and Boyle Heights. If we didn’t have that, where would we be? We had a chance for a great education. And this is what made America.”

Meanwhile, Cortez, whose grandparents immigrated from Mexico to Boyle Heights, says, “My entire education [so far] was built on the idea that I wanted to go to UCLA. I learned how to network, how to ask for help, but most importantly, how to be comfortable with being uncomfortable.” 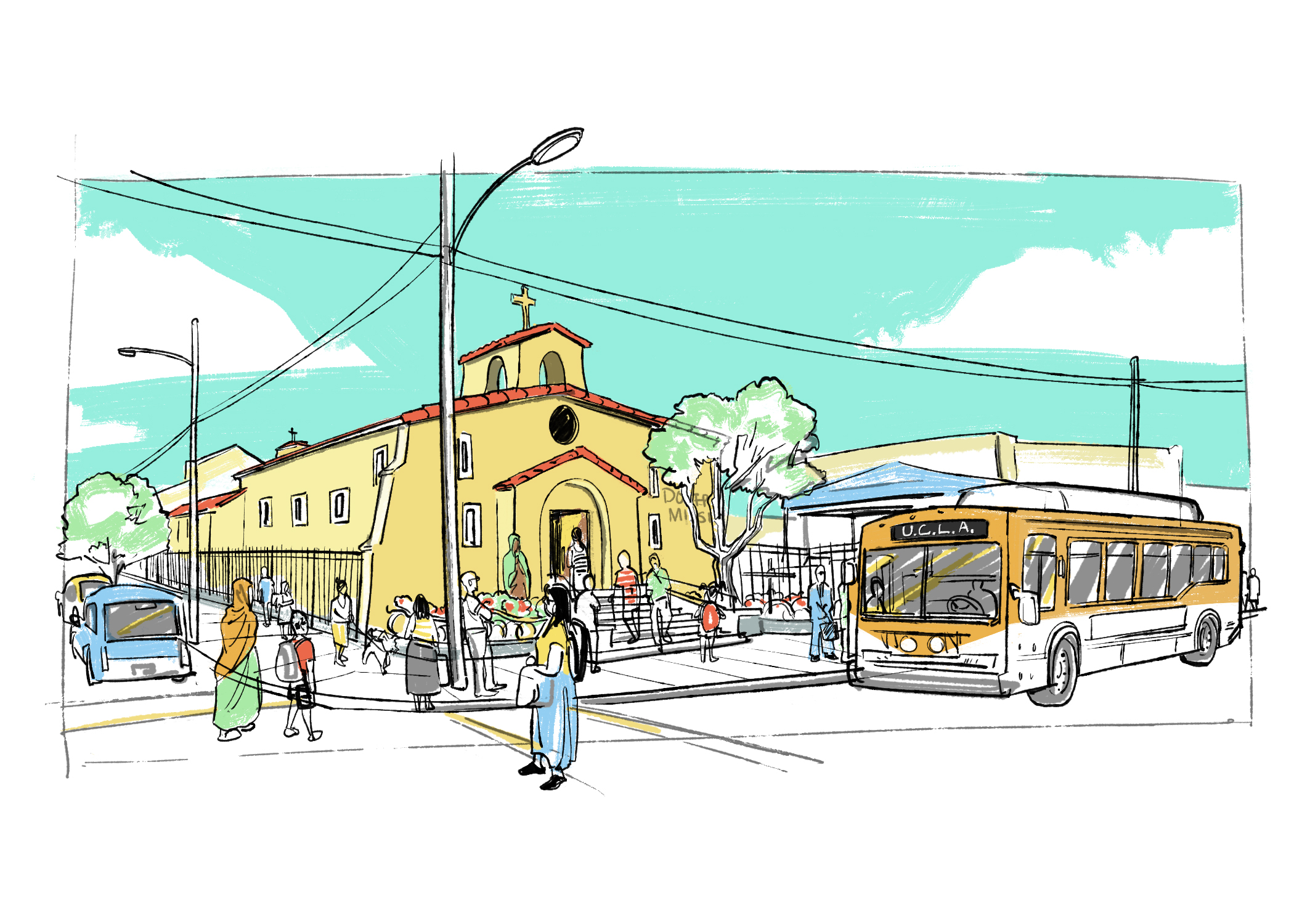 A Roster of Stars

Over the generations, through UCLA, students from Boyle Heights have pursued state-provided education to become judges, leaders of industry, corporate giants, activists in community and cultural life, power brokers in politics and pioneers at the leading edges of their fields.

Among them was Edward Roybal ’73, a leader in the Latino community, an advocate for higher education and a member of the U.S. House of Representatives for more than a quarter century.

Paul Terasaki ’50, M.A. ’52, Ph.D. ’56, born into a poor immigrant family in Boyle Heights, spent his youth in a Gila River, Arizona, internment camp. After earning three degrees from UCLA, Terasaki became a professor of surgery there. He was a pioneer in organ transplant medicine, developing what became the internationally accepted standard for tissue typing.

“I am eternally grateful for the concept of a public university that made it relatively easy for me to get a good education.”

The list of former students also includes U.S. Circuit Judge Harry Pregerson ’47; founding Getty Trust president Harold Williams ’46;  A. Wallace Tashima ’58, the first Japanese American to be appointed to the U.S. Court of Appeals; and many others.

From Luskin’s generation, there are also other leading philanthropists from Boyle Heights, including Morton La Kretz ’48, Gene Rosenfeld ’56 and Ralph Shapiro ’53, J.D. ’58, who credit their UCLA education for having given them the confidence and abilities to rewrite their futures. Their names are familiar to anyone who spends time on the UCLA campus.

“UCLA has drawn from Boyle Heights, but we have also given back to it in research, student projects and other kinds of engagement,” says Abel Valenzuela Jr., a Boyle Heights native who is a UCLA professor of Chicana/o and Central American studies, as well as of labor studies and urban planning.

Valenzuela, who is also director of UCLA’s Institute for Research on Labor and Employment, sends incoming UCLA transfer students to Boyle Heights to hone their observational skills and to identify community assets and positive activities in under-resourced neighborhoods. The project helps students learn about the historical, economic and ecological processes at work in the community.

The assignment harks back to a project of 20 years ago in which Valenzuela directed his students to map community assets in Boyle Heights, and to then produce research that could be used for future intervention strategies by local residents and community-based organizations.

And UCLA historian Caroline Luce M.A. ’09, Ph.D. ’13 was chief curator of an information-rich digital exhibit, “The Jewish Histories in Multiethnic Boyle Heights,” tracking the history of Jewish life in the community.

Throughout the 20th century, newcomers to Boyle Heights were intent on achieving educational and social advancement, says UCLA professor David Myers, the Sady and Ludwig Kahn Chair in Jewish History and director of the UCLA Luskin Center for History and Policy. “UCLA was seen as a central gateway to that goal.”

Valenzuela adds, “Boyle Heights became an important receiving space for so many groups over its history. You could find a Jewish synagogue in the neighborhood or walk to a Japanese temple. There was a Seventh Day Adventist church on one block and a Catholic church on another.”

“Education was almost a religion for this cohort of immigrants and their children. It was a sacred task, and UCLA, even in its early years, was a holy altar of that religion.”

And while many worshipped and socialized within ethnic enclaves, there were also many opportunities to interact with those of different cultures and ethnicities. Thus, Boyle Heights became “a really fascinating laboratory for cultural and social coexistence,” says Myers. “These enclaves were not impermeable. The borders were open so you could move, in some sense, in between.”

The late Williams once recalled, “We all celebrated each other’s holidays.”

Living in a hardscrabble, immigrant community, says Valenzuela, drove people to learn how to work together in a diverse environment. “The idea that we can’t solve problems because of our differences … that gets thrown out the window, because we grew up in these spaces where differences were just a part of life.”

Immigrant families saw education as “absolutely indispensable, not just to one’s economic advancement, but to being Americans,” Myers says. “Education was inextricable [from] the vision of what America represented to this generation that imagined a better world, a world in which not just the individual did better, but the collective did better.”

He adds, “Education was almost a religion for this cohort of immigrants and their children. It was a sacred task — and UCLA, even in its early years, was a holy altar of that religion.”

The timing was also opportune. The state of California was making a genuine investment in public education to assure immigrants’ successful transition to being productive citizens, Myers says.

Boyle Heights’ Roosevelt High School “catered to this high-achieving, educationally hungry immigrant and first-generation population,” Myers says. And while there was racial tension among the students, these young people and their families shared a common bond forged by a shared history of financial instability, discrimination and persecution. Roosevelt became a pipeline to UCLA. 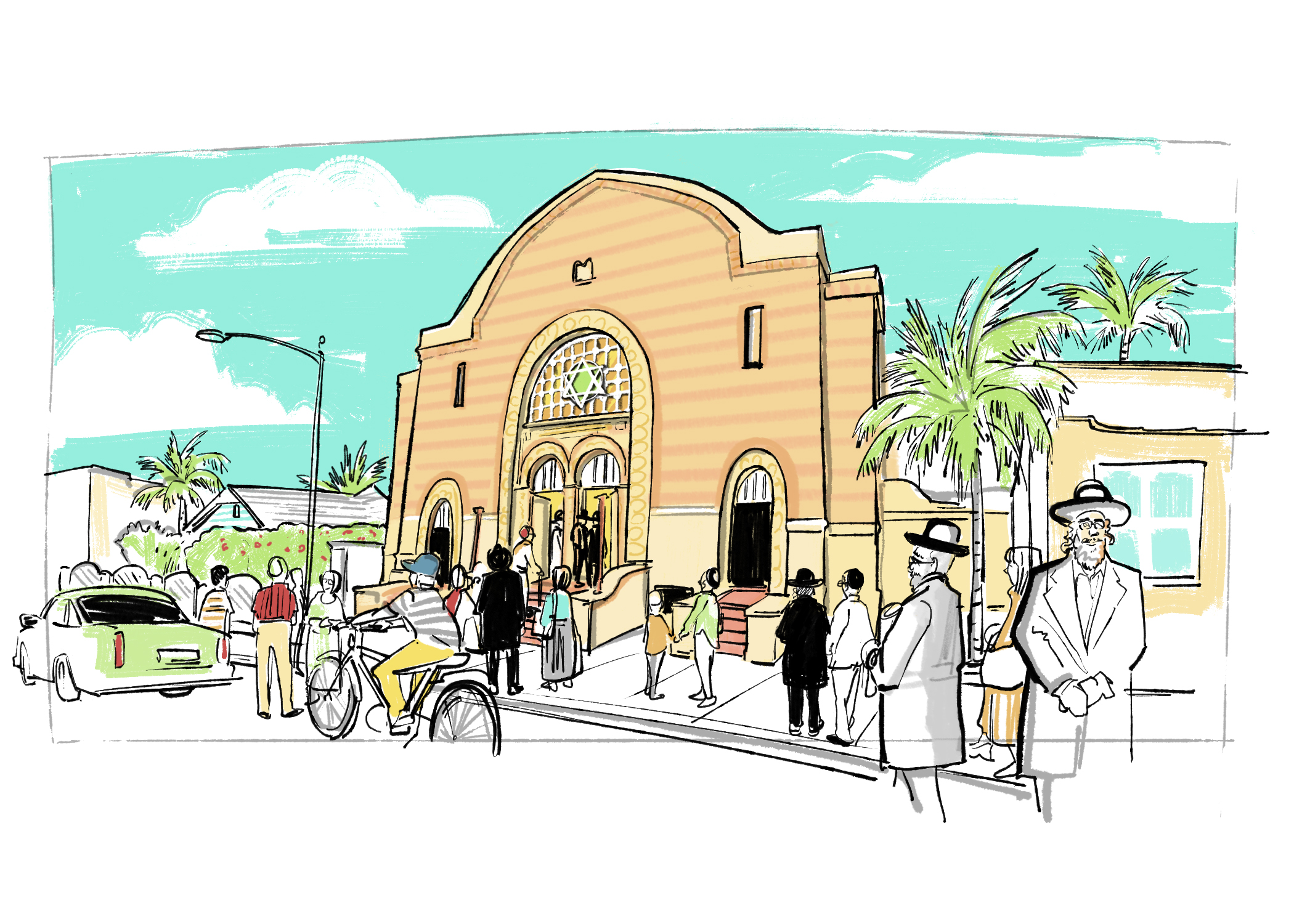 Today, Boyle Heights is a different community from the one Meyer Luskin left. From 1946 to 1961, five freeways were constructed in and around the area. To accommodate these transit networks and public housing projects, around 10,000 structures were demolished between 1946 and 1965, displacing an estimated 17,000 people.

By the 1960s, the majority of residents were Mexican American. Today, Boyle Heights is a resilient community, hardened by its history with episodes of social and economic marginalization, redlining, police violence, protests against inequitable wages and educational resources, and gentrification. The community is more than 93% Latino, and 35% of those are noncitizens.

And many Roosevelt students still see UCLA as their dream school, says Roxana Dueñas M.Ed. ’09, Roosevelt teacher and student advisor. And teachers direct students to organizations such as College Track that mentor and support students in Boyle Heights to be competitive enough to apply to schools like UCLA.

Many of Roosevelt High’s teachers were trained at UCLA. Dueñas says, “We always have student-teachers working here or collaborating with the UCLA school of education. Both of our principals are UCLA alums.”

Says Myers: “The students from Boyle Heights today come from a different ethnic and cultural world than Meyer Luskin did, but they still see UCLA as a gateway to opportunity. That’s part of UCLA’s DNA — that we will always be a pipeline not just for those who can afford it, but for those who add richness, texture, cultural vitality and intellectual distinction to our community.”