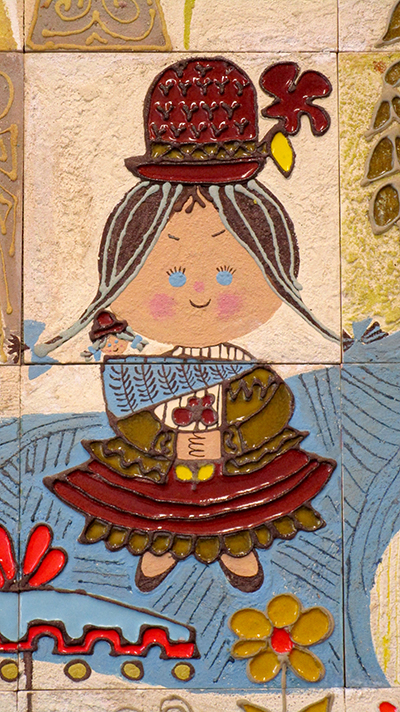 When the UCLA Stein Eye Institute opened in 1966, it featured a whimsical mural in the children’s waiting room that depicted figures of children from around the world. Designed to soothe young patients’ fears as they awaited treatment, the mural had been commissioned by Walt Disney, a friend of the institute’s founders Dr. Jules Stein and his wife Doris Stein. The artwork was created by Mary Blair, one of the original Disney Imagineers and an art director who had worked on Alice in Wonderland and Cinderella.

At the center of the mural is a beloved clock. For decades, however, the hands of the clock stood still, and over that time the mural’s ceramic tile wall lost its original sheen.

In 2018, Andrea Morse Straus ’72, an art conservator who had restored important artwork in the Franklin D. Murphy Sculpture Garden on campus, helped with the mural’s restoration. She says that following in the path of “Uncle Walt” was an extraordinary delight, reviving the original glossy gleam to the tiles — an effect that Blair had compared to a watercolor painting.

Meanwhile, restoring the clock ended up being simpler than expected.

“We peered down into the darkness in the wall between the reception room and the examination room with [the light from] a cellphone,” says Victoria Steele ’74, M.L.I.S. ’81, curator emerita of UCLA’s public art collection, who helped arrange the restoration. “Someone had cut a single wire, probably accidentally, so we replaced it. And just like that, the clock started ticking again. It was a wonderful moment.”