A library collection, a garden, a building and a clinic. These bear the names of four extraordinary women who joined UCLA during its first 50 years. All four were famous in their time. Yet today they are mostly forgotten, little known on the campus where they worked and taught.

The first woman to join the Directors Guild of America, Dorothy Arzner was known for her resourcefulness and her ability to coax star performances from unknown actors. She also is often credited with the invention of the boom microphone, improvising with it as director of The Wild Party in 1929. She cast Rosalind Russell, Lucille Ball and Katharine Hepburn in breakout roles. And Arzner, with her short hair, tailored suits and a distinct lack of makeup, was unafraid of the “butch” label.

In a Hollywood career that stretched from 1919 to 1943, Arzner is credited by name as director of 16 features, most famously Christopher Strong. She also wrote scripts and edited. Film Professor Nancy Richardson calls her “an incredibly fearless individual” and says she admires Arzner’s “full-bodied, amazingly drawn, complicated female characters.” It was as a UCLA film student herself that Richardson learned about Arzner, but she never knew about the director’s connection to UCLA.

“I think in general there is a lot of forgetting about women,” Richardson M.F.A. ’96 says. The films Hidden Figures (about black female mathematicians at NASA) and Be Natural (about French filmmaker Alice Guy-Blaché) are recent examples of setting the record straight.

Arzner’s connection to UCLA began in 1959 or 1960. Like her year of birth — variously reported as 1897, 1898 and 1900 — the years that Arzner taught at UCLA are difficult to verify. But the UCLA General Catalog listed her as a lecturer every year from 1960–61 through 1964–65. Perhaps her lack of academic credentials — she never finished college — kept her from promotion to assistant professor.

We also know that Arzner’s students included a promising young filmmaker named Francis Ford Coppola M.F.A. ’67. When Paramount named a building in Arzner’s honor, Coppola recalled Arzner’s feeding him crackers and encouragement. She told him: “You’ll make it, I know. I’ve been around,” he told reporters.

The Dorothy Arzner papers, which are held by the UCLA Library, are a treasure trove for film and LGBTQ scholars. Judith Mayne’s Directed by Dorothy Arzner incorporates 42 still photos and newspaper clippings from the Library’s collection. In 2015, the UCLA Film & Television Archive celebrated Arzner’s legacy with a major retrospective.

Every campus map bears the name of Mildred Mathias: UCLA’s botanical garden was named in her honor in 1979. But the scope of her work stretches far beyond the garden she directed for almost 20 years. 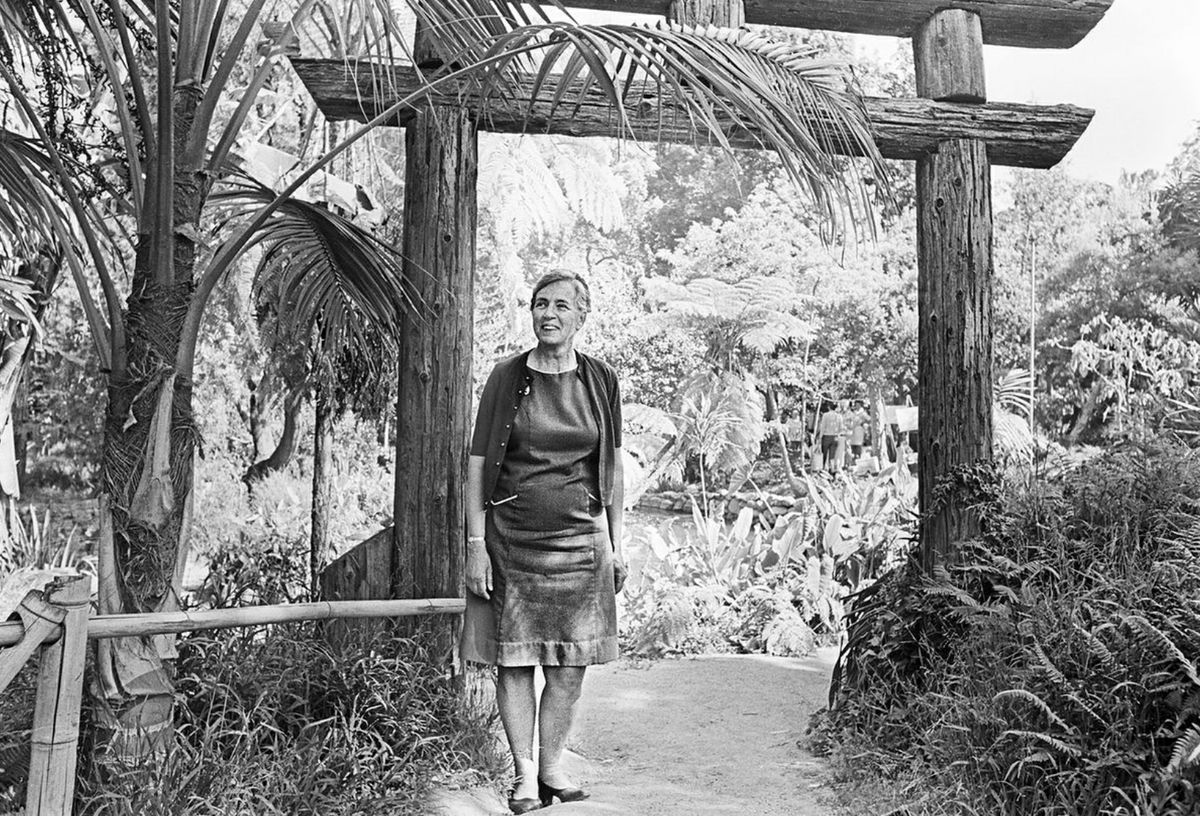 ASUCLA
Mildred Mathias was a pioneering horticulturalist, botanist and conservationist who began her UCLA career in 1947.

An expert on plant taxonomy, Mathias changed landscape gardening in Southern California by introducing subtropical plants that would thrive in coastal and desert Southern California. A pioneer in ethnopharmacology, she made expeditions to Amazonian Peru and Ecuador, Tanganyika and Zanzibar, where she learned about drug plants from native herbalists and healers.

She was a pioneer in conservation efforts as well, credited with saving Santa Cruz Island and playing a key role in the founding of the University of California Natural Reserve System. Long before the term ecotourism was invented, Mathias was leading UCLA Extension groups off the beaten track to learn about and experience nature in more than 30 countries, including Chile, Costa Rica and the Peruvian Amazon.

UCLA alumnus and donor Morton La Kretz ’48 remembers taking a group trip to Costa Rica escorted by Mathias. In 2013 and 2014, he donated $6 million to the renovation of the botanical garden, where he once took water samples as a student. In explaining his generosity to the garden, La Kretz spoke of the importance of conservation, plant diversity and protecting the environment for future generations, calling the garden “a great asset.”

Mildred Mathias earned her Ph.D. in 1929 and became a fellow of the prestigious American Association for the Advancement of Science in 1931. While she continued her research, she did take years off to travel and to raise a family with her physics professor spouse. When she came to work at UCLA in 1947, she held a staff position as an herbarium botanist. In 1951, she became a lecturer; four years later, an assistant professor. In 1956, Mathias was appointed director of the Botanical Garden and served in that role until her retirement in 1974.

A bronze plaque near the garden notes Mathias’ “remarkable legacy of horticultural, botanical and conservation achievement and a wide trail of friendships around the world.” The garden pavilion includes an exhibit about Mathias, and the garden’s website offers an extensive biography, photos and a video.

In his oral history, UCLA Chancellor Vern Knudsen talks about Lily Bess Campbell’s prestige: “Whenever I referred to our English department at UCLA in conversations with English scholars in Europe as well as at American universities, they’d say, ‘Well, that’s where Lily Campbell is.’” 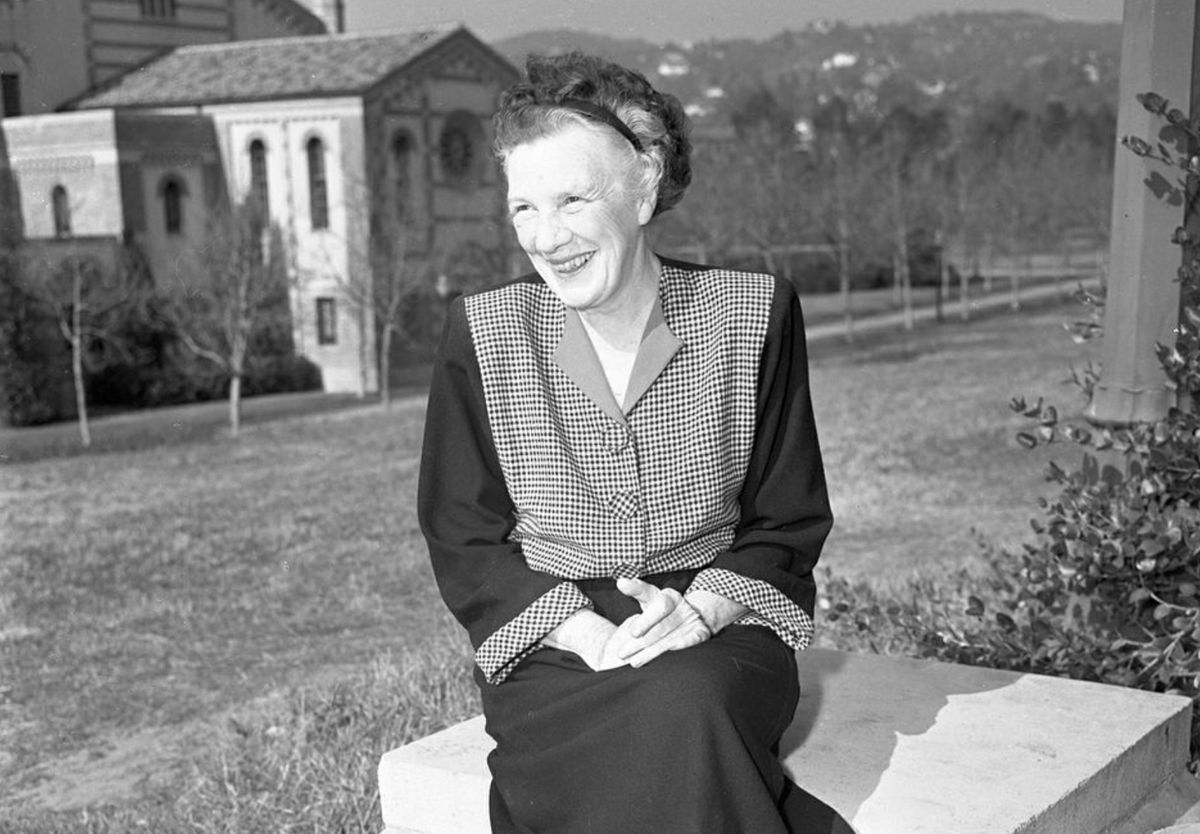 Yet when Campbell came to UCLA in 1922, she was classified as an “instructor,” the lowest rung on the academic ladder. In 1923, the Cambridge University Press published her dissertation as Scenes and Machines on the English Stage During the Renaissance, establishing her expertise in Elizabethan drama. In 1924, she was promoted to assistant professor.

Campbell must have been dismayed by the meager library at UCLA’s Vermont Avenue campus. The year she arrived, students held a fundraiser to buy the library its first copy of the Oxford English Dictionary. But Campbell soon discovered that the Huntington Library in San Marino had the books and manuscripts she needed for her research. Weekly trips to the Huntington followed, and in 1930 Campbell published Shakespeare’s Tragic Heroes: Slaves of Passion. The book radically altered modern thinking about Shakespeare’s tragedies. Campbell was promoted to full professor in 1931. Her 1947 Shakespeare’s Histories: Mirrors of Elizabethan Policy was just as influential.

Distinguished Professor of English Robert Watson works in the department that Campbell did so much to build, and he knows Shakespeare’s Tragic Heroes. But even after 30 years at UCLA, he didn’t realize that UCLA’s Campbell Hall was named in her honor.

Perhaps Campbell would be pleased to know that both the University of Chicago, where she earned her Ph.D., and UCLA, where she taught from 1922 to 1950, are today considered “Top 10” English programs. “The literary canon is far more diverse today than it was when Campbell taught,” Watson says. “But UCLA still has excellent Shakespeare scholars and teachers. They explore the religious and legal contexts of Elizabethan society as well as issues of race, gender and sexuality, and sometimes use new computer-aided techniques to reveal significant language patterns in the plays.”

Among Campbell’s students was future choreographer Agnes de Mille, who earned an English degree in 1926. De Mille biographer Carol Easton describes a “love affair of the mind and spirit” between de Mille and Campbell. Under Campbell’s influence, de Mille became more independent of her mother. Campbell’s only novel, These Are My Jewels, published in 1929, is the story of a mother who smothers her children with love and guilt.

In 1935, Campbell was the first woman selected to deliver the UCLA Faculty Research Lecture. More than 50 years would pass before historian Joyce Appleby became the second woman so honored. In 1951, just after her retirement, Campbell was selected as a Guggenheim Fellow.

Campbell’s papers, like Arzner’s, are in the Special Collections of the UCLA Library. As with Mathias, Campbell’s name appears on campus maps. But even in the English department, she is largely forgotten.

A profile in the 1921 Cub Californian called her a “famous psychologist,” then proceeded to chronicle the accomplishments of her father and four brothers. A 1948 story in Time magazine championed her work, but referred to her as “kindly, frowzy Grace Fernald.” 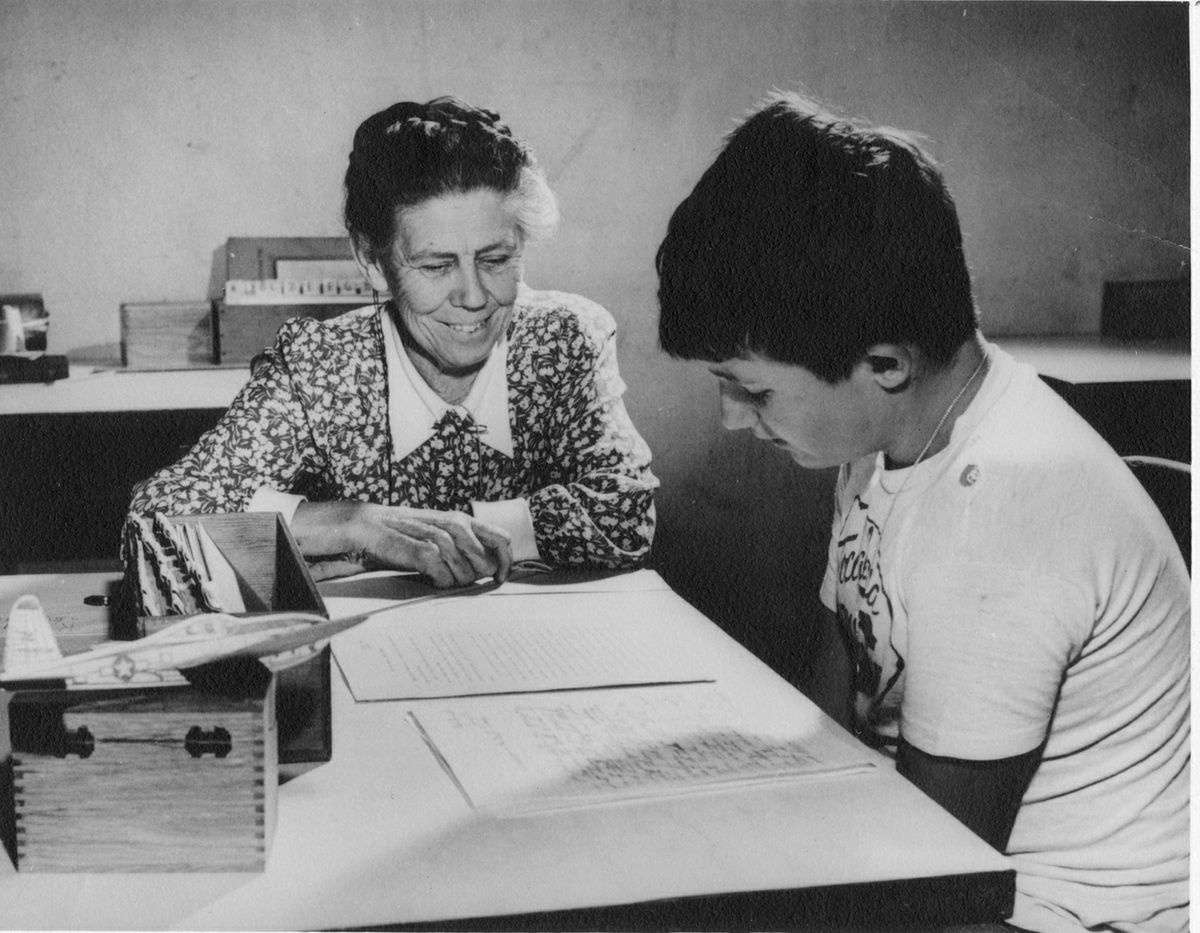 It’s difficult to read about Grace Maxwell Fernald without concluding that her career suffered from gender bias. Like Lily Bess Campbell, Fernald earned a Ph.D. from the University of Chicago. Like Mildred Mathias, she was elected to the American Association for the Advancement of Science — in 1935, when fewer than 10% of newly elected fellows were female. But her climb up the academic ladder was painfully slow.

When Fernald began her career at the Los Angeles State Normal School, she was the only faculty member listed for psychology. In 1918, a year before the Normal School became a University of California campus, she became an assistant professor in a department known as Education, Psychology, and Sociology. Her two fellow psychologists were both female, both classed as instructors. In 1920, Fernald became an associate professor, and the next year she founded the first clinic school in the U.S. for children and adults with learning disabilities.

In 1924, Shepherd Ivory Franz came to UCLA as a full professor and the first chair of the Department of Psychology. The other four faculty members were female, and campus publications joked about Franz and his “harem.” Fernald waited 20 years for promotion from associate professor to full professor. During those 20 years and afterward, her clinic taught hundreds of elementary school students how to read. Her book Remedial Techniques in Basic School Subjects, published in 1943, has been reprinted countless times.

Decades later, Jack Barchas wrote a heartfelt remembrance of Fernald’s impact on his life. He had always wanted to be a doctor, but his second-grade teacher told his father it was impossible because he couldn’t learn to read. His parents took him to Fernald.

Her approach — the root of what is now called the multisensory technique — involved dictating stories, seeing the words printed on big cards, tracing the words in the air, and reading them aloud. Eventually, Barchas became an avid reader. He did become a doctor and the dean for neuroscience and research at the UCLA medical school.

“I did not know her as a leader in her field,” Barchas wrote. “Rather, I knew Dr. Fernald as a teacher who clearly loved helping children who had problems, and who — with my two remarkable parents — made possible for me the future I dreamed of.”

Psychology Professor Howard Adelman ’60, M.A. ’64 is well acquainted with Fernald’s work, and he talks about it to students in his Psych 132A class “Learning Problems, Schooling Problems.” He admits that few of his colleagues in the psychology department have heard of Fernald. “But her techniques are widely used all over the world,” he says. “Her book is considered a classic.” One reason Fernald is better known around the world than on campus is that her work is “more education than psychology,” he says.

UCLA has seen many changes since Arzner, Mathias, Campbell and Fernald taught here. The Theater Arts Department is now the School of Theater, Film and Television. Botany and Zoology were replaced by the Department of Ecology and Evolutionary Biology. Psychology and English are still departments in the College of Letters and Science.

A bigger change is the ratio of female faculty. Film, Television and Digital Media is 40.1% female. Ecology and Evolutionary Biology is 35.3% female. English is 46.6% female. Psychology is 51.5% female.

So women are no longer the exception. Perhaps that’s what’s important to remember.