Curiosity and Perseverance. The names of two NASA rovers currently exploring Mars could also sum up UCLA’s contributions to the latest missions to our planetary neighbor.

The university has been part of the nation’s space exploration efforts since the 1960s Apollo program. Thus far, eight Bruins have flown in space, among them Megan McArthur ’93, the mission pilot on this year’s SpaceX Crew-2 Dragon’s flight to the International Space Station.

UCLA expertise is making a difference on board both the Curiosity and Perseverance rovers, while taking the 2020s concept of “remote work” to extreme lengths. Communicating across 140 million miles with Perseverance, which soft-landed in spectacular fashion in February 2021, Professor David Paige is leading an experiment to collect soil samples that could ultimately help answer the seminal question about the planet: Is there, or has there ever been, life on Mars? 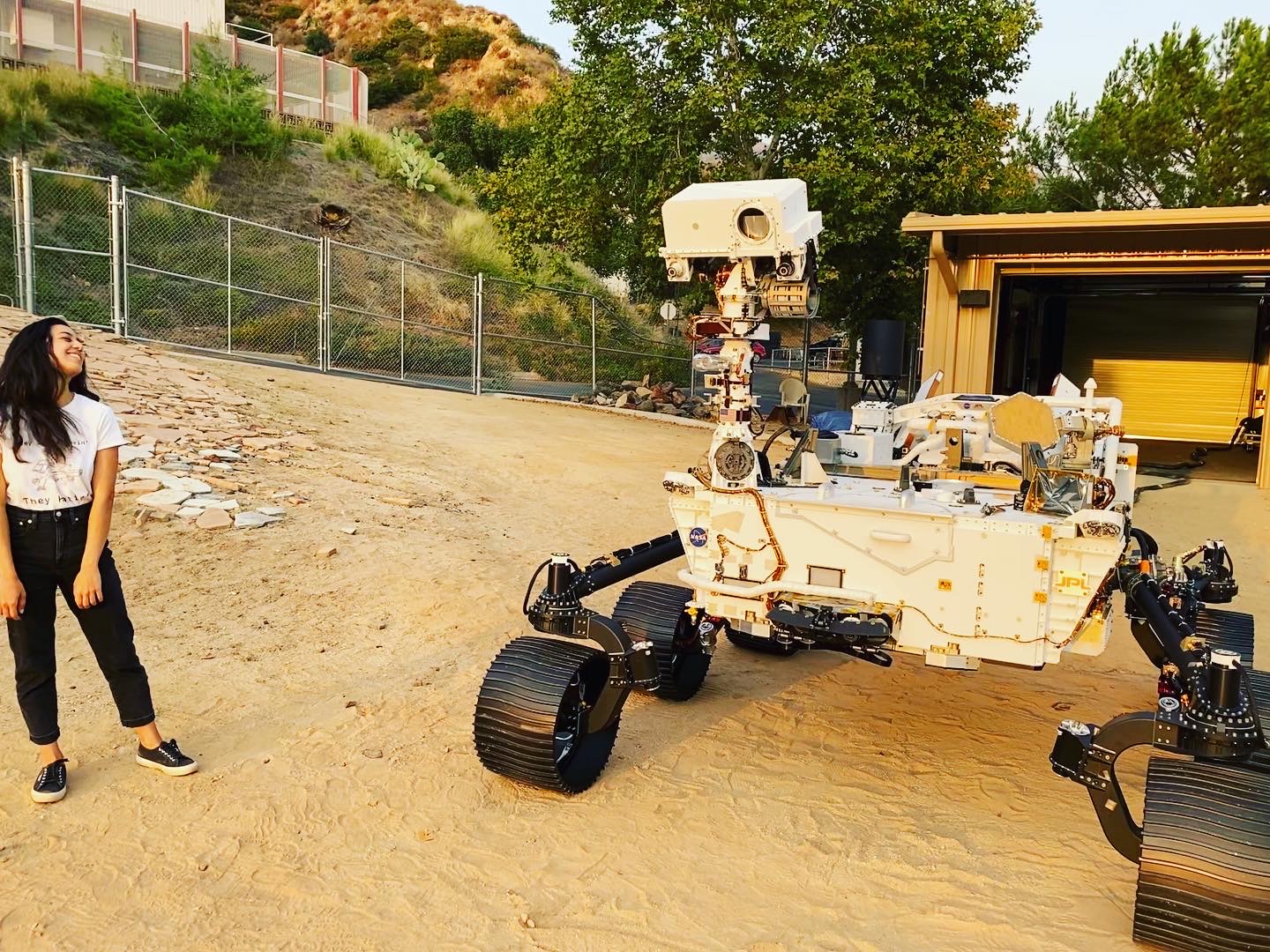 At the rover’s mission operations center at the NASA Jet Propulsion Laboratory (JPL) in Pasadena, Anais Zarifian ’16 is analyzing data and images coming back from Mars. What her team learns will enable engineers to build better, more durable rovers for future missions.

Ashwin Vasavada ’92, JPL’s lead scientist on the Curiosity mission, leads a global team of 500 scientists and 100 engineers. Since 2012, Curiosity has been doggedly exploring Gale Crater — which was probably once a lake the size of Connecticut and Rhode Island combined — and the slopes of Aeolis Mons, a 3-mile-high mountain carved into a peak by Martian winds. The rover is now more than eight years into a long journey that has very carefully covered 16 miles of the planet’s surface.

Both rovers are part of the same NASA imperative: to discover whether life has ever been supported by the planet, and if so, whether it could be again.

“We do have a singular focus on Mars,” says Vasavada, a former UCLA space sciences student. “It was a very Earth-like place 3.5 billion years ago. That makes me confident that life had a good chance of taking hold.”

Some NASA scientists believe that Mars could be mankind’s first home away from home, giving us a golden opportunity to start again.

The planet has a day-and-night cycle similar to that of Earth, soil for farming and a thin atmosphere, Vasavada says. Curiosity is still looking for telltale signs of how Mars lost its warmer, wetter climate 3 billion years ago. Was it a sudden catastrophe, or did those conditions just slip away? Curiosity finds interesting rocks, which it vaporizes with an infrared laser, analyzes via X-ray spectrometer and drills with the rover’s arm in the quest to find hidden secrets.

Not only has the rover’s technology enabled it to find potentially useful organic molecules of benzene and propane, but it has also proved its worth back here on Earth. L.A.’s Getty Conservation Institute is using technology derived from Curiosity’s X-ray system to examine artifacts from the volcanic ruins of the ancient Roman city of Herculaneum, near Pompeii. 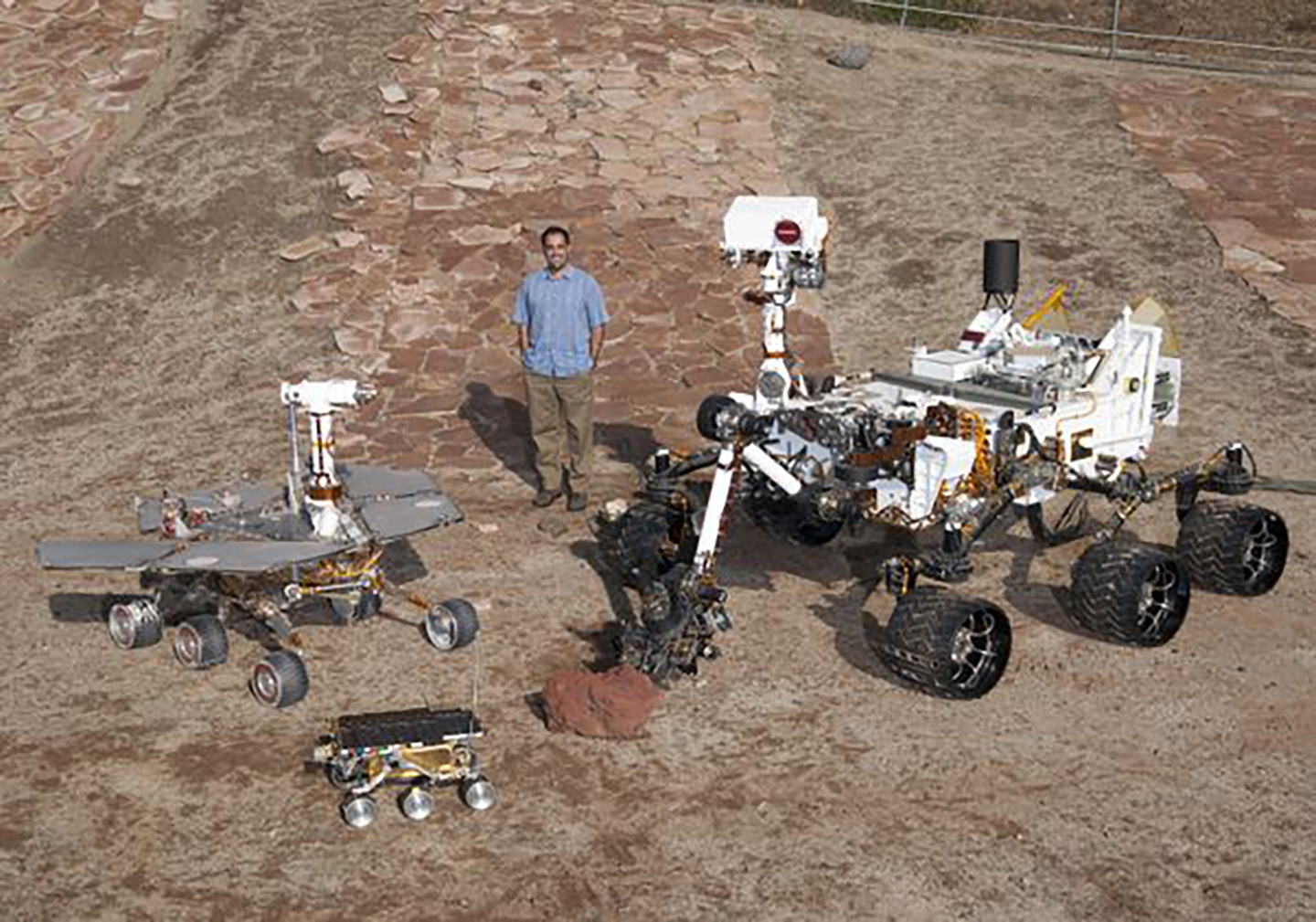 NASA/JPL-Caltech
Ashwin Vasavada with the Mars rovers in the Mars Yard at NASA’s Jet Propulsion Laboratory.

NASA has been sending autonomous probes to Mars since 1997, with each new mission more ambitious and more astounding in its achievements than its predecessors. Perseverance brought with it a helicopter called Ingenuity, which enjoyed a successful remote-controlled flight above the planet’s surface in April of this year — the very first powered, controlled flight on another planet.

Such advances are possible in part because of the painstaking work of Zarifian and her colleagues to ensure that NASA’s equipment can withstand the extraordinary demands of functioning on another planet.

“We learn how mechanisms function over the long term,” she says. When images revealed, for example, that Curiosity’s wheels had holes in them, a JPL team drove a prototype of the rover’s wheels and suspension over rocks in a Pasadena test bed until the point of failure.

“What makes it exciting is that you don’t know what you’re going to find,” says Zarifian, who interned at JPL during her sophomore year. “Perseverance is looking for signs of ancient life, which we have not found anywhere else. If we find that, it would be huge — it would show that life is not just some freak accident, that it’s possible in other places. I am so lucky to work on Perseverance — it was a thrill to see it land and be able to ‘talk’ to the rover that I was standing next to at JPL a little over a year ago.”

Paige, a UCLA professor of planetary science, is deputy principal investigator on the Perseverance RIMFAX (Radar Imager for Mars’ Subsurface Experiment), an experiment that is probing beneath the Martian surface of Jezero Crater. Investigations suggest that the crater once contained a lake, which was fed by a river that deposited sediments there.

“We don’t expect that the ground underneath the rover will still be wet,” says Paige, who warns against high expectations from NASA’s first Martian probes. But he hopes the samples being collected will be worth bringing back to Earth on a future NASA mission. “These samples will be the basis of much of what we understand about the planet.

“It is a real exploration process, sharing everything with scientists around the world, looking at our options,” he says. “It is important to find out enough about Mars so we can understand our impact on our own planet.”

NASA/JPL-Caltech
From left: This image was captured while NASA’s Perseverance rover drove on Mars for the first time on March 4, 2021. The first high-resolution color image to be sent from Perseverance’s Hazard Cameras after its landing on Feb. 18, 2021.

Vasavada says the real wild card in the future of Mars exploration is the commercial space race. “It’s hard to predict how quickly [SpaceX founder] Elon Musk will get his spaceships ready to go. Personally, I think there is a decent shot he will pass us by,” he says, adding that NASA remains focused on how to reduce risks for a possible human journey to the planet.

Whoever gets there first, it’s a safe bet that UCLA will still be part of the quest.

After all, the missions are connected at unexpected depths with the university. When Curiosity landed in August 2012, it settled in a site named after author Ray Bradbury, who typed his seminal novel Fahrenheit 451 in the basement of Powell Library. And the landing spot for Perseverance, 2,300 miles away, was named in honor of Octavia E. Butler, who honed her powerful sci-fi storytelling skills in UCLA Extension classes. Today, thanks in part to the ingenuity of Bruins, science fiction is becoming science fact.

Explore a 3D Model of Perseverance

NASA’s Perseverance rover is based on the Curiosity rover’s configuration. The car-sized Perseverance is about 10 feet long (not including the arm), 9 feet wide and 7 feet tall. But at 2,260 pounds, it weighs less than a compact car.