Walter Thompson-Hernández can’t even remember the last time he was inside the Metropolitan Park Twin Theatres in Huntington Park. He might have been 6 years old. Seven, maybe? As likely as not, he spent the whole movie dodging the popcorn the kids in the back were chucking down front. That’s the sort of mayhem his hometown theater was known for back then. Flying snacks, the occasional fistfight.

Three decades later, he’s back at Metropolitan Park Twin Two, and it’s surreal — not just because of how much life he’s lived since then, but because this time, it’s his own movie playing on the screen. If I Go Will They Miss Me — his very first film — won a 2022 Sundance Film Festival jury award. Now the short is part of the prestigious festival’s short-film world tour, and his hometown theater is an official stop.

He laughs, a warm, easy laugh, one that rolls out with as much disarming regularity as his frequent conversational check-in: “You know what I’m sayin’?” He’s laughing now not at the absurdity of the roll call (“It’s such a small community, you know what I’m sayin?”), but at the sheer joy of it all: his family, at a screening of the movie he wrote and directed. His community, having Sundance come to them. That doesn’t really happen here.

“Here” is the predominantly Latino, working-class neighborhood 20 miles southeast of UCLA’s campus. It isn’t just where Thompson-Hernández grew up. It also sits cheek by jowl with Watts, the setting of If I Go Will They Miss Me. The 12-minute film was inspired by the real-life jet-fuel dump by a Delta plane over the area in 2020. The dump showered schoolchildren and residents, mostly people of color, with thousands of gallons of toxic fuel — a catastrophe Thompson-Hernández, now based in L.A., felt viscerally. He’d grown up under the LAX flight path — watching those planes, breathing their fumes, dreaming of their destinations.

Watch the trailer to If I Go Will They Miss Me

The movie tells the story of 12-year-old Lil’ Ant, who is growing up in Watts’ Imperial Courts projects under that same LAX flight path. The boy is enraptured by flight — fascinated by the mythical flying horse Pegasus and obsessed with the omnipresent planes and the faraway worlds they represent, even as news of the fuel dump reverberates in the background of his life. The world that Thompson-Hernández composes in the film is both fantastical and profoundly real. Its characters hold dreams you don’t see so much as feel — and it’s all laid out in less time than you spend scrolling Netflix for your Friday-night flick.

If it seems remarkable, even improbable — a first-time filmmaker with this movie, these accolades, a line of people winding around his childhood theater — you should understand that this is what Thompson-Hernández does best, what he’s spent his entire life doing. Long before he started making movies, he was busy, always busy — as a journalist, a podcaster, an author, a UCLA doctoral student — digging into some sliver of the world and coming up with a story about the fascinating, flawed and hopeful humanity inside it.

For Walter Thompson-Hernández, it all started at UCLA — not when he was a student himself, but when his mother, Eleuteria (Ellie) Hernández ’88, M.A. ’90, was. She was pregnant with Walter while she was working on an undergraduate degree in Chicana/o literature. She sat in her calculus class, trying to concentrate, and the baby would kick so hard (“Those feet in my bones!” she says) that she’d have to leave. But in lit class? History? No such protests. And that, as family lore has it, was the first sign of where Thompson-Hernández was headed.

Now 37, Thompson-Hernández has lived about a dozen lives since then, though you wouldn’t know it by looking at him. He’s youthful in appearance, with dark eyes set deep under expressive brows; thick black hair cut into a fade; a shadow of a mustache. The son of a Black father and a Mexican-born mother, Thompson-Hernández identifies as Afro-Latino, though it’s the Latino side that shaped his cultural identity in his earliest days. His parents split up before he was born; his dad wasn’t a part of his life until later on. He grew up with Ellie and her family — an aunt, two uncles, some cousins.

It was Ellie’s sister, in fact (his aunt and “second mother”), who first paved the family road toward UCLA, Thompson-Hernández says — “This first-generation Mexican immigrant woman who went back to school at age 32, to community college, and then to UCLA to major in Italian studies, of all things.” UCLA would be a throughline of his life: His parents both transferred there as undergrads, and both went on to pursue doctorates there. As a grade-schooler, Thompson-Hernández attended the UCLA Lab School, and because of that — and because his mom didn’t have money for babysitters — he practically grew up on campus.

When, in 1993, Ellie joined a hunger strike to save UCLA’s Chicana/o studies from the chopping block, there was 7-year-old Walter, camping out with the group, documenting it all with his mom’s old Canon camera like the future journalist he was. Not only did the activists save the department, but Ellie Hernández has worked in it for 21 years as a student advisor. (When her son arrived back at UCLA in 2016 on a Eugene V. Cota-Robles Fellowship, she advised him.)

Then there was the storytelling. As a tiny boy, long before he was in school, Thompson-Hernández would sit enthralled as his relatives told him the elaborate folk tales and ghost stories they remembered from their childhood. They were natural storytellers, intuitive narrators who wove beautiful, complex tales “with texture and character arcs and tensions. You know what I’m sayin’?”

These were the things that shaped him — UCLA, his family’s expert storytelling, the tradition of Latin American magical realism, his mother’s love of books.

It all sounds charmed enough, this humble but loving life they shared, but there were thorns among the roses, Ellie Hernández says. Her son was a good kid — creative and compassionate, fascinated with the world around him — but he found trouble as a teen. He got kicked out of school, lost friends to violence. That Thompson-Hernández was eventually able to pull himself off this dark path, she says, was in large part due to an obsession with basketball, which helped motivate him to get back to school and keep his grades up. And he was good — good enough to play Division I ball at the University of Portland, and good enough to go on to play professionally in Latin America. 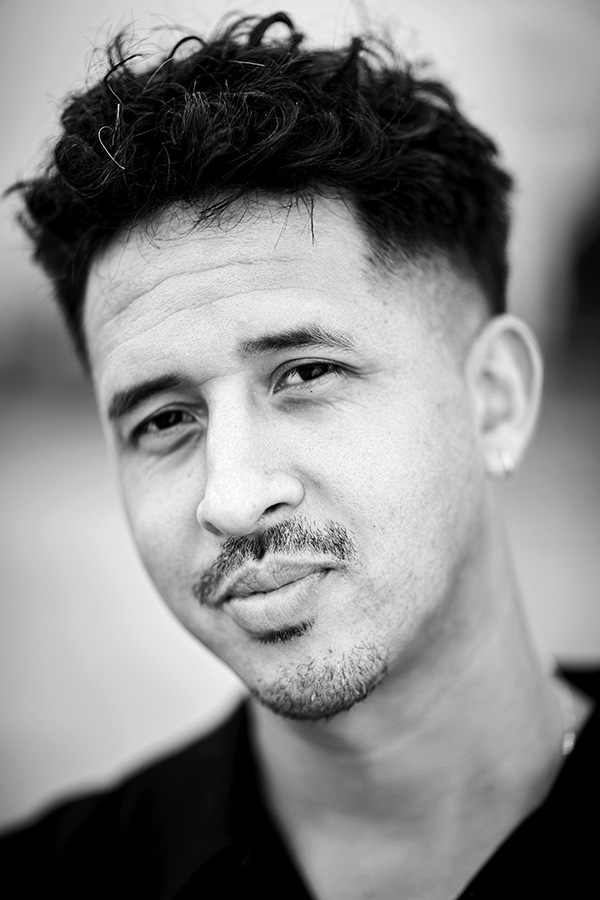 After an injury sidelined his athletic career in 2012, Thompson-Hernández landed back in California, diving into storytelling of his own via multimedia journalism, and earning a master’s degree in Latin American studies from Stanford. In 2016, he was accepted to multiple Ph.D. programs, but he found himself drawn back to UCLA to study in the César E. Chávez Department of Chicana/o and Central American Studies. To be back in the department where his mother had once studied, to be with the “incredible professors” the school offered all felt beautifully full circle to him. “Like a homecoming,” he says.

By 2018, though, journalism — and a job with The New York Times — would, for the moment, win out over academia. Thompson-Hernández made a name for himself as an award-winning podcaster and journalist. His job as a multimedia reporter took him around the world to cover global subcultures — an albino community in Ghana, African-American churchgoers in the Dominican Republic, a group of Black horseback riders on a renowned ranch in Compton. The latter story would beget Thompson-Hernández’s first book. Compton Cowboys, published by HarperCollins in 2020, showcased its author’s talent for vivid, enveloping storytelling. “An eye-opening, moving book,” raved Margot Lee Shetterly, the author of Hidden Figures.

Looking at Thompson-Hernández’s impressive and varied body of work, it’s easy to characterize him as a teller of the untold stories, a man who seeks out the underrepresented people of the world. (Journalists who have profiled him have done exactly that.) There may be some merit to that: Many of his stories examine the lives, loves and struggles of people of color, he notes, people who “look like me, or view the world through a somewhat similar lens.” But he’s also deeply wary of being framed as any kind of “champion for the voiceless.” He cringes at the phrase. “No. That’s weird to me.”

Truth is, he says, “I’m really just talking about the human experience.” It’s the way he thinks about stories. “I’m creating things that remind us what it is to be human.”

The transition from journalism to film was a long time coming. Everything in Thompson-Hernández’s life — his upbringing, his work in academia, his writing, his podcasting — has led him here. Even basketball, that seeming twist in his tale, has been grist for the storytelling mill: The sport pulled him close to acclaimed cinematographer Michael “Cambio” Fernandez, who shot If I Go. The two men first bonded on a court, playing ball and talking art.

In Thompson-Hernández, Fernandez sees a rare mindfulness and empathy. “He shows up as himself,” he says, “and he shows up with real love for anything he’s involved in.” He also shows up early. “He’s like, ‘Let’s get up at 5 a.m. and go shoot!’” the cinematographer says. “That’s the discipline and work ethic he has.”

Thompson-Hernández is currently working on his second book, We Were Boys, a coming-of-age memoir that tackles his fraught, fractious teenage years. He’s also currently traveling for the Sundance tour, wrapping the adaptation of If I Go Will They Miss Me as a feature-length movie (expected release is late 2023), and finishing his second film as writer and director. That movie, titled Sky is Blue, centers on a favela drug boss in Rio, Brazil, who’s trying to organize a kite festival for the community.

In the meantime, his popular podcast, California Love, is being turned into an animated feature, he’s directing commercials (maybe you’ve seen his first, for the 2028 L.A. Olympics?), and he’s reading some of the many scripts (“really cool ones”) that have been coming his way since Sundance. It’s an exciting place to be.

“When I was at The New York Times, not everyone I knew could go beyond the paywall,” he says. Not so with Netflix, or Amazon. Film has a wider audience. But don’t get him wrong. “I don’t think it’s rooted in ego to want to have as many people as possible watch these movies or be affected by the things I make,” he says. “I think it’s placing importance on the people and on the story.”

That’s the point, after all. It’s always been the point — in school, in print, online, now in film. “Whenever I’m working on something, I’m just a medium,” he says. “I’m in service to the story. It’s always about the story.”

You know what he’s saying?