The Fowler Museum at UCLA is pleased to be the first museum in the United States to host a solo exhibition dedicated to the work of the late Cuban visual artist Belkis Ayón, whom during her short but fertile career, produced an extraordinary body of work central to the history of contemporary printmaking in Cuba.

“Nkame: A Retrospective of Cuban Printmaker Belkis Ayón” opens Oct. 2 and runs through Feb. 12, 2017. The exhibition presents 43 prints that encompass a wide range of the artist’s graphic production from 1984 until her untimely death in 1999. Ayón mined the founding narrative of the Afro-Cuban fraternal society called Abakuá to create an independent and powerful visual iconography. She is highly regarded for her signature technique of collography, a printing process in which a variety of materials of various textures and absorbencies are collaged onto a cardboard matrix and then run through the press. Her deliberately austere palette of subtle tones of black, white and gray add drama and mystery to her narratives, many of which were produced at very large scale by joining multiple printed sheets.

“For a black Cuban woman, both her ascendency in the contemporary printmaking world and her investigation of a powerful all-male brotherhood were notable and bold,” said Marla Berns, Shirley and Ralph Shapiro Director of the Fowler Museum. Nkame follows a lineage of Fowler exhibitions that have explored artistic representations and evocations of African-inspired religions in the diaspora, such as Sacred Arts of Haitian Vodou and Transcultural Pilgrim: Three Decades of Work by José Bedia.

“This is an important moment to spotlight the aesthetically stunning and poetically resonant prints of Belkis Ayón,” Berns continued, “especially with today’s heightened attention on Cuba and Cuban culture, and the historic reopening of diplomatic relations between the U.S. and Cuba.” 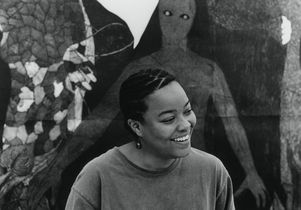 Nkame is organized by the Belkis Ayón Estate and Dr. Katia Ayón with the Fowler Museum and is guest curated by Cristina Vives, an independent curator and art critic based in Havana. The exhibition is arranged into five sections that examine major themes and periods of Ayón’s artistic production.

The introductory section begins with one of Ayón’s most iconic prints, “La cena”  (The Supper) from 1991, a work that encapsulates three defining features of the artist’s oeuvre. First, her choice of subject matter — the history, mythology, and iconography of Abakuá — was a direction she took in 1985 while still a student at the San Alejandro Academy of Fine Arts. This all-male Afro-Cuban brotherhood arrived in the western port cities of Cuba in the early 19th century, carried by enslaved Africans from the Cross River region of southeastern Nigeria. A brief synopsis of the founding myth of Abakuá begins with Sikán, a princess who inadvertently trapped a fish in a container she used to draw water from the river. The unexpected loud bellowing of the fish was the mystical “voice” of Abakuá, and Sikán was the first to hear it. Because women were not permitted this sacred knowledge, the local diviner swore Sikán to secrecy. Sikán, however, revealed her secret to her fiancé, and because of her indiscretion she was condemned to die.

In Ayón’s work however, Sikán remains alive, and her story and representation figure prominently. In “La cena,” which depicts an Abakuá initiation banquet with Sikán seated in the center, the artist reveals her syncretic approach. The work alludes to the Last Supper and the Christian apostles, but Ayón renders the event with women usurping the roles of men.

Second, “La cena” is also a superb example of the artist’s choice of collography as the technique for creating her narrative prints and intensifying their expressive potential. The exhibition includes Ayón’s complete matrix for “La cena,” which she rendered in six units to produce six printed sheets that were assembled together. The inclusion of the actual cardboard matrix allows visitors to see how Ayón developed her pioneering and labor-intensive process of “drawing” with unusual materials: chalk, varnish, acrylic, sandpaper, abrasives and different types of paper, using knives to obtain dark lines and scissors to cut the hundreds of patterns that she later glued to the surface of her cardboard matrixes. When they were inked and sent through a press, the artist achieved a range of forms, textures and tones. The third way the piece embodies Ayón’s approach is showing that after experimenting with color, she reduced her palette exclusively to white, black and gray. 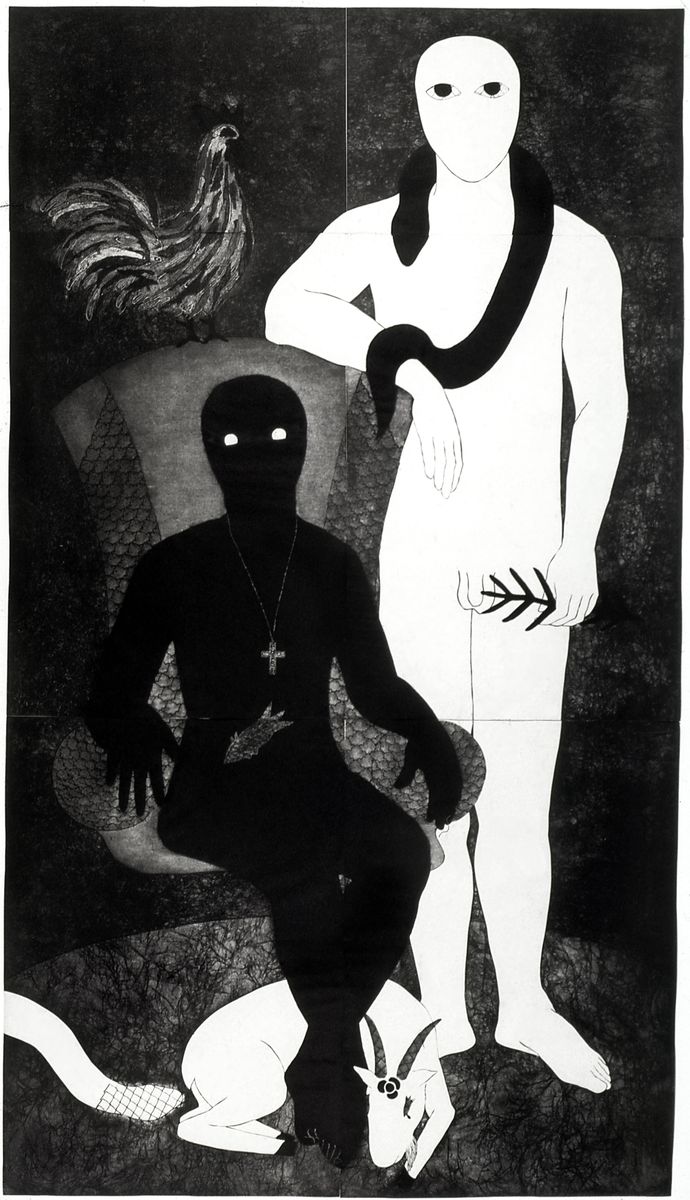 Two sections of the exhibition focus on the artist’s early prints, including pieces that capture the role Sikán played in the Abakuá narrative. Sometimes seated in a frontal position on throne-like furniture, the stylized figure of Sikán appears magisterial with her wide-eyed defiant gaze and no mouth. Ayón wrote,“I see myself as Sikán, in a certain way an observer, an intermediary and a revealer… Sikán is a transgressor, and as such I see her, and I see myself.”

The exhibition also features later works. From 1991 to 1998, Ayón produced large-format prints ranging from six to eighteen printed sheets. These pieces allowed her scenes and characters to reach almost life-size.

The final work in the exhibition is the monumental “Resurrection,” referring to the moment an initiate is born into his new life as a member of the Abakuá secret society. Created in 1998, this complex print in nine sheets encapsulates the power of the artist’s oeuvre: it offers references to Christianity and to the emotional life of the artist, and it comments on women’s rights and gender equality. Nkame, a word synonymous with “greeting” and “praise” in the language of Abakuá, is a posthumous tribute to the artist as well as a sweeping overview of her artistic career.

Nkame: A Retrospective of Cuban Printmaker Belkis Ayón is funded in part by the Pasadena Art Alliance with additional support from JoAnn and Ronald Busuttil, Carole and Alex Rosenberg, the Shirley and Ralph Shapiro Fund, the Southern California Committee of the National Museum of Women in the Arts, Susan Adelman and Claudio Llanos, Fabio Banegas and Charles Larson, Carolyn Covault, Jay Geller and Lowell Gallagher, Elizabeth and Graeme Gilfillan, Linda Kunik and Rodney Millar, Dallas Price-Van Breda, and the Charitable Foundation.

Ayón was born in Havana on Jan. 23, 1967. Her first solo exhibition in Havana, “Propuesta a los veinte años,” which means Proposal at the Age of Twenty, took place in 1988. In 1993 she participated in the 16th Venice Biennale and received the international prize at the International Graphics Biennale in Maastricht, Holland. Ayón’s work has been included in numerous group exhibitions and is in museum and private collections worldwide. The artist committed suicide in 1999 at the age of 32.

The Fowler Museum at UCLA is one of the country’s most respected institutions devoted to exploring the arts and cultures of Africa, Asia and the Pacific, and the Americas. The Fowler is open Wednesday from noon until 8 p.m., and Thursday through Sunday from noon to 5 p.m. The museum is closed Monday and Tuesday. The Fowler Museum, part of UCLA Arts, is located in the north part of the UCLA campus. Admission is free. Parking is available for a maximum of $12 in Lot 4. For more information, the public may call 310 825-4361 or visit fowler.ucla.edu.

Join guest curator Cristina Vives and the director of the Belkis Ayón Estate, Dr. Katia Ayón, for an opening day gallery tour of “Nkame: A Retrospective of Cuban Printmaker Belkis Ayón.” Vives and Katia Ayón, who is the artist’s sister, and draw upon their personal experiences of the artist and share insights into Belkis Ayón’s influence on contemporary Cuban printmaking.

These presentations offer an investigation of diverse aspects of Abakuá, the Afro-Cuban fraternal society that inspired Belkis Ayón’s art. UCLA professor of history and anthropology Andrew Apter will give a talk titled “Abakuá: Ritual Memory, and Sacred Geography in Cuba and Southeastern Nigeria” and independent art historian and curator Judith Bettelheim will speak about “The Public Face of Abakuá and the Work of Belkis Ayón.” A question-and-answer period follows.