A range of diseases — from diabetes to cardiovascular disease, and from Alzheimer’s disease to attention deficit hyperactivity disorder — are linked to changes to genes in the brain. A new study by UCLA life scientists has found that hundreds of those genes can be damaged by fructose, a sugar that’s common in the Western diet, in a way that could lead to those diseases.

However, the researchers discovered good news as well: An omega-3 fatty acid known as docosahexaenoic acid, or DHA, seems to reverse the harmful changes produced by fructose.

“DHA changes not just one or two genes; it seems to push the entire gene pattern back to normal, which is remarkable,” said Xia Yang, a senior author of the study and a UCLA assistant professor of integrative biology and physiology. “And we can see why it has such a powerful effect.”

DHA occurs naturally in the membranes of our brain cells, but not in a large enough quantity to help fight diseases.

“The brain and the body are deficient in the machinery to make DHA; it has to come through our diet,” said Fernando Gomez-Pinilla, a UCLA professor of neurosurgery and of integrative biology and physiology, and co-senior author of the paper. 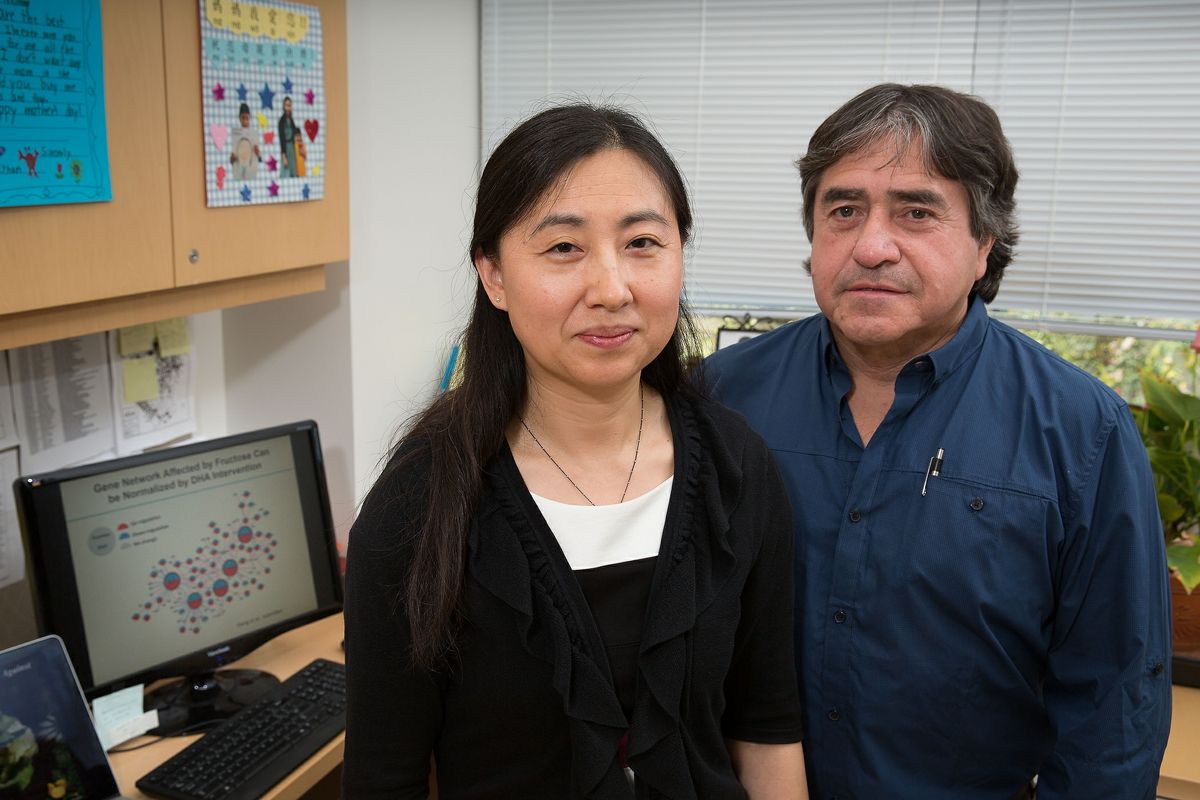 DHA strengthens synapses in the brain and enhances learning and memory. It is abundant in wild salmon and, to a lesser extent, in other fish and fish oil, as well as walnuts, flaxseed, and fruits and vegetables, said Gomez-Pinilla, who also is a member of UCLA’s Brain Injury Research Center.

Americans get most of their fructose in foods that are sweetened with high-fructose corn syrup, an inexpensive liquid sweetener made from corn starch, and from sweetened drinks, syrups, honey and desserts. The Department of Agriculture estimates that Americans consumed an average of about 27 pounds of high-fructose corn syrup in 2014. Fructose is also found is in most baby food and in fruit, although the fiber in fruit substantially slows the body’s absorption of the sugar — and fruit contains other healthy components that protect the brain and body, Yang said.

To test the effects of fructose and DHA, the researchers trained rats to escape from a maze, and then randomly divided the animals into three groups. For the next six weeks, one group of rats drank water with an amount of fructose that would be roughly equivalent to a person drinking a liter of soda per day. The second group was given fructose water and a diet rich in DHA. The third received water without fructose and no DHA.

After the six weeks, the rats were put through the maze again. The animals that had been given only the fructose navigated the maze about half as fast than the rats that drank only water — indicating that the fructose diet had impaired their memory. The rats that had been given fructose and DHA, however, showed very similar results to those that only drank water — which strongly suggests that the DHA eliminated fructose’s harmful effects.

The research team sequenced more than 20,000 genes in the rats’ brains, and identified more than 700 genes in the hypothalamus (the brain’s major metabolic control center) and more than 200 genes in the hippocampus (which helps regulate learning and memory) that were altered by the fructose. The altered genes they identified, the vast majority of which are comparable to genes in humans, are among those that interact to regulate metabolism, cell communication and inflammation. Among the conditions that can be caused by alterations to those genes are Parkinson’s disease, depression, bipolar disorder, and other brain diseases, said Yang, who also is a member of UCLA’s Institute for Quantitative and Computational Biosciences.

Of the 900 genes they identified, the researchers found that two in particular, called Bgn and Fmod, appear to be among the first genes in the brain that are affected by fructose. Once those genes are altered, they can set off a cascade effect that eventually alters hundreds of others, Yang said.

That could mean that Bgn and Fmod would be potential targets for new drugs to treat diseases that are caused by altered genes in the brain, she added.

The research also uncovered new details about the mechanism fructose uses to disrupt genes. The scientists found that fructose removes or adds a biochemical group to cytosine, one of the four nucleotides that make up DNA. (The others are adenine, thymine and guanine.) This type of modification plays a critical role in turning genes “on” or “off.”

The research is published online in EBioMedicine, a journal published jointly by Cell and The Lancet. It is the first genomics study of all the genes, pathways and gene networks affected by fructose consumption in the regions of the brain that control metabolism and brain function.

Previous research led by Gomez-Pinilla found that fructose damages communication between brain cells and increases toxic molecules in the brain; and that a long-term high-fructose diet diminishes the brain’s ability to learn and remember information.

“Food is like a pharmaceutical compound that affects the brain,” said Gomez-Pinilla. He recommends avoiding sugary soft drinks, cutting down on desserts and generally consuming less sugar and saturated fat.

Although DHA appears to be quite beneficial, Yang said it is not a magic bullet for curing diseases. Additional research will be needed to determine the extent of its ability to reverse damage to human genes.

The paper’s lead author is Qingying Meng, a postdoctoral scholar in Yang’s laboratory. Other co-authors are Zhe Ying, a staff research associate in Gomez-Pinilla’s laboratory, and colleagues from UCLA, the National Institutes of Health and Icahn School of Medicine at Mount Sinai in New York.