Southern California cougars often make the news with their litters of oh-so-cute kittens, but a UCLA-led study suggests that these mountain lions may soon find it much harder to reproduce due to a lack of genetic diversity.

Scientists tracking two local mountain lion populations, one in the Santa Monica Mountains and another in the Santa Anas, have identified the first reproductive signs of inbreeding among these groups, which are cut off from other cougar populations — and therefore breeding options — by busy freeways.

The animals averaged a whopping 93% abnormal sperm rate, while some also displayed physical signs of inbreeding, like deformed tails or testicular defects. Researchers have long had genetic evidence of inbreeding, but the malformed sperm is the first evidence that inbreeding is manifesting in the reproductive system.

“This is a serious problem for an animal that’s already endangered locally,” said the study’s lead author, Audra Huffmeyer, a UCLA postdoctoral researcher who studies fertility in large cat species and is a National Geographic Explorer. “It’s quite severe.”

The study, currently available online and scheduled for publication in the January 2022 print edition of the journal Theriogenology, lends added urgency to the need for wildlife crossings, structures that would allow the mountain lions and other animals to roam further and find a broader pool of potential mates, the researchers said. Mountain lions, also known as cougars, are a bellwether species, making them a leading indicator that inbreeding could soon cause problems for other wildlife species in the Santa Monica and Santa Ana mountains, the researchers explained.

Tracking the signs of inbreeding

Over the past year, the research team identified nine adult males from the Santa Monica and Santa Ana ranges with signs of inbreeding, including the first evidence of reduced fertility. The scientists took sperm samples from five cougars that died from unrelated causes, such as rat poison or car collisions. (Though researchers would like to get those samples from live mountain lions, it’s unsurprisingly a complicated proposition.) They found that each had very high levels of abnormal sperm, together averaging an exceedingly high 93% abnormal sperm rate. One of the five also had testes of dramatically different sizes.

The researchers also found other telltale physical manifestations of inbreeding among living cougars: four had kinks in their tails, including one that also had only one descended testicle. Both mountain ranges included at least one mountain lion with a malformed tail and one with abnormal sperm.

National Park Service
The kinked tail of P-81, a physical manifestation of inbreeding. This same male mountain lion was found to have an undescended testicle, a condition known as cryptorchidism.

These findings are similar to the signs of severe inbreeding seen early on among most Florida panthers in the 1990s — including the kinked tails, undescended testes and teratospermia (60% or more abnormal sperm), Huffmeyer noted. The Florida panther population only recovered with the introduction of mountain lions from Texas.

“The Florida panthers were also severely isolated and severely inbred, so the fact that we’re seeing the same traits in our mountain lion population is alarming,” she said. “If we don’t do anything to introduce more genetic diversity to the Southern California mountain lions, we will have more males with reproductive problems, fewer kittens and a lower rate of kitten survival.”

Ultimately, there’s a real risk of extinction for the mountain lions in the Santa Monica and Santa Ana ranges. Although they haven’t seen evidence yet, once scientists start finding significant inbreeding depression — meaning decreased fertility and reduced kitten survival — extinction is predicted to occur within 50 years, with a median extinction time of 12 to 15 years, according to 2016 and 2019 papers evaluating population viability that included scientists from UCLA, NPS, UC Davis, the University of Wyoming, and the University of Nebraska.

“That’s why these recent findings of physical manifestations of inbreeding are so significant,” said Seth Riley, the wildlife branch chief at Santa Monica Mountains National Recreation Area and a researcher and adjunct associate professor at UCLA. “We are not yet seeing the declines in survival, reproduction and physical condition that they saw in Florida, but seeing these signs of it is a major concern and potential harbinger of further, more serious issues. We have not yet seen a noticeable decline in litters of kittens, but it may be a bit early.”

While a few mountain lions — in particular the cougar known as P-22, who frequents Griffith Park — have successfully crossed freeways, far more have been killed trying to do so. For years, conservationists have lobbied for the construction of wildlife crossings that will help populations of cougars and other animals penned in by roadways connect with populations they’ve been largely isolated from for generations, Riley said. 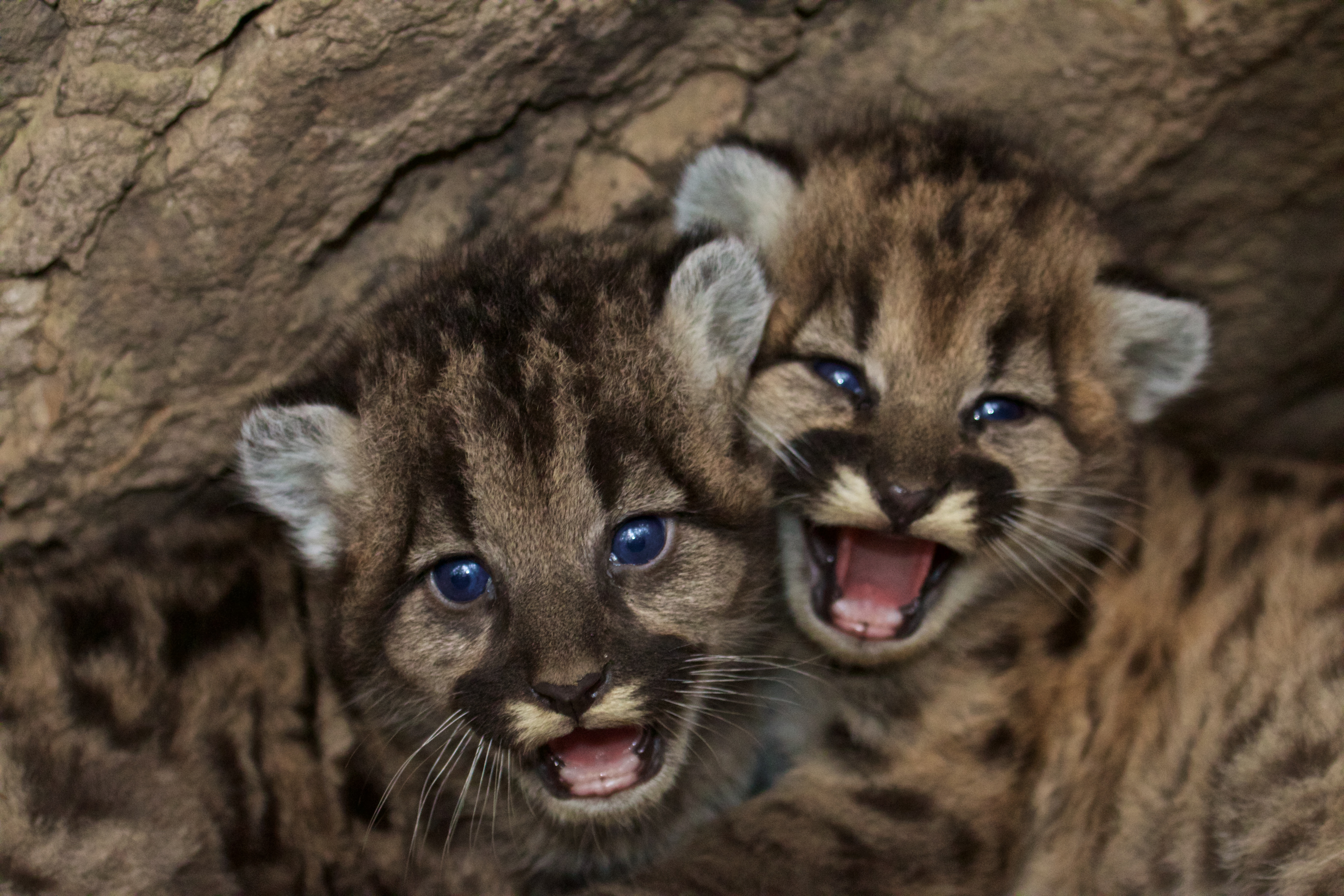 The California Department of Transportation has scheduled groundbreaking for early 2022 on one such crossing, a wildlife bridge over Highway 101 in Agoura Hills in northwestern Los Angeles County, thanks to a mix of public and private funding. Biologists and land managers hope this project will lead to more crossings. In fact, early plans are being formulated for a possible structure over Interstate 15 in in Riverside County.

Crossings, the researchers say, help all local animal species amp up their genetic mix and, when feasible, are preferable to the Florida scheme of transporting mountain lions into circumscribed local habitats, which is not a long-term solution and can often result in mortality for translocated animals.

For now, the researchers will continue monitoring how the newly discovered fertility issues affect the mountain lions’ breeding, keeping a close eye on potential decreases in the number of kitten litters and kitten survival rates.

“If we don’t do anything to add genetic diversity, the end is near,” Huffmeyer stressed. “That sounds dramatic, but that’s what we’ve seen.”