A team of researchers from UCLA, Cedars-Sinai and the Cystic Fibrosis Foundation has developed a first-of-its-kind molecular catalog of cells in healthy lungs and the lungs of people with cystic fibrosis.

The catalog, described today in the journal Nature Medicine, reveals new subtypes of cells and illustrates how the disease changes the cellular makeup of the airways. The findings could help scientists in their search for specific cell types that represent prime targets for genetic and cell therapies for cystic fibrosis.

“This new research has provided us with valuable insights into the cellular makeup of both healthy and diseased airways,” said Dr. Brigitte Gomperts, a co-senior author of the study and a member of the Eli and Edythe Broad Center of Regenerative Medicine and Stem Cell Research at UCLA. “If you can understand how things work in a state of health, it becomes easier to see what cellular and molecular changes occur in a disease state.”

A progressive genetic disorder that affects more than 70,000 people worldwide, cystic fibrosis results from mutations to the CFTR gene. Cells that contain the defective protein encoded by the gene produce unusually thick and sticky mucus that builds up in the lungs and other organs. This mucus clogs the airways, trapping germs and bacteria that can cause life-threatening infections and irreversible lung damage.

While several new therapies can partially restore the function of these damaged proteins, easing symptoms of the disease, slowing its progression and improving quality of life, these treatments only work in people with some of the many CFTR mutations that can cause cystic fibrosis.

“We have made tremendous progress in the development of treatments for the underlying cause of cystic fibrosis, but many people cannot benefit from these medicines,” said John (Jed) Mahoney, a senior co-author of the paper and head of the stem cell biology team at the Cystic Fibrosis Foundation Therapeutics Lab. “This research provides critical insight into how the disease alters the cellular makeup of the airways, which will enable scientists to better target the next generation of transformative therapies for all people with cystic fibrosis.”

The research team was assembled through the Cystic Fibrosis Foundation’s Epithelial Stem Cell Consortium, which brings together scientists from across the U.S. in an ongoing effort to identify different subtypes of stem cells in the lungs and study their function. Because these cells can self-renew and produce a continuous supply of specialized cells that maintain, repair and regenerate the airways, therapies aimed at correcting CFTR mutations in stem cells hold the best hope for a one-time, universal treatment for the disease.

“This catalog represents an important step toward identifying those rare stem cells that regenerate the airways over a person’s lifetime,” said Gomperts, who is also a professor of pediatrics and pulmonary medicine at the David Geffen School of Medicine at UCLA. “We suspect these cells could be targets for future therapies that may provide a long-term correction to the mutation that causes this disease.”

‘Un-blending’ a smoothie: How the catalog was created 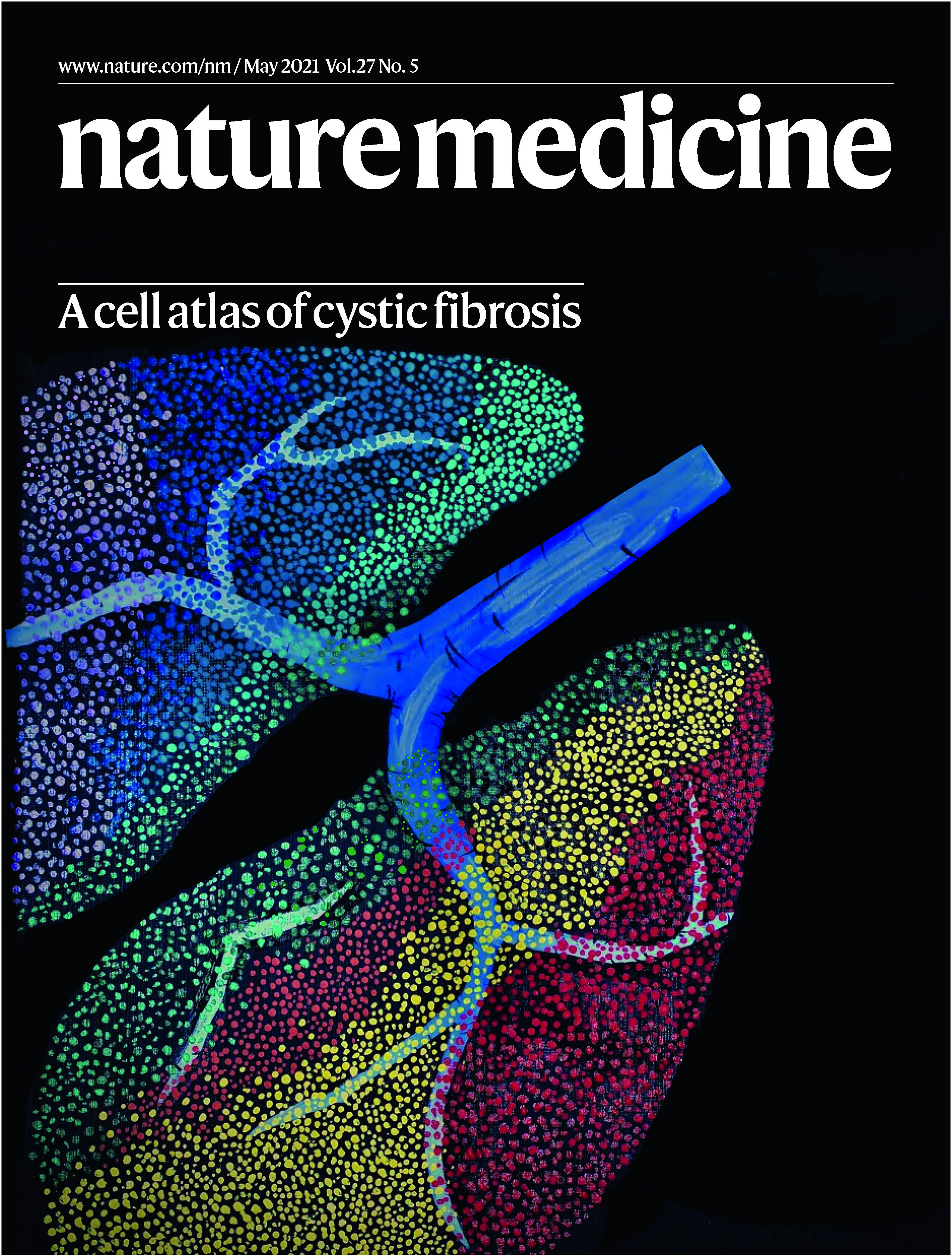 Nature Medicine
Cover art by Matthew Gangl illustrates how single-cell RNA sequencing shines a light on the variety of cell subtypes in the airways and how cystic fibrosis changes this landscape.

For the study, Gomperts, Mahoney and their co–senior authors,  Barry Stripp of Cedars-Sinai and Kathrin Plath of UCLA, compared tissue samples taken from lungs removed from 19 people with cystic fibrosis, all of whom had received lung transplants, with samples taken from healthy lungs donated by 19 individuals who had died from other causes.

Researchers at the three institutions employed similar but distinct methods to break these tissues down and examine them using a technology called single-cell RNA sequencing, which allowed them to analyze thousands of cells in tandem and classify them into subtypes based on their gene expression patterns — this is, which genes are turned on and off.

“The process is analogous to taking a smoothie and ‘un-blending’ it to discover all the ingredients it contains and measure how much of each ingredient was used,” said Plath, a professor of biological chemistry and a member of the UCLA Broad Stem Cell Research Center.

Using a novel computer-based bioinformatics approach to compare the gene expressions patterns of the various cells, the team was able to create a catalog of the cell types and subtypes present in healthy airways and those affected by cystic fibrosis, including some previously unknown subtypes that illuminate how the disease alters the cellular landscape of the airways.

“We were surprised to find that the airways of people with cystic fibrosis showed differences in the types and proportions of basal cells, a cell category that includes stem cells responsible for repairing and regenerating upper airway tissue, compared with airways of people without this disease,” said Stripp, a professor of medicine and director of the lung stem cell program at the Cedars-Sinai Board of Governors Regenerative Medicine Institute.

Specifically, the researchers discovered that among the basal cell populations, there was a relative overabundance of cells that appear to be transitioning from basal stem cells into specialized ciliated cells, which use their finger-like projections to clear mucus out of the lungs.

“We suspect that changes the basal cells undergo to replenish ciliated cells represent an unsuccessful attempt to clear mucus that typically accumulates in airways of patients with cystic fibrosis,” Stripp said.

The increase in transitioning cells provides further evidence suggesting that expression of the mutated CFTR gene disrupts normal function of the airways, leading to changes in the way that basal stem cells produce specialized cells.

Moving forward, the researchers will continue to study the new data for insights into how cystic fibrosis alters the cellular landscape of the airways — including why this unsuccessful transition occurs— and to identify the long-lived basal stem cells that would be the ideal target for a CFTR gene correction.

The co–first authors of the study were Gianni Carraro from Cedars-Sinai and Justin Langerman from UCLA.