Neil Garg, professor and vice chair for education in UCLA’s department of chemistry and biochemistry, has been selected as the 2015 Carnegie Foundation for the Advancement of Teaching California Professor of the Year. He is being honored today at the U.S. Professors of the Year awards banquet and congressional reception in Washington, D.C.

The U.S. Professors of the Year program honors the nation’s most outstanding undergraduate instructors for their extraordinary teaching and positively influencing the lives and careers of their students. It is judged by leading educators and administered by the Council for Advancement and Support of Education.

In his teaching, Garg emphasizes the creativity and problem-solving that organic chemistry requires and its relevance in students’ lives.

Garg is known for creating interactive online tutorials that combine real-life examples of organic chemistry, human health and popular culture. He now hopes to make the tutorials available to students and educators worldwide.

His students particularly enjoy an extra credit project in which they produce music videos about organic chemistry. In spring quarter alone, more than 300 of his students teamed up to create 98 new music videos, including clever chemistry versions of the songs “I Will Survive” and “Riptide.”

“I feel like Sherlock Holmes when solving retrosynthesis problems,” said Christine Nguyen, one of Garg’s students.

Another student, Aaron Lalehzarian, said his friends had warned him how difficult organic chemistry was. But with Garg’s teaching, Lalehzarian said, “It’s not impossible. It’s not even that hard. It’s logical.” 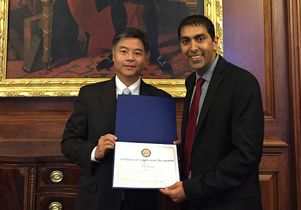 Garg has won a number of honors for his teaching and research, including the 2015 Gold Shield Faculty Prize, the 2014 Eby Award for the Art of Teaching and the 2012-2013 BruinWalk.com Professor of the Year.

His research group develops new chemical transformations that enable the synthesis of important organic molecules, such as pharmaceuticals and bioactive molecules found in nature that are often referred to as “natural products.”

Garg and his family live in a campus residence hall as part of UCLA’s faculty-in-residence program, which allows professors to interact with students at mealtimes, while on trips and in other daily interactions outside the classroom.

“Neil is the most passionate person about what he does I’ve ever met,” said Kian Samadian, a second-year undergraduate who took Garg’s class in the spring quarter. “He’s easily the best professor I’ve ever had, and the best I probably ever will have.”

► Garg shares his teaching techniques in a TEDxUCLA talk