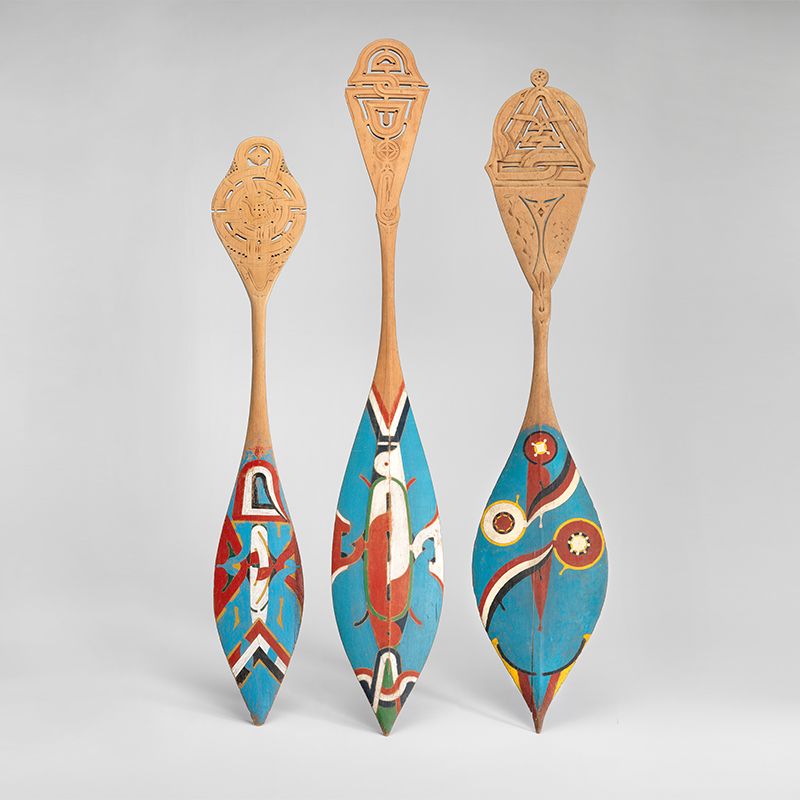 Maroons hold a special place in the history of Africans and their descendants in the Americas. From the mid-1600s, their enslaved ancestors escaped the coastal plantations of the Dutch colony of Suriname and established free communities deep in the interior where the riverine and forested landscape provided both mobility and security.

Maroon peoples have long been renowned for tembe, traditional art forms including domestic architecture, vibrant textiles and intricately carved household objects. The works included in this exhibition are drawn from the Fowler Museum’s permanent collection and date from the last century. They exemplify ways in which sculptors and textile artists utilize color and geometric pattern to transform items meant for daily use into works of art infused with personal and communal meaning.

Today, while Maroon is the most widely employed ethnonym, some prefer to describe themselves as Fiiman, meaning “Freemen” or “Free People.” Both terms evoke a legacy of resistance and self-determination that remains critically relevant; we use them interchangeably in this exhibition.

Since Suriname’s independence from the Netherlands on Nov. 25, 1975, Maroon populations have faced major economic, political, and social challenges that have significantly affected many aspects of their way of life, including artistic practices. Nonetheless, tembe remains an important element of being Fiiman.

The exhibition, “Fiiman Tembe: Maroon Arts from Suriname,” opens with an array of objects carved in wood, studded with tin or metal nails, or painted in the colors of Suriname and the Netherlands. These embellishments derive from African, European, and indigenous Amerindian artistic traditions — often seamlessly — as reflected in three meticulously carved canoe paddles on view. Perhaps the most widely recognized genre of Fiiman tembe, canoe paddles are representative of personal independence and mobility, and are prized possessions as well as symbols of leadership.

A suite of decorative architectural elements exemplifies the traditional Maroon-style house (osú), a defining characteristic of Fiiman communities. When seen from a distance, the small, windowless A-frame structures — built primarily of wood planks or woven palm fronds and topped with thatched or galvanized tin roofs — appear simple in design and decoration. Viewed up close, their gabled facades reveal vivid geometric designs — diamonds, checkerboards, circles and stars — as well as elaborate lacelike woodwork. The houses are not only testaments to the skill of their builders but also markers of the ethnic and social identities of those who reside within them.

A collection of dazzlingly tinted and patterned clothing (koosi) illustrates how Maroon peoples express uniqueness within families, villages and larger social worlds. While they have always incorporated European-style attire in selective ways, Fiiman maintain their own traditional modes of dress.

A case of painstakingly carved wooden objects closes the installation with a focus on domestic life and the transformative attention lavished on tools for everyday use: a brass-studded board for grinding nuts, and sturdy laundry beaters and weaving tools incised with interlocking patterns. A delicate calabash bowl has become an increasingly popular acquisition among tourists to Suriname (as have decorative canoe panels), and represents a new source of income for Maroon artists and their communities.

“Fiiman Tembe: Maroon Arts from Suriname” is curated by Jeremy Jacob Peretz, doctoral candidate in the UCLA Department of World Arts and Cultures/Dance, and Patrick Polk, curator of Latin American and Caribbean popular arts at the Fowler Museum at UCLA.

The Fowler Museum at UCLA explores global arts and cultures with an emphasis on works from Africa, Asia, the Pacific, and the Americas — past and present. The Fowler enhances understanding of world cultures through dynamic exhibitions, publications, and public programs, informed by interdisciplinary approaches and the perspectives of the cultures represented. Also featured is the work of international contemporary artists, presented within the complex frameworks of politics, culture, and social action.