​​Following a $5 million donation he made in 2017, UCLA alumnus and longtime supporter Morton La Kretz has given an additional $15 million to fund the ongoing renovation of the campus’s Botany Building.

In recognition of the $20 million he has given for the project, UCLA has renamed the building the La Kretz Botany Building.

The renovation, which is already underway, includes a refurbished entrance and lobby accessed from Charles E. Young Drive; upgraded labs for teaching and research on botany and conservation; and a new technologically enabled class lab with an entrance on the south side of the building accessible to the garden. The project is expected to be completed in January 2022.

“We are tremendously grateful to Morton La Kretz,” said Victoria Sork, UCLA’s dean of life sciences. “His philanthropy has had a monumental impact on research and education on environmental and plant conservation studies at UCLA, and his latest gift to revitalize the botany building is yet another shining example.” 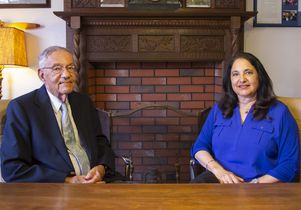 La Kretz is the founder and president of Crossroads Management, a real estate development and property management company. Among his notable achievements is saving Hollywood’s historic landmark Crossroads of the World from demolition in 1977 and restoring it to its former 1930s glory.

La Kretz grew up in the Boyle Heights neighborhood of Los Angeles during the Depression and was one of the few students from his high school to attend college. By the time he enrolled at UCLA, the U.S. had entered World War II and he interrupted his education to enlist in the Navy as an electronics technician. The war ended before he saw any action, and he returned to UCLA to earn a bachelor’s degree in psychology in 1948.

For all his success in business, La Kretz said he is most proud of his philanthropy and its impact.

“It is so satisfying to give young people an education that will enable them to focus on the pressing environmental and conservation issues of our time,” he said.

He said his latest gifts aligned well with his philanthropy to UCLA over the past 16 years. His previous major gifts include lead gifts toward the construction of La Kretz Hall, which houses UCLA’s Institute of the Environment and Sustainability; to create the La Kretz Center for California Conservation Science, located in the Santa Monica Mountains and administered through the IoES in partnership with the National Park Service; to build an entrance to the Mildred E. Mathias Botanical Garden, and to construct the La Kretz Garden Pavilion, which hosts events and classes and  serves as a visitor center at the garden’s north end.

La Kretz is 92, but he has no plans to retire, and he has passed on his passion for philanthropy to his daughter, Linda Duttenhaver, vice president of Crossroads Management. Duttenhaver shares his interest in supporting higher education and the environment: In 2017, she and her father established the La Kretz Research Center at Sedgwick Reserve, operated by UC Santa Barbara as part of the University of California Natural Reserve System.

La Kretz’s recent gifts are part of the UCLA Centennial Campaign, which is scheduled to conclude in December 2019 during UCLA’s 100th anniversary year.