UCLA announced today that it is naming a series of recreation and athletics facilities in honor of Jackie Robinson, the legendary four-sport Bruin star who went on to break the color barrier in Major League Baseball and earn a place in the Hall of Fame.

“Jackie Robinson’s name and his legacy are an honor to this university, and to all the students and student-athletes who will continue to be inspired by his courage, dignity and grace,” said UCLA Chancellor Gene Block. “Jackie detested injustice, fought for civil rights and his spirit of breaking barriers has been and always will be a guiding force of UCLA past, present and future.” 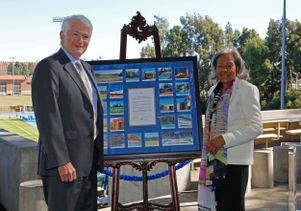 The naming ceremony included remarks from Chancellor Block, UCLA Athletic Director Dan Guerrero and Vice Chancellor Janina Montero. To a crowd of distinguished guests, Rachel Robinson, the wife of Jackie Robinson and a UCLA Medal recipient, recalled both her husband’s legacy and their time together at UCLA. The ceremony, which culminated in a celebratory naming and photo opportunity to commemorate the occasion, is the first of two special events celebrating the legacy of Jackie Robinson on the 75th anniversary of his arrival at UCLA.

“Jackie Robinson was one of the great athletes of the 20th Century,” said Guerrero. “Yet for all of Jackie’s athletic achievements, it is his humanity that sets him apart from the others. As UCLA Athletic Director, I expect our student-athletes to represent the university with class, character and dignity under any and all circumstances — in short, I expect them to meet the standard set forth by Jackie Robinson.”

Chief among campus’ recognition of the complex will be an in-ground number 42 at each entry point to UCLA’s training centers, competition sites, fields and stadiums as a reminder of Robinson’s tremendous courage in the face of adversity.

“The name Jackie Robinson is synonymous with excellence and sports equity," said Mick Deluca, Assistant Vice Chancellor of Campus Life. “It is a tremendous honor and testament to inclusion knowing that going forward, UCLA students, faculty, staff, and athletes of various backgrounds, interests and abilities will have the opportunity to participate in an athletics and recreation complex that now bears his name.”

On Saturday, November 22, during the first quarter break of the UCLA-USC football game at the Rose Bowl, Jackie Robinson’s legacy will be honored through a special in-stadium video. Additionally, to celebrate the naming of Jackie Robinson Athletics and Recreation Complex, Robinson’s iconic number 42 will be painted onto the Rose Bowl field at the 25-yard line and worn on the helmets of each UCLA football player.

Seventy-five years ago, Jackie Robinson claimed a place at UCLA. From 1939 to 1941, he starred in four sports. In football, Robinson played both offense and defense, returned punts, caught and threw passes, kicked extra points and in the process, earned honorable mention All-American accolades. In basketball, he twice led the Pacific Coast Conference in scoring. In track, he won the NCAA championship in the broad jump. And in baseball, he began his legendary journey as a highly-regarded shortstop for the Bruins.

Six years later, Jackie Robinson claimed a place in history. Wearing number 42 for the Brooklyn Dodgers, on April 15, 1947, Robinson shattered the color barrier in Major League Baseball forever. Despite enduring racial abuse, jeers of fans and fellow players, death threats and profound harassment, he endured it all with grace and dignity - not to mention exceptional play - earning Rookie of the Year honors and a National League Most Valuable Player award in addition to helping the Dodgers win the 1955 World Series. A career .311 hitter, Robinson played in six World Series, six consecutive All-Star games was inducted into the Baseball Hall of Fame in 1962 during his first year of eligibility.

Fighting tirelessly for civil rights and integration in professional sports long after his time on the diamond was over, Robinson perhaps best summed up his own legacy with a typically understated yet poignant quote – “A life is not important except in the impact it has on other lives.” Video 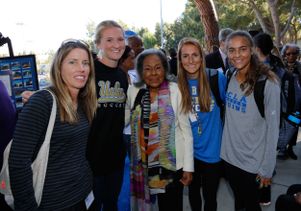