Cheers filled UCLA’s Pauley Pavilion on Friday as seniors in the Class of 2015 graduated. More than 5,500 graduates — decked out in academic regalia modified by glittery words on mortarboards, fragrant leis, novelty sunglasses and more — celebrated the completion of their degrees in person at two ceremonies hosted by the UCLA College, the university’s primary undergraduate unit. The split celebrations, at 2 p.m. and 7 p.m., each packed the famed arena to near-capacity.

Of the graduates receiving their diplomas, about a third became the first in their family to receive a four-year college degree. More than half of graduates received some form of financial assistance. The academic performance of the class of 2015 made them the highest-achieving group of students ever to graduate UCLA. 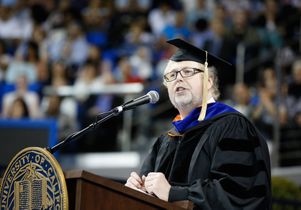 “I still can’t believe I’m already graduating,” said Mia Park, a biology major from New Zealand, as she walked to line up for the processional. “It went so fast.”

Students gathered for group photos before the ceremony or held phones to their ears as they directed parents to campus. Others met with their families, and at least one mother was spotted reaching up tenderly to adjust her daughter’s cap.

“I just got out of my last final an hour ago,” said Kate Bassett, a European Studies major with a slightly shell-shocked look on her face. “I don’t think it will hit me that I’m really graduating until it’s over.”

In Pauley, students heard from keynote speaker and UCLA alumnus Nathan Myhrvold, who retired as chief strategist of Microsoft to found the now $6-billion company Intellectual Ventures. He insisted to the graduates that he would never have succeeded if he had been afraid of making mistakes.

“Success in life is not absence of failures,” said Myhrvold, an inventor, entrepreneur, and author. “The road to success is paved with failures. If you freak out about them, you’re not going to get anything done.”

Myhrvold, who earned his bachelor’s and master’s degrees from UCLA in 1979 at the age of 20, decried fear of failure and the expression “failure is not an option.”

As he congratulated the graduates, UCLA Chancellor Gene Block noted the aptness of UCLA’s motto, Fiat Lux, or “Let There Be Light,” in describing this year’s class. Members had brightened the lives of others by creating charities, starting support groups, volunteering countless hours and more.

“The degree you receive today is certainly a symbol of academic achievement, but — and this is an important but — it also summons you to responsibility and action,” Block said. “What’s most impressive is you don’t have to be encouraged to use what you’ve learned at UCLA to transform our community and the world for the better. That’s because you are already doing it. You’ve already made an impact.”

The student speaker for the first ceremony, Angelo Antonio Jr., reminded his classmates why they came to UCLA.

“We might have been drawn here by its reputation as the most-applied-to school in the nation, with the most NCAA titles of any university, and a perennial place on top ranking lists around the globe, yet we will undoubtedly continue with legacies of our own.”

Antonio, who experienced UCLA as a commuter student, found a metaphor for his college years in the lengthy period of construction on the neighboring Interstate 405 freeway and the recently completed Wilshire Boulevard on-ramp, which “resembles a stretched-out finish line,” he said.

The students shifted the tassels on their caps from right to left, marking the moment of official graduation. Cheers from the crowd reverberated inside Pauley Pavilion as they first did 50 years ago, when the class of 1965 became the first Bruins to graduate inside the arena at an event that also celebrated Pauley’s opening.

The College ceremonies are among more than 50 graduations, receptions and celebrations taking place the last weeks of the school year, together awarding more than 7,700 bachelor’s degrees and 4,300 graduate degrees for the academic year.