“What is freedom?” asked Brett Steele, dean of the UCLA School of the Arts and Architecture.

Nearly 200 undergraduates and members of the public were packed into the audience for UCLA’s “10 Questions” course, which debuted in fall quarter. Responding to Steele’s query were four UCLA faculty members: Seana Shiffrin, professor of philosophy and law; Andrea Fraser, professor of art; Lauren McCarthy, professor of design media arts; and Ananya Roy, professor of urban planning.

Gathering professors from disparate disciplines to weigh in on complex societal topics was the structure of the new course, which draws its name from the discussion of one “big question” each week of the quarter. Its chief objective is enabling students to experience the almost alchemic conversations that can drive innovation at UCLA.

Throughout the quarter, 40 professors from 33 disciplines considered questions such as, What is space? What is failure? And, what is a body? But on the day panelists considered the meaning of freedom, their insights offered a snapshot of how different academic approaches can lend new meaning to any of those topics.

► Watch videos from all the “10 Questions” sessions.

For example, Shiffrin pointed to the legally protected right to refuse to say the Pledge of Allegiance. “Compelled recitations deprive recitations of much meaning; they become coerced and empty rituals, not true affirmations,” she said. “But by contrast, the freedom not to speak not only serves the integrity of the thought of the person who chooses not to speak; it also renders the speech of those who continue to participate more meaningful.”

Fraser discussed the paradox in the “freedom” enjoyed by artists in today’s world. “How many artists joined the Occupy movement to protest increasing economic inequality and wealth concentration,” she asked, “while they continued to participate in an art market sustained almost exclusively by the 0.1 percent?”

To McCarthy, one meaning of “freedom” was the feeling she got thanks to a smartphone app she designed that gave strangers the power to tell her what to do on a date. “One of the most surprising things I found when I did this was that once I gave into the system of hyper-control, I actually found some freedom,” she said. “I found this freedom from me.”

And for Roy, whose scholarship is focused on advancing social justice, freedom is the unfulfilled promise of cities — unfulfilled, she said, because of histories of institutional racism. To help illustrate her point, she cited a lyric by hip-hop artist J. Cole.

“He says, ‘One thing about the men, that’s controlling the pen, that write history, they always seem to white out their sins,’” Roy said. “The dream of freedom means changing who controls the pen.” 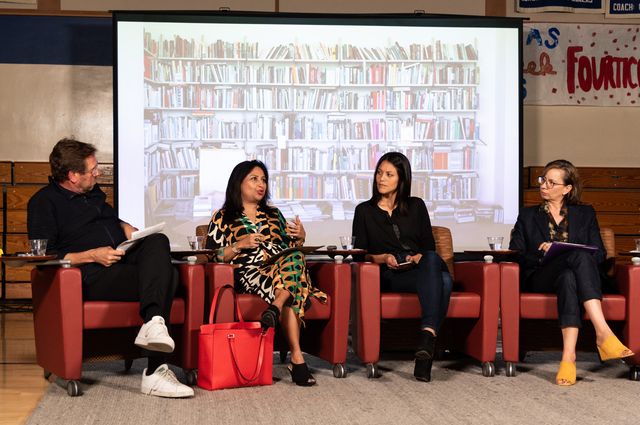 The course was developed by Victoria Marks, associate dean of the UCLA School of the Arts and Architecture, and Anne Marie Burke, the school’s executive director of communications and public relations.

“The response was overwhelming,” Marks said. “It is clear that we hit a nerve and that there is a hunger for this type of conversation, this level of engagement, not only within the academic community here at UCLA, but across the city. Most fundamentally, I learned far more tangibly than I had before that the university is an unbounded gathering point for extraordinary intellectual, creative and scientific accomplishment.”

One of the other classes considered the question, What is time? In introducing the session, Steele said, “This combination of class and public event gives us an opportunity to build bridges. To build bridges rather than reinforce walls between the university and the public whom we serve. We are striving here to make state-of-the-art education not only more visible, but literally more available in the world around us.”

Among the course’s many inspiring moments, Bryonn Bain, professor of world arts and cultures/dance and African-American studies, led the audience in a call and response that he had written for the class discussing “What is a university?”

Bain: In a land where they plan the worst for me
Made my whole damn family work for free
Hang your ol’ man under an old oak tree
Police gun us down in the first degree

Audience: We are, and so I am.

Endowing anybody who even looks like me
With an unwanted superpower: invisibility
Justice ain’t so blind in the penitentiary
Dropping rocks on the scales daily

During “What is space?” the audience went from considering the vastness of the cosmos with astrophysicist Andrea Ghez to pondering the most minuscule of particles with Paul Weiss, director of the California NanoSystems Institute at UCLA, to weighing an altogether different interpretation of the term with Rodrigo Valenzuela, assistant professor of photography.

Valenzuela said that art gallery and museum exhibitions often provide space for a single artist of color, but seeing multiple artists of color in the same show is still rare in the United States. “It’s like how rooms can become oppressively small even if they are really large in size.” 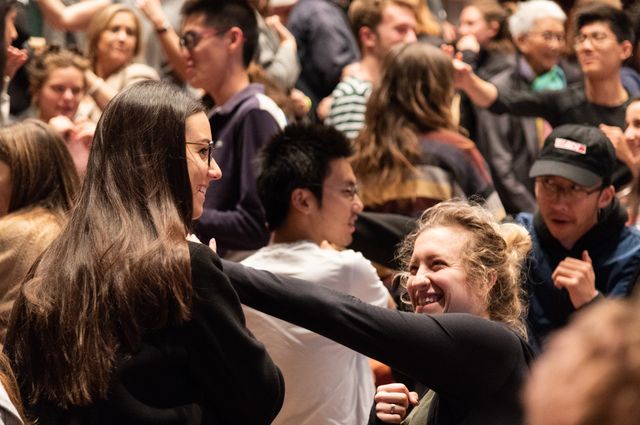 Kylie Carrigan/UCLA
During “What is Failure?” Jay O’Shea, professor of dance, had the audience members learn how to dodge a punch.

► Watch Jay O’Shea explain her idea of failure by sparring with David Gere, professor of world arts and cultures.

Those types of moments kept fourth-year psychology major Aya McGlothlin coming back week after week — even though she wasn’t enrolled in the class.

“Before, you might have a singular, obvious answer to the question,” she said. “But to each speaker it’s a completely different perspective, and after the talk is over you realize that you’ve broadened your own horizons through the discussion,”

McGlothlin said she has hosted friends to watch sessions she wasn’t able to attend in person.

Based in part on feedback from students, like McGlothlin, and the faculty speakers, such as Jerry Kang, vice chancellor for equity, diversity and inclusion, who participated in “What is a university?,” UCLA plans to bring the course back this fall, when some of the new questions will include: What is justice? What is truth? What is citizenship?

“The unscripted discussion among scholars, students and the community,” said Kang, UCLA’s Korea Times–Hankook Ilbo Professor of Korean American Studies and Law, “revealed what’s so extraordinary about our university.”