By this time of summer, most incoming UCLA freshmen and transfer students have taken their orientation tours. (Sessions began on July 6 and end on Sept. 11.) They have been introduced to UCLA’s well-known landmarks by fast-talking, backward-walking, pun-making student tour guides. But there are lesser-known places all Bruins should also visit. Here is UCLA Newsroom’s unofficial, alternative campus tour. 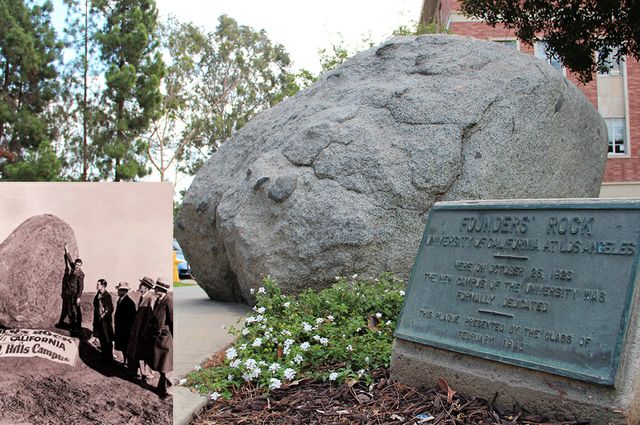 Legend has that in 1926, students ordered a 75-ton granite boulder hauled to Westwood but never paid the trucking company’s bill. In reality, the university did pay to have Founder’s Rock hauled 85 miles over 10 days to mark the spot where the new campus was planned. The boulder has been moved twice and sits near some parked cars at the northeast corner of Murphy Hall. 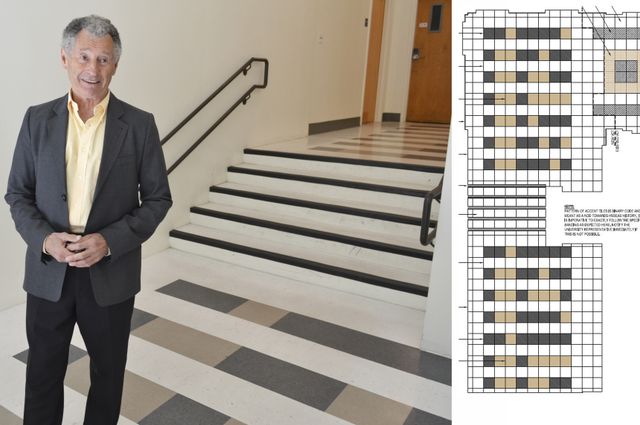 On the second floor of Boelter Hall, home of the UCLA Henry Samueli School of Engineering and Applied Science, there’s a seemingly random arrangement of dark and light gray floor tiles outside room 2714. The tiles actually spell out “Lo and behold” in binary code. The hidden message was secretly added to a renovation project in 2011 as a clever (and subtle) way to honor Internet pioneer and professor Leonard Kleinrock. He and his team sent the first-ever message over ARPANET, the original Internet, in 1969: “LO.” They were actually trying to send “LOGIN” when the system crashed.

3. Fish on a flagpole 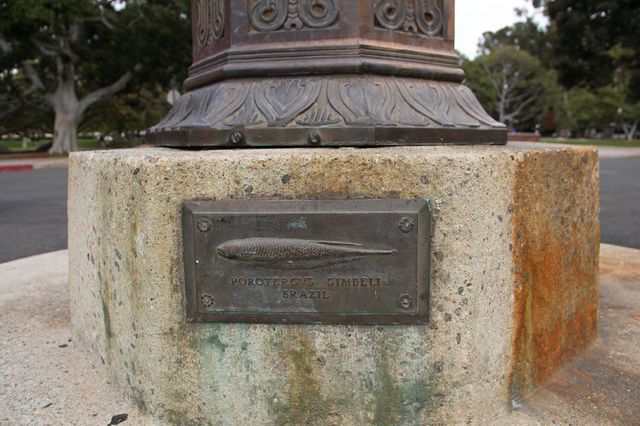 Facing the quadrangle where UCLA’s four original buildings stand, the flagpole at Portola Plaza and Dickson Court was a gift in 1937 by Jacob Gimbel, a Los Angeles philanthropist. Notice the fish depicted on a small brass plaque.  In 1910, Gimbel financed a Carnegie Museum research expedition to South America that discovered a fish that shocked its prey with an electric current, according to local legend.

4. Pillar in the Anderson School community 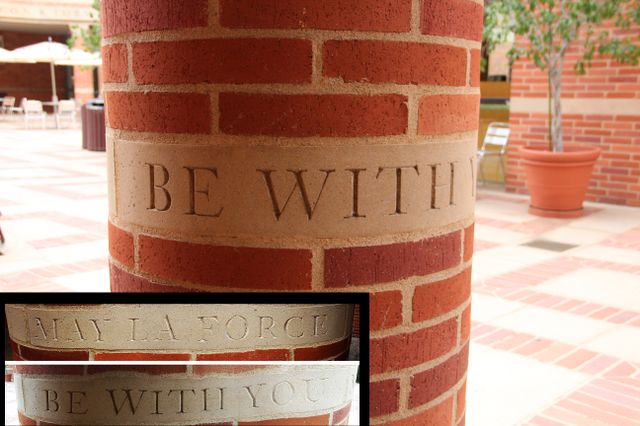 J. Clayburn La Force, who received his master’s and Ph.D. degrees from UCLA, was the Anderson dean who spearheaded the construction of the school’s contemporary building complex. To honor him, one of the exterior red brick pillars in the Anderson courtyard carries the inscription, “May La Force Be With You.” 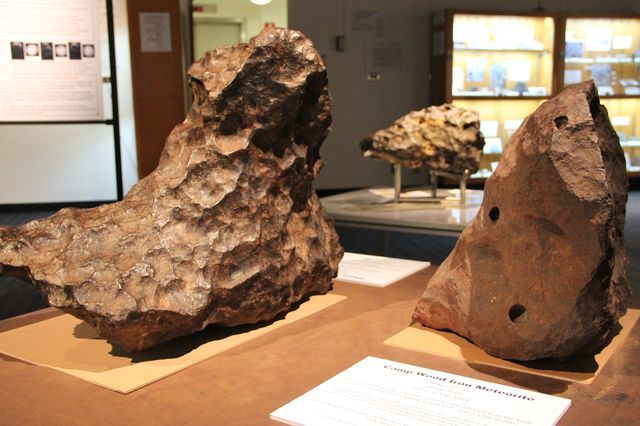 Among the campus’ little-known treasures is the largest collection of meteorites in California (and fifth-largest in the nation.) Assembled for years by cosmochemist John Wasson, researcher Alan Rubin and their colleagues, more than 1,500 space rocks rest in the UCLA Geology Building. About 100 of them are on display at the UCLA Meteorite Gallery, 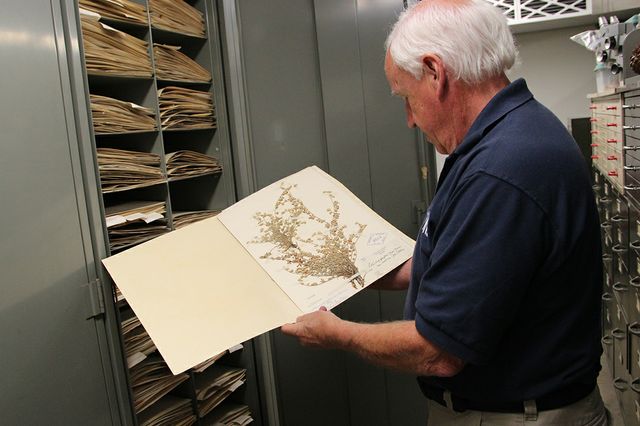 Tucked away in the Botany Building is the UCLA Herbarium — three floors filled with metal file cabinets that hold 200,000 sheets of dried and pressed plants gathered from around the world. The oldest of the plants is 150 years old. It is the fifth largest herbarium in the state, and the botanists who work here are still discovering plants they didn’t know they had.

7. Birthplace of a literary classic 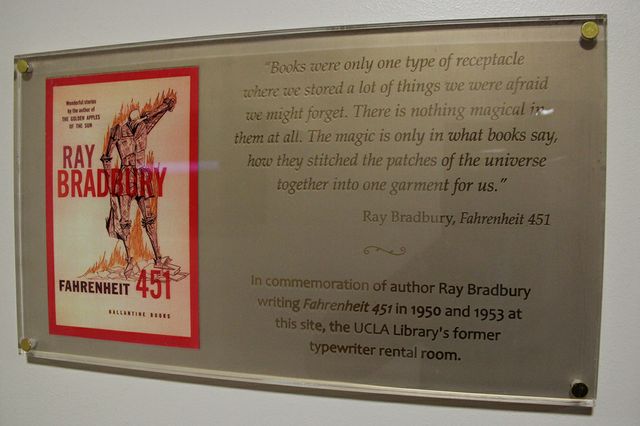 If you can find room 60 in the section of the basement of Powell Library Building housing the Office of Instructional Development, you’ll see a sign that commemorates the room where “Fahrenheit 451” took shape. In 1950 and 1953, author Ray Bradbury came supplied with a bag of dimes for the rental typewriters. He clacked out “The Fireman” in nine days (total cost $9.80) and returned to rework his story into “Fahrenheit 451.” You can still find a copy of his original work in UCLA Library Special Collections, which houses a rich treasure trove of Bradburyana. 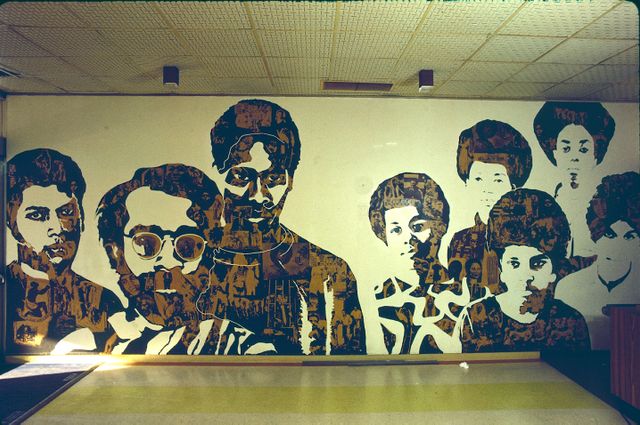 After being hidden behind a false wall in Ackerman Union for 20 years, a 10-foot-by 27-foot mural painted by black art students 45 years ago came back into public view again in 2014. It depicts the struggles and achievements of African Americans — the faces are those of the painters. You can see it next to the Panda Express.

9. Bridging UCLA’s past and present 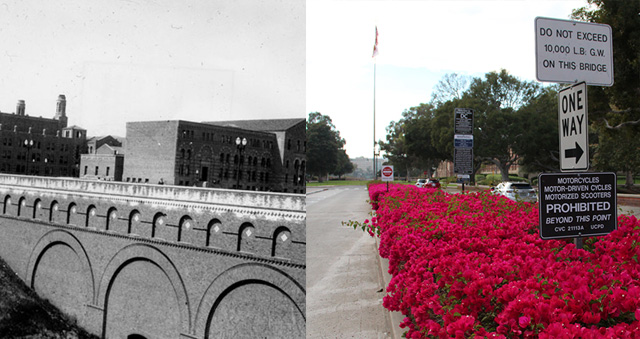 If you are walking along Dickson Court, you’ll see a vehicle warning sign in the median that may puzzle you: “Do not exceed 10,000 L.B. G.W. on this bridge.” What bridge? Hidden under the roadway is the first structure ever built on campus. The Arroyo Bridge — 285 feet long and 75 feet wide — was constructed in 1927 in the style of a Roman aqueduct, spanning a deep arroyo. Years later, it was decided that the arroyo was strangling UCLA’s growth, so workers reinforced the sides of the bridge with concrete retaining walls and filled in the ravine. This gave the campus 24 more acres of usable land. 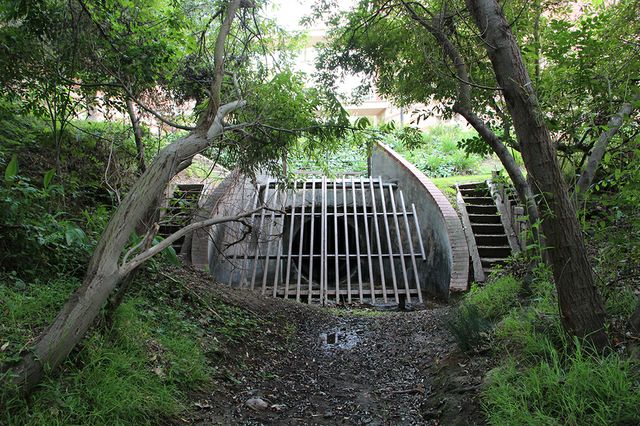 Like the Arroyo Bridge, Stone Canyon Creek is also mostly invisible. The creek was tamed in the 1930s because it too got in the way of development of the campus. But in wet years, it still flows under asphalt streets and concrete buildings, connecting to the Westwood flood channel and making its way to Ballona Creek. A portion of the creek is visible on the west side of the Anderson School complex. 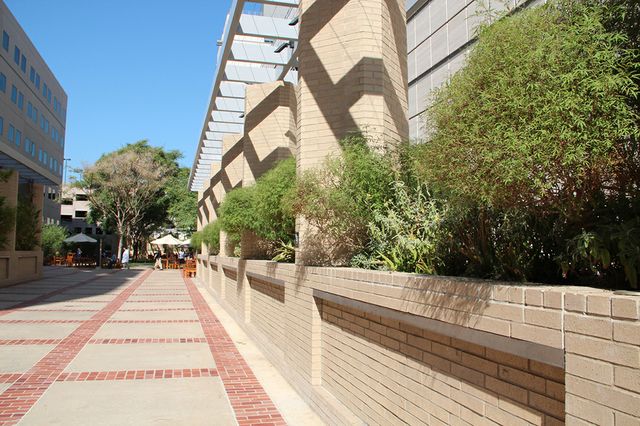 On the south side of the Ronald Reagan UCLA Medical Center, a medicinal herb garden grows. It’s not being used for patients, but for the edification of schoolchildren and adults who can learn about the natural healing properties of marigold, bamboo, cilantro, oregano, agave and other plants just by browsing and reading signs

12. A playground for visionaries 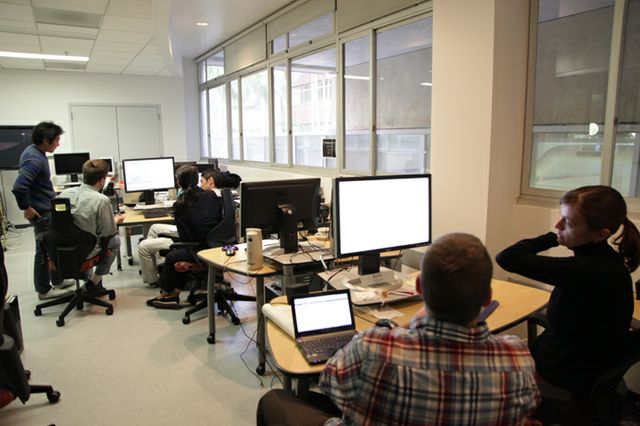 Although there is no sign, Math Sciences 4328A is a techie’s dream playroom. In the interactive, hypermedia environment of the UCLA Technology Sandbox, imaginations can soar in a space designed to nurture visionary thinking about collaborative projects that cross disciplinary borders. 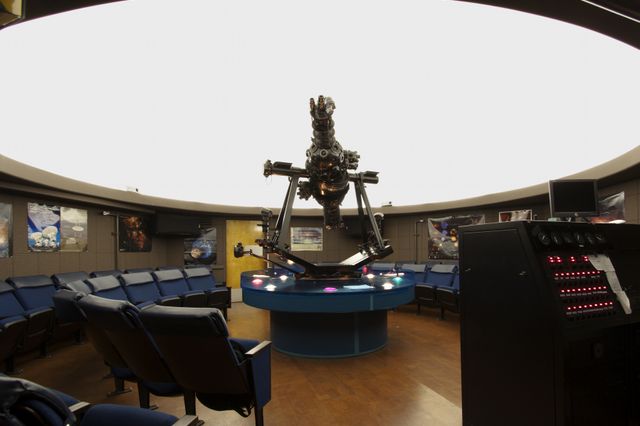 UCLA has its own set of celebrity stars that come out every Wednesday night at 8 p.m. sharp. Take a free peek at the UCLA Planetarium, a white-domed structure on the eighth floor of the Math Sciences Building. Operated by the UCLA Department of Physics and Astronomy, star shows are open to the public and free. On clear nights during the academic year, there’s an extra bonus — telescope viewing of planets, nebulae, star clusters or whatever is visible in the night sky. 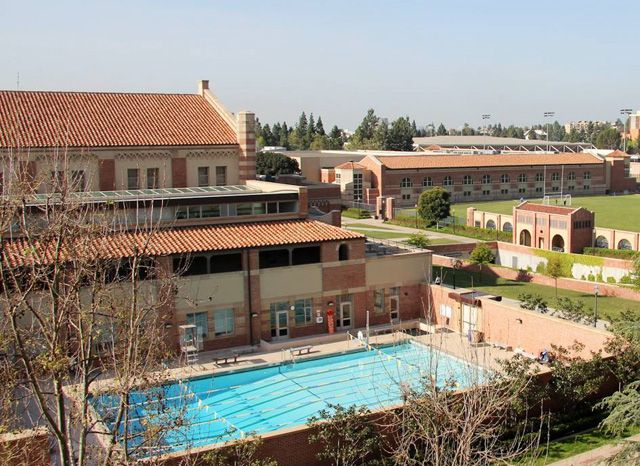 At Glorya Kaufman Hall, home to the Department of World Arts and Cultures/Dance, you might blink twice at a six-lane, 25-yard outdoor swimming pool. It's there because the building once housed the Women's Gym. When the gym was demolished, the North Pool was reopened for recreational swimmers, the Bruin Swim Club and the American Red Cross safety program. 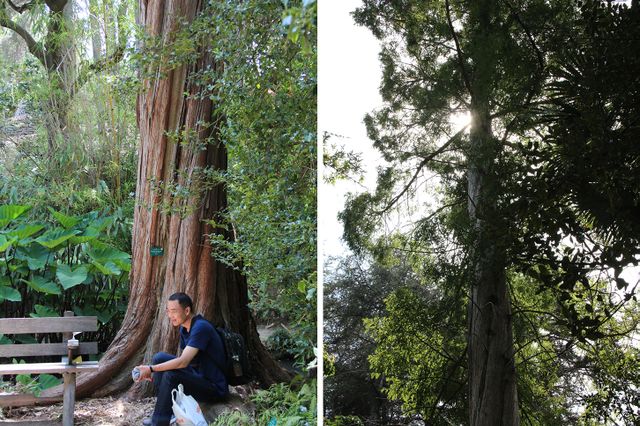 The seven-acre Mildred Mathias Botanical Garden is home to one of the tallest Dawn Redwoods in North America. It’s located next to a stream populated by turtles and fish. The Metasequoia glyptostroboides was thought to be extinct in the wild until it was found growing in central China in 1944. Still on the critically endangered list, UCLA’s specimen was started from the first seeds brought from China in 1948. 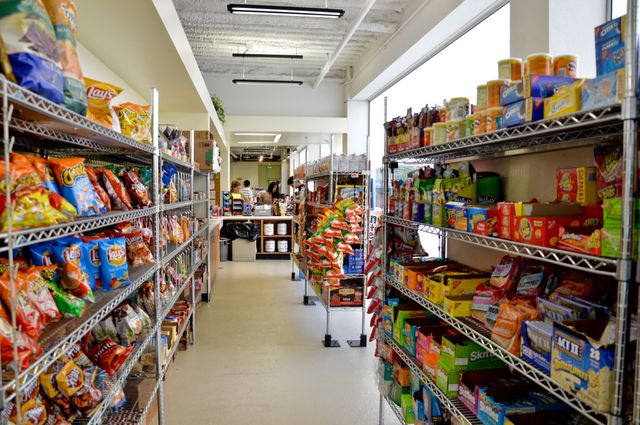 If you’re lost in Boelter Hall — and who hasn’t been at one time or another — you may stumble upon the SEAS Café, located on the glassed-in breezeway on the fifth floor. Opened in 1949-50, it was started by members of the Engineering Society at UCLA as a place to sell donuts and coffee to fill the group’s coffers. Today it’s operated by the engineering school and managed and run by students. 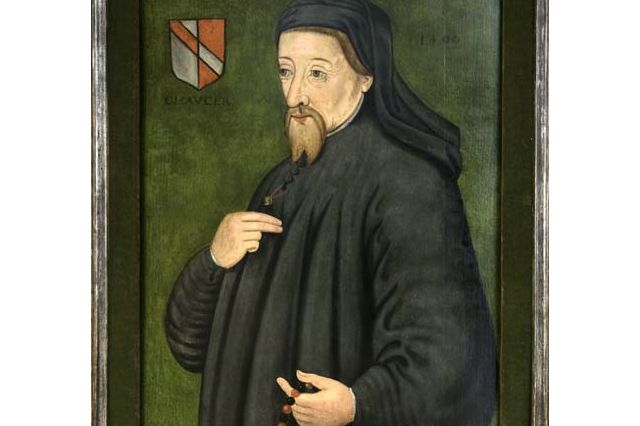 For years, a portrait of Geoffrey Chaucer, known as the father of English literature and author of “The Canterbury Tales,” has been hanging on the wall of the English Department’s Reading Room. The provenance of the portrait has been the subject of faculty speculation. Thus far, the oak plank on which it is painted has been radiocarbon-dated; the glue and pigments have been analyzed; the artist’s style and details in the painting itself have been examined by scholars. And still it remains a mystery. It may be the oldest, known portrait of the poet other than those found in manuscripts — or not.