This spring marks 44 years since a group of black UCLA art students came together to share their vision of history by creating “The Black Experience,” a 10-foot-by-27-foot mural depicting the struggles and achievements of African-Americans in the United States. Flashing forward, this spring also will mark the mural’s celebrated return to public viewing after more than two decades.

“It just felt great to see what we had done 40 years ago coming back,” said Helen Singleton, one of the seven artists who created the mural in 1970.

The mural was painted more than 20 years ago on a wall on the first floor of Ackerman Union next to where Panda Express now operates. In 1992 when the area was renovated, a false wall was built over the mural. In 2012, the Afrikan Student Union initiated talks with the Associated Students UCLA, the entity responsible for operation of Ackerman Union, to explore ways to bring the mural back into public view. Between December 2013 and February of this year, the mural underwent extensive cleaning and restoration, and the Panda Express service area was partially reconstructed. Restoration costs of approximately $23,000 were covered by the student-majority ASUCLA board. 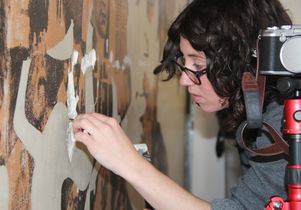 Singleton said that the art piece was created in response to the “emotional turmoil” that took hold at UCLA and other college campuses throughout the United States in the aftermath of the Kent State University shootings, which claimed the lives of four students protesting the Vietnam War. In reaction, protests broke out on campuses across the country, including one that drew thousands of students to UCLA’s Janss Steps.

“When it all died down, what we saw was that a lot of vandalism had taken place on campus,” Singleton recalled. Students decided that a mural depicting pride, achievement and important moments in African-American history seemed like the best response to the situation.

Each of the seven art students — Marian Brown, Neville Garrick, Andrea Hill, Jane Staulz, Joanne Stewart, Michael Taylor and Singleton — is depicted in the mural, along with a young man who was not a student. Their heads, necks and shoulders are overlaid with myriad silk-screened graphics showing a poster advertising the sale of slaves and pictures of African-American leaders, including Harriet Tubman, Frederick Douglass, Martin Luther King, Malcolm X and Angela Davis, among other images.

“It was really, in a compact way, the history of black people up until 1970,” said Garrick, who at the time was an international student from Jamaica and the only freshman involved with the project.

Its relevance has not been lost over time, added Kamilah Moore, currently a fourth-year political science major and chair of UCLA’s Afrikan Student Association (ASU). “I think it’s going to challenge UCLA students, as well as the UCLA community, to become more educated around issues of the black experience,” she said.

A public reception to commemorate the project’s completion will be held May 28 at 6 p.m. in the Global Viewpoint Lounge, located on the A-level of Ackerman. Hosted by the ASU, the event will coincide with its year-end celebration.

Singleton and Garrick said they have been unable to locate the other artists to inform them about the reintroduction of the mural. Both agreed that it would be fitting to assemble the entire group one more time to celebrate the mural’s restoration and its continued relevance.