For Idalys Perez, being at last Saturday’s Bruin Day at UCLA was a dream come true.

The senior from Grant High School in Granada Hills has known since her sophomore year that UCLA — with its combination of academic excellence, location close to home and the pervasive community spirit — was her “dream school.” In 10th grade she even had her picture taken, together with her parents, in front of Pauley Pavilion and promised herself that she’d take that same picture two years later with one important addition ... she’d have her acceptance letter in hand.

“I saw myself becoming part of a community where everyone’s proud to be a Bruin,” said Perez right after she submitted her statement of intent to register Saturday, thus formally becoming part of the Bruin class of 2020. Then she and her parents walked over to Pauley to take that picture.

“Today, wow … everything is finally going as planned,” Gomez said.

Perez and her parents, Edgar Perez and Esmerelda Gomez, proudly wearing an “I love UCLA” sticker, were among the more than 15,700 admitted students, family members and mentors who packed the campus during Bruin Day. Of those, 5,198 were prospective students.

Everywhere on campus there were sights and sounds that showcased the best of UCLA and campus life, from lectures by world-renowned faculty, informational tables staffed by dozens of campus groups, tours up and down the Hill, and musical and dance performances by many of UCLA's ethnic and cultural groups and ensembles.

The event kicked off with a rally in Pauley Pavilion that featured a welcome from UCLA Chancellor Gene Block, performances by the Spirit Squad and marching band, and a video showing UCLA’s historical highlights.

“One thing I’m confident of: You will accomplish an extraordinary amount while you’re here,” Block said to the special guests, who nearly filled the arena. “And why do I say that? Well, in the video we saw some of our graduates who have changed the world, and we know among you will be our future doctors, physicists, lawyers, civil servants, who can make an extraordinary difference to mankind. And the history of this institution demonstrates you’ll be able to accomplish all those things.” 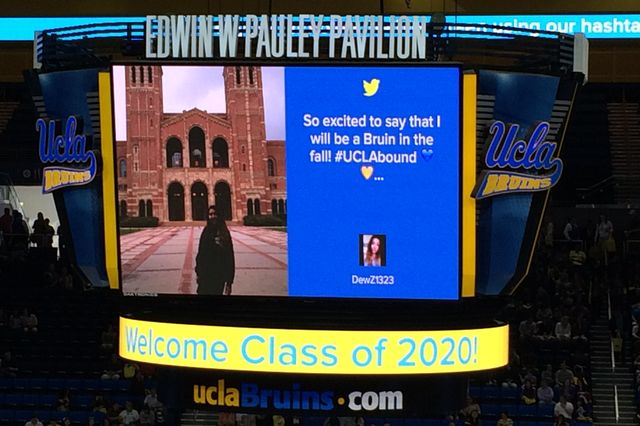 Although students came to Bruin Day from all over the world, it definitely had a California flavor. Throughout the UC system, the number of California resident freshmen admitted for fall 2016 increased by 8,488 students for a total of 66,123 admissions offers — a 14.7 percent increase over 2015. Those numbers show that the system is on track to enroll an additional 5,000 California undergraduates in fall 2016 — and, with continued state funding, 5,000 more over the following two years.

Block noted that this year’s admitted freshmen at UCLA include class presidents, state debate champions, Junior Olympians, outstanding Eagle and Girl scouts, and even the L.A. youth poet laureate. While UCLA set a new record with more than 97,000 applications seeking first-year admission, the university also had 22,000 transfer applicants, once again making UCLA the most applied-to, four-year university in the nation. Bruin Day for transfer students will be held May 14.

“Graduates of this institution do unbelievable things and really change the world,” Block said. “You will be among them. But I’m especially confident that you will even do more.”

One important factor in enabling students to do more is UCLA’s commitment to service. “As a public university we have an obligation to serve the public,” Block said. “And you’ll have opportunities to volunteer to help people less fortunate in Los Angeles, … in our community and in the world.”

The ability of the campus to provide a personal touch throughout the admissions process helped high school senior Amora Haynes decide to follow in her father’s footsteps and become a Bruin. Haynes, who was also accepted at UC San Diego, UC Santa Barbara, Howard University and USC, among others, felt especially impressed when Youlonda Copeland-Morgan, UCLA’s vice chancellor of enrollment management, emailed the high school student personally. 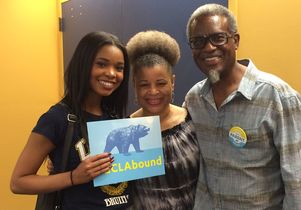 “Youlanda Coupland-Morgan welcomed me, and she was so kind. For her to be so welcoming made this really big school feel small,” said Haynes, who also cited as important UCLA’s academic reputation and beautiful campus, which she visited with her dad, Malik Haynes, who graduated in 1976.

The future political science major said she planned to serve as a UCLA student advocate and meet with lawmakers in Sacramento and Washington, D.C.

Right after Amora formally committed to UCLA, she was surrounded by 15 staffers and volunteers who gave her a rousing eight-clap, one of many that echoed through the Wooden Center as students signed up for UCLA.

It was the participation of 2,500-plus faculty, staff, volunteers, students, parents and alumni that made Bruin Day so successful and welcoming to visitors who crowded Bruin Walk, Ackerman Union, and Wilson and Dickson plazas to enjoy the day. All under a picturesque Bruin blue sky.

“Don’t underestimate the importance of good weather,” the chancellor joked during his welcome speech, “especially when walking across campus to go to events that you might not go to if it were snowing outside. This is truly a spectacular campus.” 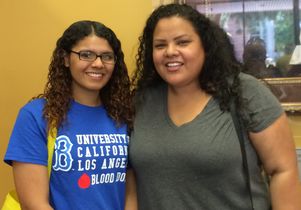 Victoria Martinez, a senior from Wilson High School in El Sereno who grew up in foster care, spent parts of multiple summers at UCLA participating in science camps and programs for foster youth. It was those experiences that put UCLA first on her list of colleges. “Everyone seemed to know each other, and there was a lot of community,” said Martinez, who was accompanied to Bruin Day by her college counselor Janeth Monzon.

But Martinez said that she always viewed UCLA as a “reach” school. With its high academic standards and record of being the most-applied-to university in the country, she wondered whether she’d measure up. To maximize her chances, she took AP classes, joined three clubs, played softball, participated in leadership and studied a lot.

After she nervously opened her email from UCLA, “I took a screenshot and I cried.”

When Martinez was given her celebratory eight-clap after officially becoming a Bruin, she was overcome with emotion.

“I felt like I wanted to do the eight-clap too, but I’m not sure I’m ready to do it yet in front of people,” she admitted.