As individuals who dedicate their careers to designing homes that people live in, buildings that define our skylines and cities that support our existence, architects might be considered the ultimate professional creators.

But when the fourth-largest earthquake ever recorded triggered a massive tsunami that devastated a 350-mile stretch of the Japanese coastline in 2011, leaving more than 18,500 people dead or missing and destroying 161,000 homes, the architect seems small in comparison to the scope of the disaster.

An exhibition at the MAK Center for Art and Architecture in West Hollywood highlights a new role that architects have taken on in the ongoing recovery efforts in Eastern Japan. Organized by Kimberli Meyer, director of the MAK Center, “Groundswell: Guerilla Architecture in Response to the Great East Japan Earthquake” illustrates that architecture can embody a devastated community’s resolve to restore its built environment, reshape its future and even mourn its dead.

Among the architects leading these efforts is Hitoshi Abe, chair of the UCLA Department of Architecture and Urban Design. Abe, who is from Sendai, a city that was severely damaged by the tsunami, has been part of a collective of Japanese architects and designers, called ArchiAid, which grew out of a flurry of post-earthquake emails that Abe and his colleagues sent each other looking for ways to help.

“We thought, ‘Why don’t we convert this into … a network of people who want to help or who want to contribute?” said Abe, who is also director of UCLA’s Terasaki Center for Japanese Studies and served as an advisor to Meyer on the exhibition.

“You feel like architects would be involved in a huge master plan with the government and make a big change,” Abe said, “but none of that happened in this case. There was no superhero architect who provided the future vision.”

So rather than becoming official government partners, ArchiAid members have served in many cases as expert facilitators and consultants to help displaced residents formulate reconstruction ideas that they could present to local and national government officials.

“So architects started to do a bottom-up approach helping local residents communicate with the government authorities,” Abe said. “It’s kind of disappointing in a way, because you don’t have much of a voice, but at the same time it creates … a new role for architects.”

One room in the exhibition, for example, expressed the theme of “Architecture as Grief Work.” It contains a scale model of Kesennuma City, which was struck hard by the earthquake and tsunami. Architecture students under the direction of Osamu Tsukhashi built the model, which was all white. Then, working with designers, residents added colors. Purple flags contained historical information about a location, blue ones displayed place names, yellow flags signified a personal memory, and red ones marked memories of the disaster.

These types of models were built for dozens of towns and villages by more than 600 students from 25 Japanese universities.

“It reminds us that life is what makes a city a city,” reads a description emblazoned on a glass table in the room. 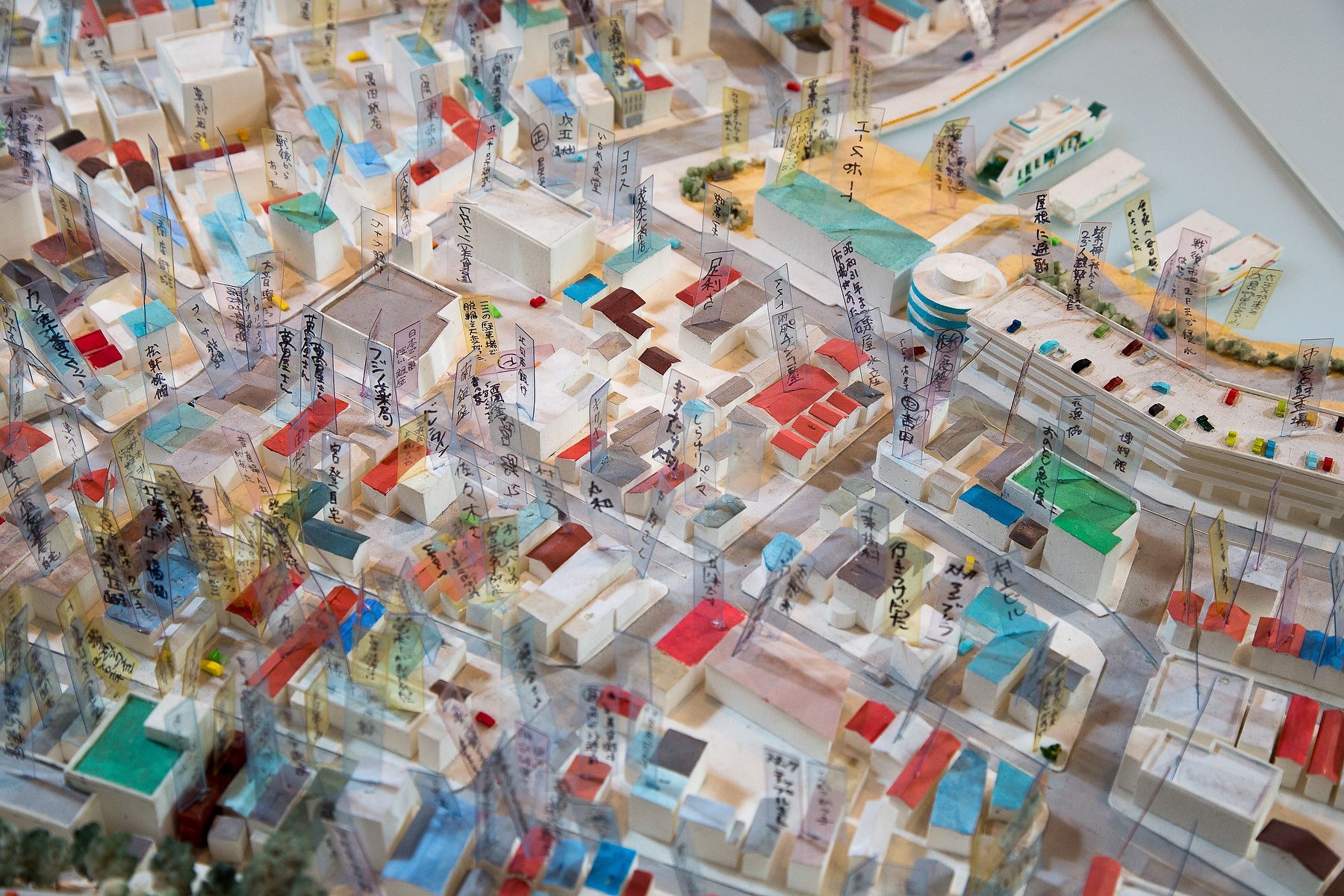 Abe’s work is displayed in a room dedicated to “Architecture as Not Torture.” A problem endemic to much public housing in Japan, Abe said, is a lack of shared public spaces. Public housing typically situates all living rooms on the south side of a building to provide maximum equal sun exposure for everyone, but the result is a lack of shared community. In this case, Abe noted, that design would have taken grief-stricken survivors ripped from their tight-knit communities by the tsunami and isolated them in impersonal towers with strangers.

Instead, Abe and three other architects whose designs are all part of “Architecture as Not Torture” developed a new paradigm by reconfiguring the layouts to have units face each other across large corridors. They then added benches, ledges and intersections to create engawa, the transitional space in Japanese homes between inside and outside, private and public.

It took more than six months for the government to approve the reimagined public housing designs. “Everyone was stuck on the idea of individual equity so everyone gets sunlight,” Abe said, “rather than creating a unique environment to encourage people to communicate.”

Abe said it was understandable that overworked government officials were acting with a triage mentality rather than executing long-term vision, but no less frustrating.

“Let’s say you have to build a new elementary school. Should we just rebuild it as it was or, because money is coming, should we rebuild it for the future so that it could better withstand a future tsunami?” Abe said. “If you’re that busy, it’s easier for them to say, ‘Let’s build how it was.’ But that’s a missed opportunity. That’s where architects come in and say, ‘Maybe we can help.’”

Another factor that guided ArchiAid’s work was that this area of primarily fishing villages and small farms was already suffering a population drain. “It’s a beautiful area with nature, and it was so sad that the tsunami destroyed this area, but at the same time this could be a really good opportunity to plan for the future,” Abe said.

One idea that architect Senhiko Nakata developed in conjunction with longtime residents combined the area’s native flora with an eye toward future commercial viability. They wanted to create a local industry that would use resin collected from trees to manufacture a special lacquer used by artists. Another idea born of this bottom-up collaboration was to start fishing schools, Abe said.

“Jobs are essential for the recovery of these damaged areas,” Abe said. “What we learned is that in these areas, jobs rely on this community itself. If you’re the barber, your customers are all the people around you. It’s community.”

Abe said he hopes that all the lessons that ArchiAid members learned, which are documented in the Groundswell show, will be valuable in the future.

“There has to be some kind of a shared knowledge so we will have a better solution to disasters. And the exhibition really helps to do this,” said Abe. “Maybe this approach — bottom-up — might look a little bit sad, because you have to admit that you are no longer a superhero.  But maybe it could open up a new way for architects to influence a city or an environment.”