UCLA pulled out all the stops for the nearly 17,000 potential incoming freshmen and their families who visited campus for the annual Bruin Day on April 15, which for many, marked a final, exhilarating stop on their college-search journey.

In his morning greeting in Pauley Pavilion, Chancellor Gene Block drew laughter as he pointed out the glorious weather that awaited a day of activities and slyly pointed out the gloomier forecast a bit farther north in the state.

“These two people, I think say it all about UCLA — academic excellence, athletic excellence and leadership,” Block told the crowd, which set a record for most attendees at Bruin Day. “They have changed the world, and that’s what this is all about.”

In a marathon day of events, students and their families took formal or self-curated tours of campus. They navigated a rich sea of information on academic offerings, campus organizations and student groups, and got an eight-clap tutorial during a pep rally from the band and spirit squad at the foot of the Janss Steps.

The day offered a broad taste of UCLA campus life, from the option to play oversized Jenga with Greek student groups, to attending a “Breaking Bad”-themed chemistry lecture from one of UCLA’s most popular professors Neil Garg — just one example of a robust schedule of illuminating seminars from faculty. 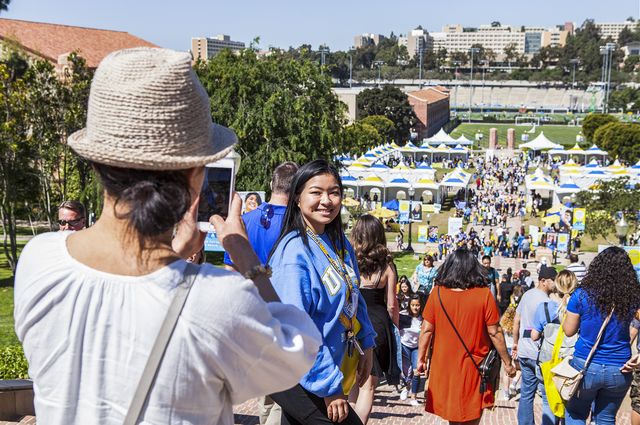 Matt Harbicht/UCLA
Admitted students and their families packed the top of the Janss Steps to take photos of the UCLA campus.

“Students spend a lot of time gathering information and reading about schools during the admission cycle, but there comes a time when they really have to experience the campus as a living, breathing thing,” said Gary Clark, director of undergraduate admission for UCLA. “There’s nothing I can send them that can take the place of the organic enthusiasm and excitement they experience as part of Bruin Day.”

Bruin Day creates an opportunity for students to envision how they personally fit into the spirit of optimism they have been reading about in UCLA literature, he said.

Incoming freshman Michelle Servin from Lawndale, California, has seen herself as a part of the UCLA community since a middle school field trip brought her to campus years ago. She officially committed to attend UCLA on Saturday, with her proud parents beside her.

“It’s my dream school,” she said. “From the first time I visited, I just knew I wanted to go to school here someday. Sometimes you just know.” 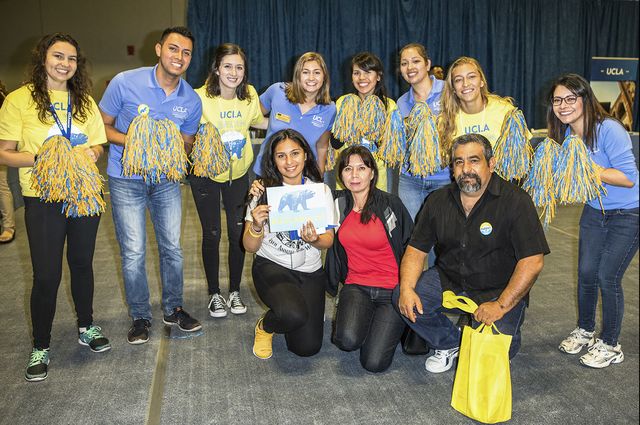 Matt Harbicht/UCLA
Michelle Servin and her family, from Lawndale, just after Servin committed to enrolling at UCLA for Fall 2017.

“We’ve got a Bruin walking here,” cheerleaders shouted as Edgar Martinez entered the room where he would also officially sign up to attend.

“I want to be surrounded by a big mix of cultures,” he said.

Martinez said that he’s still undecided on a major but hopes to find his place in psychology, political science or sociology.

College, and UCLA in particular, is a place where students learn how to stand up for what they believe in, said Youlonda Copeland-Morgan, vice provost of enrollment management, earlier in the day at the welcome ceremony. “At UCLA you will become global citizens that drive social and economic change.”

That’s definitely what brought Rebecca Cheung from El Monte, California to campus. Cheung wants to study environmental science and UCLA’s expertise in the field appealed to her.

“I didn’t think I was going to get in, but UCLA was one of my top choices,” she said, shortly after making her commitment to UCLA official on Saturday. 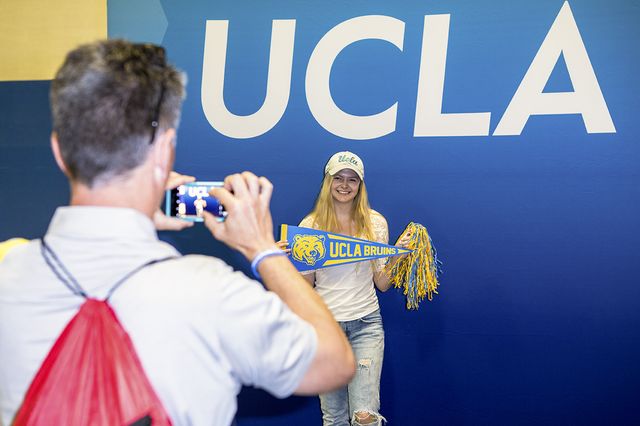 Matt Harbicht/UCLA
Emmalee Belleci and her dad, who is taking a photo of her at UCLA Bruin Day 2017.

For dancer Emmalee Belleci from Elk Grove near Sacramento, it’s the globally focused ethos of UCLA’s world arts and cultures department that made UCLA her top choice over any other place to study dance performance.

“There’s no other program like it,” she said. Belleci also plans to study abroad as part of her time at UCLA. “I’m excited to consider how dance and world cultures intersect.”

Students pondering their acceptance to UCLA made the most of the day, inserting themselves into the campus picture.

Clark said families began lining up as early as 7 a.m. to take pictures with the bear statue on Bruin Walk, or with the plethora of oversized UCLA logos peppering campus. After the morning ceremony in Pauley, people flooded down to the floor where they lay down to take pictures of themselves against the UCLA logo on the iconic Nell and John Wooden Court. 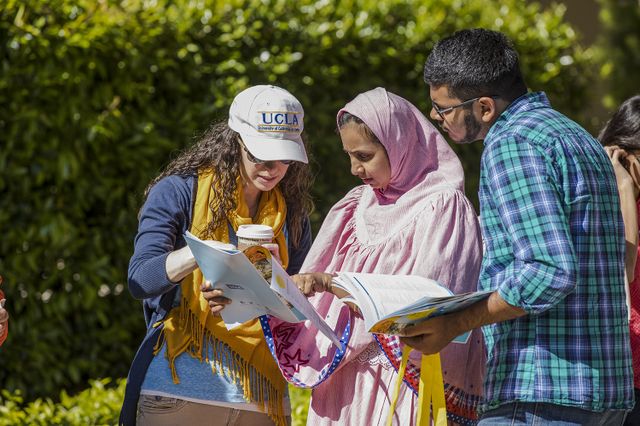 They also heard testimonials from current students. Members of the band and spirit squad shared stories of how they found a sense of community and belonging at UCLA.

Undergraduate student body president Dan Siegel shared his own story during the morning welcome program, congratulating the visitors for being accepted in the most competitive admissions year in UCLA’s history.

“When I was in your position four years ago, like I am sure some of you are, I was deciding between UCLA and Berkeley,” he said. “But it only took me a walk around this beautiful campus on Bruin Day for me to commit to UCLA and as the years have passed I have never once doubted it was the right decision for me. It instilled in me a confidence, a Bruin confidence, that I will have for the rest of my life.”

At one point he turned to Block and joked. “I’m supposed to graduate in June, but do I really have to leave?”