In 2013, Clayton Frech and his young son, Ezra, were in Oklahoma in the middle of tornado season so that Ezra could race in a Paralympics competition on his prosthetic leg. That's when Frech began to wonder why Los Angeles didn’t host its own competition.

That was the moment when L.A.’s own event began to take shape.

This weekend, UCLA will host the first Paralympic-style track and field competition in California, open to both civilians and veterans. Frech, who comes from a family of Bruins and earned his M.B.A. at UCLA’s Anderson School of Management, partnered with his alma mater to create the UCLA Angel City Games.

More than 150 athletes of all ages and skill levels will participate, and while some have trained for years in their sport, other competitors  will be children, teens and even adults who may not have realized until recently that sports were an option for them. On Friday, the day before the competition opens, participants will meet with coaches at an all-day clinic to try out different sports. They’ll get to throw a javelin, toss a discus, do high and long jumps, and race on prosthetics or in wheelchairs. Specialized wheelchairs will be available for the throwing events.

“I’ve loved sports since I was a baby, and I play team sports, but until my dad took me to Oklahoma, I’d never done track,” said Ezra, now 10 years old with nine national records and regular bookings as a motivational speaker. On Saturday, he’ll compete in more than half a dozen events, including his favorites, the long jump, high jump and 100-meter dash.

“The spirit of inclusion — providing sports and athletics for people of all abilities — is in our DNA,” said Mick Deluca, the assistant vice chancellor of campus life who oversees UCLA Recreation. About a month after the Angel City Games for athletes with physical disabilities, the campus will host several competitions for the Special Olympics World Summer Games for athletes with intellectual disabilities as well as serve as a site for one of its residential villages.

“UCLA’s prominence gives us the ability to put Angel City Games on a bigger stage and really raise its profile,” Deluca said. “That's part of UCLA's ethos of serving not just our students, but the community at large. The Angel City Games are another way to bring adaptive recreation to children, adults, veterans and the rest of the Bruin community.” 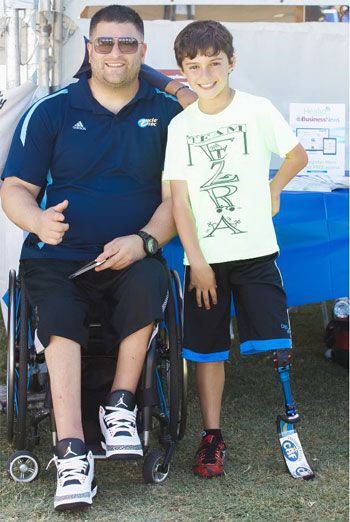 Michael Garafola, coordinator for UCLA Adaptive Recreation and an accomplished wheelchair basketball player, is a co-founder of the UCLA Angel City Games with lead founder Frech. Garafola, who has recruited athletes and coaches for the events, including an exhibition wheelchair-basketball game on Friday, is especially excited about getting people involved who may have thought they couldn't play sports.

“I was captain of my freshman basketball team before I was injured in a car accident when I was 15, and for 12 years I didn’t play any sports,” Garafola said. “Then I heard that the Lakers had a wheelchair basketball team. It was a rebirth. The accident changed my life once, and learning about adaptive sports changed my life again.”

The competitive fire that he had missed came back, he said.

“We want the Angel City Games to be a celebration of adaptive sports, especially for kids who are new to sports or who were just injured, so they can see people similar to them in competition,” Garafola said. “And this is also about education. We’re holding the competition in UCLA’s historic Drake Stadium, and we want the participants to know that these places, and a university education, are available to them.”

As part of Friday's events, a celebrity wheelchair basketball tournament will be held followed by scrimmages among the athletes who may have just learned the game that afternoon.

“We’re inviting able-bodied and disabled athletes to play,” Garafola said. “This is about inclusion and understanding.”

A report by UCLA Anderson students on lowering the cost of prosthetics by using 3D printing will be released Friday. Many adaptive athletes need specialized prosthetics to compete, but they’re often very expensive and not covered by insurance.

After the games are over, UCLA Recreation organizers hope more Bruins, veterans and community members will know about and participate in the campus’s adaptive recreation programs.

“We can run almost any program — it’s just a matter of demand,” said Garafola, who is itching to form a collegiate wheelchair basketball team at UCLA and join the National Wheelchair Basketball Association.

Clayton Frech anticipates this year’s games will be the first of many.

“Our goal is to add all the summer Paralympic sports and make this a weeklong event,” he said. “This is just the tip of the iceberg.

Visit angelcitygames.org to learn more and sign up to volunteer.