As legislators gathered at the UCLA Meyer and Renee Luskin Conference Center to take stock of the state of affairs for African Americans in California, there was a sense of pride from the members of the UCLA Ralph J. Bunche Center for African American Studies. Their years of research were woven into the many conversations that took place during Feb. 8’s State of Black California meeting.

“Today’s meeting is not about discovering the problems, it’s about looking at solutions, because we know what the problems are,” said Assemblymember Shirley Weber, chair of the California Legislative Black Caucus, which this year moved the annual meeting to UCLA for the first time. “We know where we are, whether in the schools, social justice or criminal justice reform. We know where we are. And the question is, how do we get to a better place?”

Weber — a triple Bruin who completed her bachelor’s, master’s and doctorate at UCLA — said that supporting and helping fund organizations like the Bunche Center is important to solving these problems

“I became really impressed with what they were doing,” Weber said. “We didn’t really have a strong black think tank in California that focused on African American issues. And as a professor and researcher, I was intrigued by that, because I know that data and information generated can drive a lot of change.”

The Bunche Center has continued to evolve, recently unveiling the Black Policy Project, which was a guiding force for hosting the Legislative Black Caucus on campus.

Bryan said that it’s vital that policymakers rely on more than isolated anecdotes and gut feelings, but rather “rigorous, qualitative evidence from the university.” In taking some of the research out of journals and putting it directly into the hands of community organizers and policymakers, he said: “We see ourselves as bridging the gap.”

In regards to the State of Black California, UCLA faculty, along with experts from all walks of public policymaking, met as panelists before an audience of several hundred throughout the day on topics including education, public safety, civic engagement, the 2020 census and building a bench of African American public officials.

Thurmond shared the stage with Pedro Noguera, professor of education in the UCLA Graduate School of Education and Information Studies, among others, on the education panel, which focused on closing the achievement gap. They talked about the need for a greater commitment to all factors that contribute to education, not just education itself.

“You have to focus on both what’s happening in school and outside in the community,” said Noguera, who recently took his policy report, titled “Beyond the Schoolhouse,” to Sacramento for meetings with legislators. “You need both. If you only look at schools, which is what education policy has done, nothing is going to change. We need a more comprehensive change.”

Thurmond talked about the need to invest in schools that not only have well-qualified teachers, but also counselors, mental health staff and other resources to support the needs of students who have experienced homelessness, trauma and violence in the community. 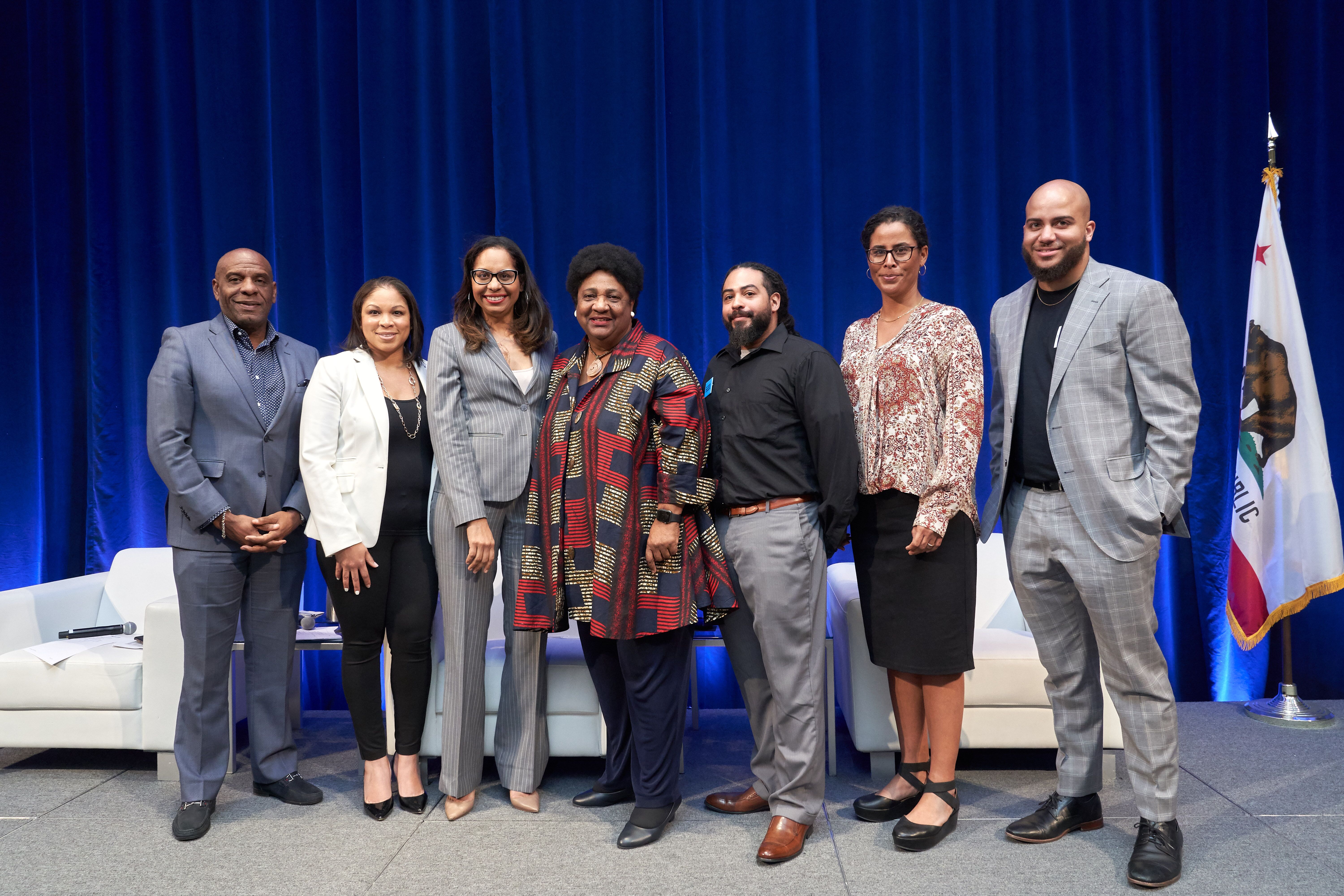 Later in the day, Lorrie Frasure-Yokley, associate professor of political science and African American studies in the UCLA College, talked about crunching the numbers in regards to African American voter engagement. She emphasized the need for consistent engagement with the black population — about gathering data continually, not just during election season.

“How about we do that — not just when we want something from the community,” she said, counting her own research project, the Collaborative Multi-racial Political Study, as part of the potential to do better by African American voters. “Exit polls are useful, but they are not a live random sampling of the black electorate. We are not a voting monolith. Ask us. Understand us. And not just when you want something.”

Black Lives Matter co-founder and UCLA alumna Patrisse Cullors concurred. She noted how out of place she felt when she first started getting civically active.

“People weren’t actually trying to have a conversation with me,” she said. “There weren’t elected officials. There weren’t ballot measures. I was very ignorant to the voting process.”

That has changed. Cullors has been a driving force in “YES on R,” a group committed to the passage of California jail reform measure that will be on the ballot March 3. Measure R would, in part, create an independent civilian oversight board for the Los Angeles County Sheriff’s Department, and give that board subpoena power.

Assemblymember Kamlager, whose 54th district includes UCLA, moderated a panel about the 2020 Census. The participants discussed how state representatives and grassroots organizations are focused on how to build trust and confront the tides of online misinformation that are already being targeted at certain communities and demographics, including African American people in California.

“Put simply, the census is how we get our money,” Kamlager said. “Money we need for health care, housing programs, senior services, veteran’s benefits, everything. The state government is determined to fully count every community and every person in California. Meanwhile the federal government is doing its best to make sure we are undercounted. And it is critical because California is at risk of losing a congressional seat.”

Bradford, the Legislative Black Caucus’s vice chair, opened the day’s proceedings. “I want to thank you all for making this a priority, and celebrating the beginning of Black History Month by understanding where we are as a people in 2020,” he said, “and where we’re going to make sure we get to, over the next couple of years.”

The Bunche Center, and specifically the Black Policy Project, plan to remain part of the conversation.

“The Bunche Center does not regard research and data as an abstract enterprise,” she continued. “We believe in the power of research to change lives.”