The story behind UCLA’s rise into a world-renowned university traces back more than a century to a battle over Southern California’s ambition to shape its destiny and step out of the shadow of the more powerful north. 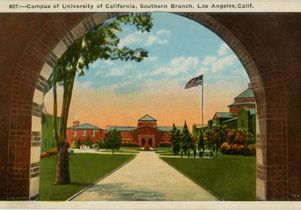 On one side were civic and education leaders, led by newspaper editor Edward Dickson. They were impassioned by one conviction: for Southern California to thrive it needed its own state-funded university.

Pushing against this audacious notion stood a majority of the University of California Board of Regents and most of the faculty leaders at Berkeley, the prestigious and only state campus. Creating a second campus, they felt, would siphon away resources and talent and risk Berkeley slipping in reputation.

Dickson, the sole regent living south of the Tehachapi Mountains at the time he was appointed to the board in 1913, knew otherwise.

It took the determination and vision of Dickson and Ernest Carroll Moore, president of Los Angeles State Normal School, the biggest teacher training school, to win this struggle for Southern California. After many skirmishes with the regents, on May 23, 1919, Gov. William Stephens signed Assembly Bill 626, transferring Moore’s state school on Vermont Avenue to the regents and creating the Southern Branch of the University of California.

“No one can imagine what that means to the young people of this part of the world nor what this institute will one day become,” Moore, who became the first provost to lead UCLA, wrote prophetically in his diary.

When the Southern Branch opened, the preparation of teachers remained at the forefront of its curricula, with 1,250 students in the Teachers College joined by about 250 undergraduates in letters and science. Women outnumbered men six to one.

As UCLA, which has grown to become the most applied-to university in the United States, begins to celebrate its centennial, the founders of the Southern Branch would have to marvel at what they created.

In 1969, the infant internet, then called the ARPANET, communicated its first word, “lo,” from a lab in Boelter Hall, home of the UCLA Samueli School of Engineering. Computer science professor Leonard Kleinrock, the inventor of a new mathematical theory called packet switching, successfully sent a two-letter message to Stanford University before the connection broke. What got truncated was the word “login,” but internet history was nevertheless made.

“I did not foresee, at that time, the way [the internet] would reach out to everyone everywhere and impact every aspect of our 21st century,” Kleinrock said in retrospect. 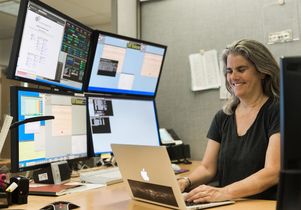 Ideas that hold the promise of becoming world-changing technologies are a big reason why UCLA has become a powerhouse in research, attracting an average of $1 billion in external funding every year since 2009–10. Agencies such as the National Institutes of Health, the National Science Foundation and the National Endowment for the Humanities continue to express their confidence in the promise of UCLA’s research.

In 2003, astronomy professor Andrea Ghez became the first scientist to confirm the existence of a supermassive black hole at the center of our galaxy.

For decades, scientists had debated the case for the black hole, but no one could prove its existence until Ghez developed telescopic imaging techniques for identifying and photographing distant stars. That first clear photo of the Milky Way she produced changed humanity’s understanding of how galaxies form.

There have been 14 Nobel Prize winners associated with UCLA, including seven alumni laureates. In this group was Ralph Bunche, the first African American to receive a Nobel Prize. In 1950, he was awarded the Nobel Peace Prize for mediating a truce between Arabs and Jews in the Middle East, resulting in the 1949 Armistice Agreements that helped end the first Arab–Israeli War.

UCLA has also given the nation some of the greatest names in sports. Legendary coach John Wooden led the men’s basketball team to an unprecedented 10 national championships in 12 years and redefined what success means with life lessons in perseverance, humility and grace.

The UCLA campus itself has also been transformed since the first students arrived in Westwood from Vermont Avenue on Sept. 23, 1929. They assembled in Royce Hall, one of the four original Italian Romanesque-style brick buildings erected on a wild chaparral hillside with views of the Pacific Ocean.

UCLA grew with Los Angeles into a major West Coast institution of more than 44,000 students, transformed starting in the 1950s from a school of commuters into a vibrant residential community and year-round center of activity. The 419-acre Westwood campus is a dynamic mix of classrooms, residence halls, labs, restaurants, libraries and medical centers. 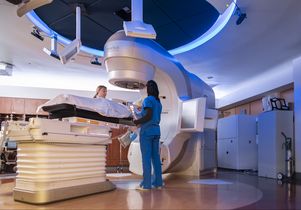 Museums, galleries and performance spaces have made UCLA a must-visit arts and culture destination. UCLA’s Center for the Art of Performance, with its programming, attracts audiences and artists from all over the city and around the world to iconic Royce Hall.

Students of the fine arts and architecture have learned from leaders in their fields such as jazz guitarist Kenny Burrell, architect Richard Weinstein and muralist Judy Baca. In ethnomusicology, UCLA has been at the vanguard of celebrating and advocating for musical cultures and traditions from around the world. The UCLA Film and Television Archive preserves the world’s film legacy. Prominent research collections on campus include holdings of meteorites, rare books and photographs, even bird feathers.

UCLA’s impact extends beyond research and culture; it is also an economic catalyst. A recent study found that UCLA generated $11.06 billion in annual economic activity and supported more than 72,700 full-time jobs throughout the state. To the benefit of the nation’s economy, entrepreneurial researchers at UCLA have produced nearly 3,000 inventions and launched more than 140 companies. The nicotine patch, for one, was invented by UCLA pharmacologist Murray Jarvik and other doctors on campus.

The UCLA Health system is another example of how the school has grown in ways that Dickson and Moore may never have dreamed. UCLA Health operates four hospitals and more than 170 medical offices throughout greater Los Angeles. The first case of AIDS anywhere was identified at UCLA in 1981. The UCLA solid-organ transplant program, based at the Ronald Reagan UCLA Medical Center, is one of the largest in the United States and has extended the lives of tens of thousands of people. Operation Mend, started at UCLA, provides free surgical, medical and psychological treatment for post-9/11 service members, veterans and their families.

In 100 years, the ranks of UCLA alumni have swelled to more than 500,000 Bruins. Distinguished alumni can be found in many fields and include actress Carol Burnett, who received the Mark Twain Prize for American Humor in 2013; Los Angeles mayors Tom Bradley and Antonio Villaraigosa; Elinor Ostrom, the first female Nobel laureate in economics; Francis Ford Coppola, Academy Award-winning director; Paul Terasaki, whose research in “tissue typing” drastically improved the ability of surgeons to accurately match organ donors with recipients; and Jackie Joyner-Kersee, the six-time Olympic medal winner and the woman Sports Illustrated called the “Greatest Female Athlete of the 20th Century.”

As the last 100 years in UCLA history have demonstrated, the achievements in the next century could surpass all expectations as well. 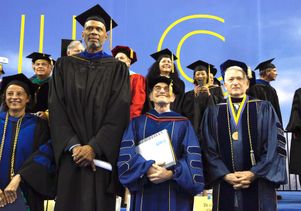 Venturing to different corners of campus one may find professors and researchers who are designing robots that can assist in surgery and others that could aid in search and rescue in disaster zones; forcing a reexamination of scholarship around human migration; rewriting the rules of storytelling to incorporate virtual and augmented reality; and exploring our smallest frontiers in the nanoscale.

To build on UCLA’s history of innovation and creative thinking and leverage its tradition of faculty collaboration across disciplines, Chancellor Gene Block launched the visionary Grand Challenge Initiative in 2013 to take on the most critical problems facing society. So far, the two projects make up “the biggest, most collaborative and potentially most transformative efforts UCLA has undertaken to date,” the chancellor said.

Engaged in the first challenge are more than 150 faculty, researchers and scholars who are committed to tackling climate change in Southern California. They have launched more than 40 research projects, all aimed at shifting the Los Angeles region to 100% local water and renewable energy, while also enhancing the health of its ecosystem.

For the second challenge, as immense in scope as the first, scientists and scholars aim to cut the burden of depression in half by 2050 and eliminate it by the end of this century.

With such visionary goals already defined, it’s clear that UCLA will continue being a transformative force in the next 100 years.