He was UCLA’s first four-sport letter winner and the first African American to play Major League Baseball. He was an athlete, a  businessman, a serviceman, an advocate for civil rights and someone who believed that “a life is not important except in the impact it has on other lives.”

This year, Jackie Robinson’s autobiography, “I Never Had It Made,” is being read by thousands of incoming freshman and transfer students, faculty, staff and alumni as part of the six-year-old UCLA Common Book program that aims to spark discussion and reflection as well as build community among new students.

“The Common Book is intended to generate discussion and reflection among students, faculty and staff around local, national and global issues; it should also serve as a springboard to building student community while on campus and contributing to the larger community as a Bruin,” wrote Chancellor Gene Block in a letter to students that appears at the beginning of the book. “‘I Never Had It Made’ was chosen because it provides a platform to discuss historical events, campus climate, perspectives on life through the eyes of both an athlete and activist, and other topics relevant to a broad cross-section of the Bruin community. Discussions, however, are just the beginning.”

Born in 1919, the year of UCLA’s founding, Robinson began his academic career at UCLA in 1939. He arrived on an athletic scholarship from Pasadena College and soon became a national college champion in track and field. He earned back-to-back conference titles in basketball. He becamean honorable mention All-American in football and played baseball, the sport for which the future Brooklyn Dodger became best known. 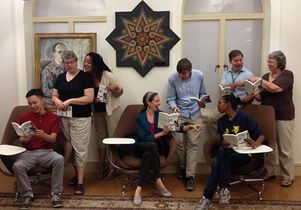 Victoria Maches
Staff members from the Powell Library read this year's Common Book. Campus departments and organizations, as well as individuals, were encouraged to share photos of themselves reading the book on Facebook and Twitter.

In his autobiography, originally published shortly after his death in 1972, Robinson describes his early years and influences, including his time at UCLA where he met his wife, Rachel.

“Many people know about Jackie Robinson, but this book really opens up his world beyond athletics, and speaks about his activism and his true experience on this campus and in the world as a black man and a pioneer,” said Allison McComb, director for First Year Experience in the Division of Student Affairs.  “I love that students will come to understand the complex persona behind Jackie Robinson.”

On Oct. 1, freshman and transfer students will gather on the Hill, site of undergraduate residential complexes, and on the main campus to discuss the book. These student-led discussions will be preceded by a talk by Jullien Gordon, a nationally recognized speaker who graduated from UCLA with a degree in business economics in 2003. Gordon, author of four books, including “The Ultimate Guide to Graduation” and “101 Things to Do Before You Graduate,” will speak about first-year experiences at UCLA and student success from 5-6 p.m. in the Northwest Campus Auditorium. The evening wraps up with a screening of “42,” a biographical film about Robinson that was released in 2013. The film will be shown to students from 8–11 p.m. in the Palisades Room of Carnesale Commons.

In addition, a number of professors will be using the book as inspiration for their class discussions and coursework. Among them will be gender studies assistant professor Michelle Erai, who will teach a Fiat Lux class this fall that will challenge students to write biographies of other notable former UCLA student-athletes.

“I’m hoping we’ll be able to make the connection between cultural production, including sports, and political activities and analyses,” said Erai, who taught a sports-themed Fiat Lux course last fall that explored the intersections of race, gender, sexuality, class and disability. “I’m also hoping the process will provide a useful way for students to practice their research skills and get to know the libraries.”

Over the past six years, UCLA’s Common Book program has expanded considerably, said McComb, by partnering with a number of campus units and departments, including the Powell Library, the UCLA Lesbian Gay Bisexual Transgender Campus Resource Center, the Bruin Resource Center, the Volunteer Center, the UCLA Alumni Association, the Hammer Museum and the Student Committee for the Arts, to name a few.

This year, organizers have also added a social media campaign on Facebook and Twitter, including photo contests for students, staff and faculty; and calls for readers to submit their favorite quotes from the book.

And it’s not just students who are getting into the Common Book experience. Last year, the program welcomed its first UCLA Alumni Association chapter into its readership. This year, alumni chapters in the San Fernando Valley and Colorado, and other locations, will be reading the UCLA Common Book.

In addition, the UCLA Store prominently displays the Common Book each year and offers it to the public at a discount.

The UCLA Common Book program was launched in 2009. Book nominations are accepted year-round, and selections are determined by a committee of students, staff and faculty. Typically 40-50 titles are submitted for consideration, said McComb. After two rounds of cuts, the committee reads the remaining books and then offers its recommendations to a team of faculty-in-residence who make the final decision.  Previous Common Book picks have included “Mountains Beyond Mountains,” “Zeitoun,” “The Immortal Life of Henrietta Lacks,” “The Other Wes Moore” and “Pedro & Me.”

See the entire schedule of events welcoming students to campus.