The auditorium in Schoenberg Hall was dark, save for a spotlight that shone on a single musician on stage. He raised a shakuhachi — a Japanese flute — to his lips and began to play a beautiful, mournful melody.

The curtain rose, revealing a group of degree candidates seated on the stage, clad in cap and gown. Joyful cheers burst forth from the packed house, followed by a long and enthusiastic standing ovation. The degree candidates smiled, and a few wiped away tears, as the familiar strains of “Pomp and Circumstance” filled the hall.

Although all the traditional elements were there, this May 15 event was not your usual commencement ceremony, nor was this your usual group of soon-to-be graduates. These were 48 of the nearly 200 Japanese American former students — or, in some cases, their representatives — who had been forced to leave UCLA and enter internment camps when President Franklin D. Roosevelt signed Executive Order 9066 in the winter of 1942.

Some of them went on to finish their degrees at Midwestern colleges that would accept Japanese American students, while others opted not to return to school. Still others — such as head yell leader Hitoshi “Moe” Yonemura, who was killed in Italy in 1945 while serving in the U.S. Army’s famed 442nd Regimental Combat Team — never returned home at all.

But for those who could come, this was a special day. Since 1972, the University of California had not granted honorary degrees, but in 2009 the Board of Regents approved a rare exception for these students. So these Nisei (second-generation) Bruins — most in their late 80s and early 90s — happily returned to UCLA from points across the country to receive an honorary degree from their alma mater.

“This morning, we will confer an honorary degree on our UCLA students whose education was interrupted due to Executive Order 9066,” said Chancellor Gene Block. “Yet all of us have come to recognize that it is you who have bestowed an honor upon us. Each of you has uplifted us by your grace and by the lives you have led. We know there are remarkable stories represented by each of the honorees today, as well as by those who are with us only in spirit.”

Tritia Toyota, a UCLA alumna who holds an appointment as adjunct assistant professor in the departments of Anthropology and Asian American Studies at UCLA, served as master of ceremonies.

She introduced the morning’s speakers, including Lane Hirabayashi, the UCLA George and Sakaye Aratani Professor of the Japanese American Redress, Internment and Community, and chair of the Department of Asian American Studies. Hirabayashi relayed the story of his father, Jim, who was denied admission to Washington State University because the school’s “quota” of Japanese American students had been filled.

Hirabayashi’s uncle, Gordon, is well-known throughout the Japanese American community for his efforts to fight the U.S. government’s curfew and mass incarceration orders. Gordon served time in federal penitentiaries but insisted on working toward his bachelor’s degree, a feat that took nine years.

Representing current UCLA students was Edward Kobayashi, president of the UCLA Nikkei Student Union, who said he was grateful for the privilege of joining the honorees in the Class of 2010.

“For students of my generation, internment is a concept that is difficult to grasp, much less understand,” he said. “That is why I believe that this ceremony, along with all the other honorary degree ceremonies across California, has particular significance to the younger generation.

“Today, we enjoy living in a diverse society, where most people of different ethnicities and sexual orientations are accepted and treated with respect. This is the privilege that exists today as a result of the foundations that previous generations have laid for us, and the struggles they have overcome.” 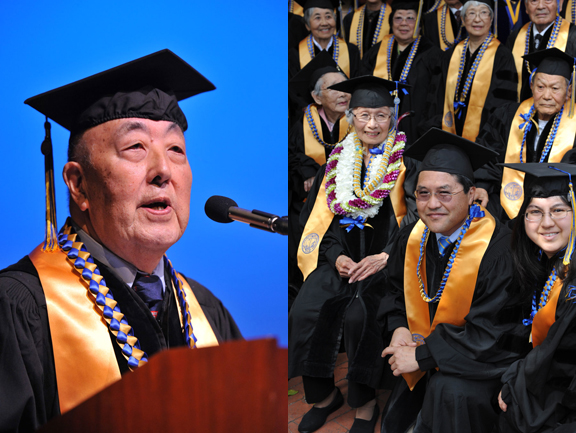 Fumio Robert Naka, who was selected to give the honoree address, traveled from his home in Concord, Massachusetts, to attend the ceremony. Naka left UCLA as a sophomore but managed to obtain electrical engineering degrees from the University of Missouri (B.S. ’45), the University of Minnesota (M.S. ’47) and Harvard University (Ph.D. ’51). Naka went on to have an illustrious career as one of the nation’s foremost engineers, and his work on the U2 and Oxcart aircraft was  the precursor to stealth technology.

“‘To restore justice among the groves of academia’ — that is quite an admission of the difficult times we faced under presidential decree in the spring of 1942,” Naka said. “The U.S. government had dug a great, big hole into which we were thrust, and out of which we had to climb to make our way.”

The honorary degrees would not have existed had it not been for the efforts of the keynote speaker, California Assemblyman Warren Furutani (D-Long Beach), who wrote the legislative bill that made it possible to confer degrees upon those who were forced to leave postsecondary studies as a result of EO 9066.

“What we celebrate today … what we honor today … what we acknowledge today really is not a lesson in history alone,” said Furutani, whose parents met at the Rohwer internment camp in Arkansas. “It is not a stroll down the path to nostalgia. It’s a reality that lessons learned must be codified; lessons learned must be embraced. And if not, those problems and those mistakes will be made again.”

The audience was then treated to a performance by Yukai Daiko, a UCLA student taiko (drum) group, followed by the conferral of the honorary degrees.

Chancellor Block and UCLA Registrar Anita Cotter distributed the degrees while the names of the honorees were read by Professor Emeritus Don Nakanishi, chair of the UCLA Honorary Degree Task Force, and Professor Valerie Matsumoto of the UCLA departments of History and Asian American Studies.

In many cases, honorees who had died or who were too ill to attend were represented on stage by husbands, wives, sons, daughters, grandsons, granddaughters, nephews and nieces. The mood in the hall was lively as the announcement of each name drew loud and sustained applause. After the ceremony, attendees were invited to a reception at the Faculty Center.

Robert Nakazawa, still in his cap and gown, continued to snap pictures of his family after the ceremony was over. His four siblings had chosen him to represent their father, Masao Nakazawa. “I think my father would have been very, very proud,” he said. “It was a very difficult time for Japanese Americans. But the Japanese Americans turned out to be a very strong and very accomplished people of whom we are extremely proud — not only my father, but all the other honorees who are here today.”

One of those honorees was Shigeo Yuge — Tritia Toyota’s uncle. “He actually graduated in the Midwest because he got relocated from camp,” Toyota said. “He said to me, ‘This is not a big deal.’ And I said, ‘Of course, it’s a big deal!’ So it was kind of nice that he was here with my cousin and her husband. I wish that my aunt were still alive to see this. She would have loved it.” 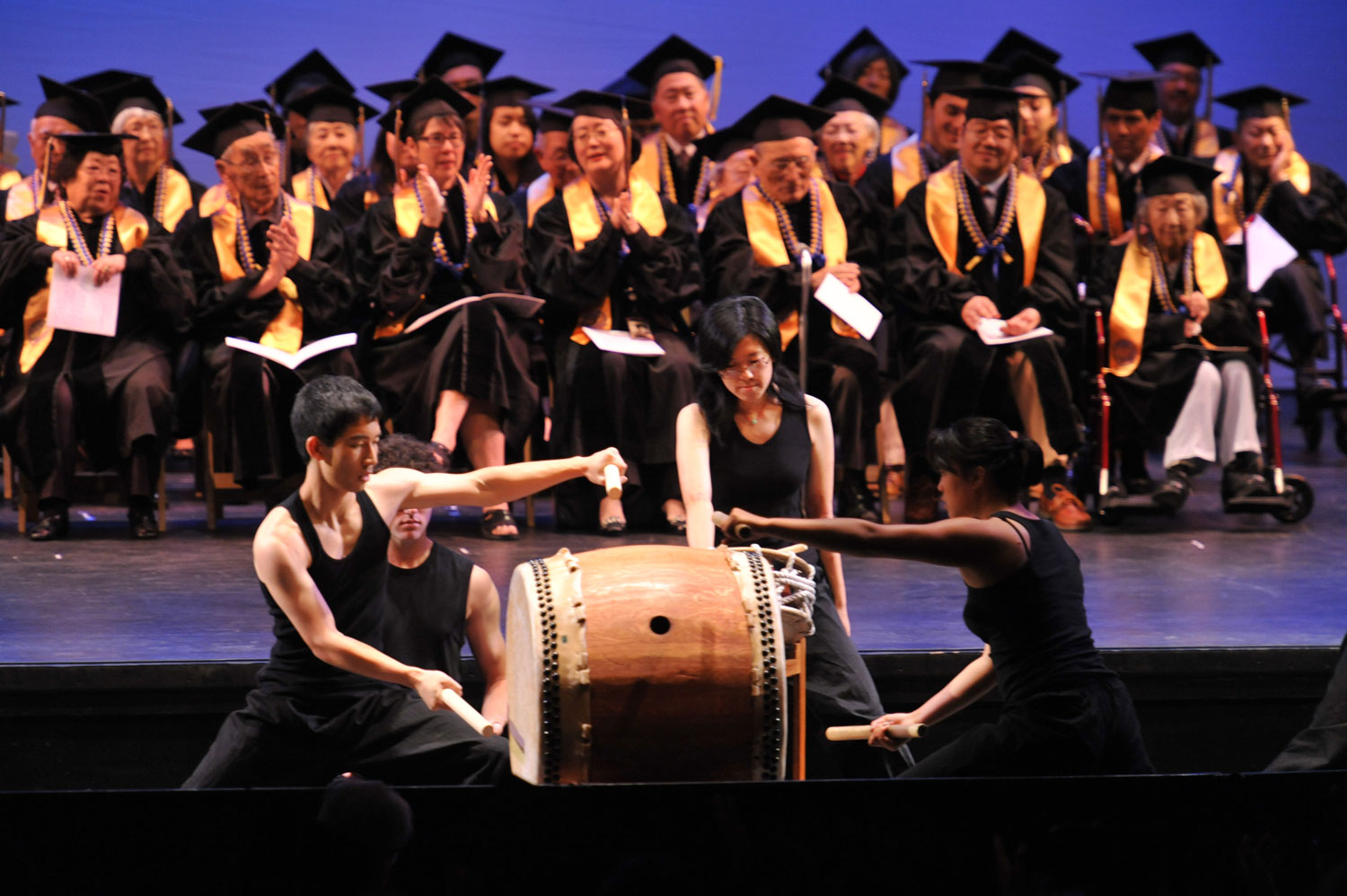 The honorary degree ceremony took about six months to plan, according to Don Nakanishi, who said that the hardest part was trying to locate all the former students. The UCLA Honorary Degree Task Force relied on different methods to reach as many people as possible, including disseminating press releases and flyers to churches and community groups.

“I think it was wise for us to hold this event today as opposed to June, because it would have been lost in all the different Commencement activities,” Nakanishi said. “Fittingly, it was held during UCLA Day, when alumni come back to campus. This was an appropriate group to welcome into the UCLA community.”

In a quiet corner of the Faculty Center patio, Masaye Nagao Nakamura, 86, was enjoying the day with her granddaughter, Jill Nakamura. The two had driven down from the Bay Area with other family members to attend the ceremony.

“I thought it was wonderful,” Masaye said. “You know, at my age, to have something like this happen to me is pretty special. I can tell my grandkids I got an honorary degree from UCLA.”

Jill added, “I graduated from UC Irvine in 2008, and she was there for me. So this is great that I get to be here for her now. I’m just so proud of her.”