During his last three years as an undergraduate, Cody Aros spent a lot of time asking strangers deeply personal questions.

As a volunteer intake coordinator at a free clinic in Menlo Park, California, Aros’ duties included asking the people seeking care about their interest in HIV testing. For a lot of people, asking strangers about their sexual histories would be a nightmare. But not Aros. With every interaction, he tried to create a safe space, in which people could share their histories and concerns without fearing judgment.

“There is an element of vulnerability in medicine that I found myself really drawn to,” Aros, now 28, said. “I was so struck by the people who were able to be open about something that is otherwise kept so private.”

Aros cherished the opportunities he had to ease others’ burdens of secrecy, because he knew firsthand how heavy they could be.

Growing up in Fullerton, California, as the son of a waitress and a construction worker, Aros knew he loved science. He knew he wanted to help people. And he knew he was gay. Unfortunately, through these formative years, he repeatedly received the message that his sexuality — at that point a closely guarded secret — would prove a hazard to his dreams of becoming a doctor and a scientist.

Now, as a seventh-year graduate student pursuing his M.D.-Ph.D. degree through the UCLA-Caltech Medical Scientist Training Program, Aros is living proof that those messages were wrong. Aros, who came out after graduating from Stanford, channels every aspect of his identity — his sexuality, his mixed-race heritage and his first-generation, low-income background — into making science and medicine accessible and inclusive for patients and practitioners alike. He is pursuing this mission in so many ways it’s hard to imagine how he gets any sleep.

As a graduate student seeking new treatments for lung cancer in the lab of Dr. Brigitte Gomperts, Aros is a mentor to three undergraduate students. As an alumnus of the Eli and Edythe Broad Center of Regenerative Medicine and Stem Cell Research’s Training Program, he’s a dedicated science communicator on a mission to make research accessible to the public. And as a fellow of the Yale Ciencia Academy for Career Development, Aros is working to show LGBTQ-identifying youth that they have a place in science, technology, engineering and math, or STEM, programs.

“I want to be a role model for young people who may just be coming to terms with their sexuality,” Aros said.

Aros is quick to acknowledge that he wouldn’t be where he is today without the mentors who encouraged and guided him. But not all of the guidance he’s received has been helpful.

“I had some teachers in both high school and college tell me that I should not come out in any professional setting because it would limit my career mobility,” Aros said.

Looking back, he doesn’t think these people intended to hurt him; he thinks they were being honest about what they saw as the harsh realities of the world he hoped to enter.

A 2015 nationwide survey of LGBTQ-identifying people in STEM careers found that more than 40% of respondents had not disclosed their LGBTQ identity to colleagues or students. And another study from 2014 found that nearly 70% of STEM faculty who are open about their LGBTQ status reported feeling uncomfortable and discriminated against in their departments.

In light of these statistics, Aros said he feels “extremely fortunate” to have ended up at the David Geffen School of Medicine at UCLA, the first academic setting in which he felt comfortable disclosing his sexuality to others.

Upon arriving at UCLA, Aros connected with LGBTQ-identifying professors, scientists and clinicians who helped him understand that his identity and his aspirations didn’t have to be mutually exclusive. The people he opened up to encouraged him to tell more people, including the principal investigator of the lab he joined during the first year of his doctoral studies, Dr. Brigitte Gomperts.

“Not only was Brigitte incredibly supportive and welcoming of me as a gay man, she made sure that whenever we had lab outings my partner was always invited,” Aros said. “Overall, she has been a great scientific mentor and a great personal cheerleader as well.”

The research work is personal 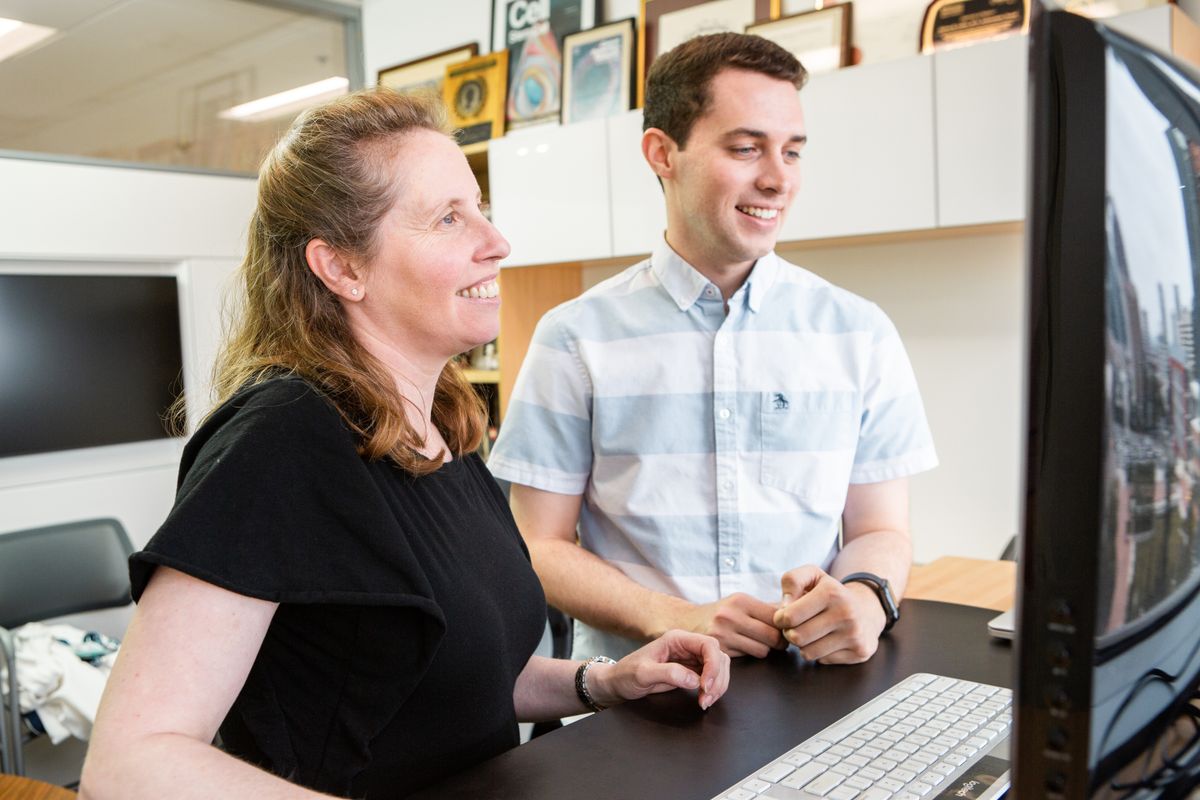 In Gomperts’ lab, Aros studies how lung stem cells, which regenerate lung tissue and respond to damage throughout a person’s life, are influenced by their environment. He aims to pinpoint the factors that drive lung stem cells to divide uncontrollably, which over time leads to cancer.

“Both of my mother’s grandparents passed away from lung cancer so I have some personal motivations for studying this disease,” Aros said.

Together, Aros, Gomperts and others in the lab are identifying drug candidates that could slow down the rapid division of lung stem cells.

For two years, Aros’ work in the Gomperts lab was funded by the Rose Hills Foundation Graduate Scholarship through the UCLA Broad Stem Cell Research Center’s Training Program, which provides graduate students and postdoctoral and clinical fellows with the training to translate basic science discoveries into treatments.

“The training program taught me how to communicate with non-scientists, which has become increasingly important to me,” Aros said. “Neither of my parents were afforded the opportunity to go to college, so learning how to share my work with them and others who are not experts in science has been incredibly valuable.”

In 2018, Aros was a finalist in UCLA’s Grad Slam, a campus-wide competition that showcases and awards the best 3-minute research presentations by graduate students.

Since joining Gomperts lab in October 2015, Aros has mentored two undergraduate students — both of whom are now planning to pursue medical degrees — and he recently took on a third.

One of these students, Carla Pantoja, decided to join the Gomperts lab after meeting Aros at a meet-and-greet for participants in UCLA’s NIH Biomedical Science Enrichment Program, which provides underrepresented minority students with training and support toward biomedical research careers.

“Even though I knew absolutely nothing about the research Cody was presenting — Wnt signaling and how it pertains to lung repair and regeneration — he was so excited I couldn’t help but feel excited about it too,” said Pantoja, a 21-year-old senior studying molecular, cell and developmental biology.

Pantoja said she knew right then that Aros would be a great mentor. After two years, she’s happy to report that her instincts were spot-on.

“Cody’s enthusiastic and patient mentorship shaped me into the scientist I am today,” she said. “But we don’t just talk about science. He’s someone I can binge watch TV shows with, too.” 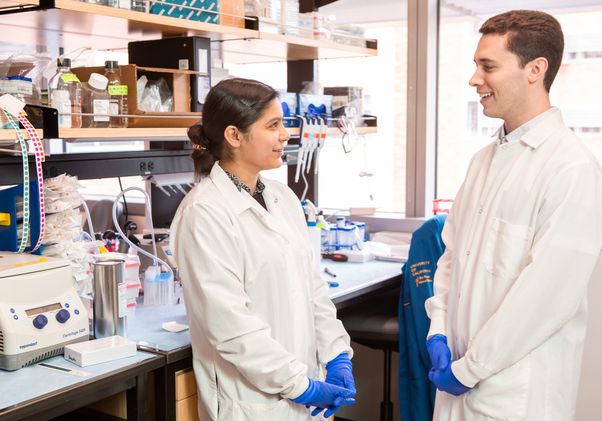 This past year, Pantoja was awarded a Goldwater Scholarship – one of the most prestigious research scholarships available to undergraduates in the United States. Aros, who was a finalist when he was an undergraduate but didn’t ultimately receive this scholarship, encouraged Pantoja to apply and wrote her a glowing letter of recommendation.

“Watching Carla apply for and get scholarships that I didn’t get myself has been nothing short of heartwarming,” Aros said.

Pantoja said she plans on applying to M.D.-Ph.D. programs in spring 2020. Around that same time, Aros will earn his doctorate in molecular biology and return to medical school for two more years.

From there, he plans to pursue a physician-scientist track residency program that will allow him to continue his stem cell biology research while seeing patients in the clinic.

“I expect that he will go on to lead his own research group and to answer some really important questions in the field of oncology that will have a huge impact on patients,” Gomperts said.

As excited as Aros is about research, he could never give up treating people who need help, which is no surprise to Gomperts, who points out that Aros’ background is a key part of what makes him so relatable to so many people.

“He has an innate ability to put himself in others’ positions,” Gomperts said, “and to really understand where they’re coming from.”

When he’s not in the lab or the clinic, Aros said he’ll dedicate time to advocacy and mentorship, with a special focus on LGBTQ youth. He’s starting that work this year, through his involvement with the UCLA-founded group Queers in STEM and through an outreach program he’s launching as part of his Yale Ciencia fellowship.

This November, Aros will bring LGBTQ-identifying UCLA students to his old high school for a Q&A on college applications and pursuing higher education. While there, he’ll meet with the school’s Gender and Sexuality Alliance to plan programs that will match the group’s members with college and graduate student mentors. He’ll also solidify plans for training the high school’s educators on how to create inclusive spaces for students who identify as LGBTQ.

It’s the kind of program Aros said he could have really benefitted from all those years ago.

“I feel fortunate to be living in a time when the concept of inclusion is growing and I think the time is now to empower youth to pursue STEM fields,” Aros said. “I hope I can help these students and their teachers recognize that there is merit in having diverse perspectives – not only from a scientific standpoint, but also different races and ethnicities, sexual and gender identities, and socioeconomic backgrounds. We all grow and learn from one another.”