Kids may recognize Ellie Goulding’s voice more quickly than Ella Fitzgerald’s, and they may know John Legend’s work better than John Coltrane’s, but this is slowly changing for thousands of elementary, middle and high school students in Los Angeles as an accomplished group of UCLA master’s students introduce them to jazz.

“People around the world know these names, but for some reason those living in America — where these musical greats, and many others, are from — don’t,” Daniel Seeff, West Coast director of the Thelonious Monk Institute of Jazz Performance at UCLA, told a group of several hundred teens during a recent workshop at North Hollywood High School.

The Monk Institute works to promote and preserve jazz, and educate and inspire future generations of jazz musicians and fans. On that particular day, seven UCLA students, who are also Monk Institute fellows, took the stage to speak about jazz history and to perform some classic and original songs.

The UCLA students are part of the Monk Institute’s graduate level college program, which joined the UCLA Herb Alpert School of Music in 2012. The institute has previously been housed at Boston’s New England Conservatory of Music, the University of Southern California and Loyola University in New Orleans.

“Coming to UCLA has been incredible,” said Seeff, from his office in the Schoenberg Music Building. “We’re embraced and understood here like never before.” 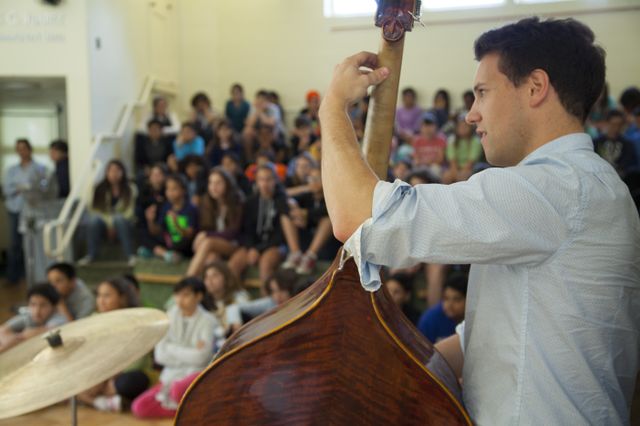 John Vande Wege/UCLA
Bass player Alex Boneham performs during a clinic at the UCLA Lab School put on by the musicians in the Thelonious Monk Institute of Jazz Performance.

Thelonious Monk actively and enthusiastically mentored musicians throughout the 1950s and 60s, and in this spirit the Monk Institute’s college program is rooted in this. Jazz legends like Herbie Hancock, Wayne Shorter, Herb Alpert, Kenny Burrell and Jimmy Heath, are among those who have worked with the hand-picked group of some of the best young jazz artists in the world who have come to UCLA as Monk Institute fellows.

And to carry on Monk’s legacy, the fellows share their growing knowledge and expertise by speaking to thousands of students at local elementary, middle and high schools. Some of this students also receive instruction from the fellows.

“Our fellows serve as conduits of information between the most prolific names in jazz and the rising future stars of jazz,” Seeff said.

Bringing jazz to the community

This is done on a grand scale through “Jazz in the Classroom,” a partnership between the Monk Institute and the Los Angeles Unified School District that has been active for nearly two decades. For some LAUSD students, this offers an introduction to jazz; for others, the program’s performance-based jazz curriculum allows them to elevate their musicianship. Each year the institute provides music directors in local schools with two 90-minute jazz pedagogy classes led by J.B. Dyas, the Monk Institute’s vice president of education and curriculum development. 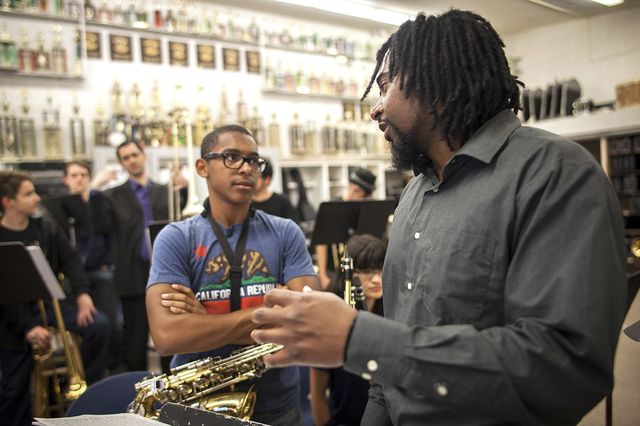 The institute also helps school jazz ensembles get gigs performing at public and private events and provides free one-on-one music lessons for young aspiring musicians throughout the academic year. The LAUSD program culminates with an annual concert held in the spring featuring jazz combos from each participating school, as well as L.A.’s All-City Big Band.

“The biggest benefit is that it shows our students how to look at the world through an artistic lens, something that is not emphasized enough, in my opinion,” said Anthony White, performing arts coordinator for LAUSD’s Beyond the Bell after-school program and director of the All-City Band. “It gives them a greater sense of hope as to what the future can bring for them as artists.”

Attracting talented musicians from around the world

The Monk Institute accepts new fellows every two years. Those who are accepted receive full scholarships, free housing and a stipend. Members of the current cohort, who hail from Israel, Australia and the United States, are the 10th group of students to be accepted into the Monk Institute college program.

At UCLA, they have a schedule of music theory, technique, composition and performance, coupled with master classes and instruction in the business of music. In addition, the fellows practice as an ensemble three hours per day and perform at myriad venues, both on-campus and off.

The fellows host a monthly jam session at the Blue Whale jazz bar and participate in free public master classes at UCLA’s Popper Theater. And they recently returned from gigs in Morocco and France, where they participated in events recognizing International Jazz Month and International Jazz Day.

“To be working with amazing young musicians and studying with the best living jazz legends is incredible,” said Michael Mayo, who holds a bachelor’s degree in jazz vocal performance from the New England Conservatory of Music and is just the third vocalist to be accepted into the Monk program.

Mayo, who grew up in Van Nuys, California, has seen how the institute can inspire students. Two teachers at his high school, the Los Angeles County High School for the Arts (LACSHA), were Monk Institute alumni. And when Gretchen Parlato, a UCLA alumna who later went on to become the Monk Institute’s first college program vocalist and a Grammy nominee, visited LACSHA as part of the Institute’s musical education outreach efforts, Mayo became enamored with the idea of being a professional vocalist.

Mayo also appreciates the practical teaching experience he’s gaining by working with aspiring young musicians and teaching children about the evolution of jazz.

“Jazz is, aside from being one of the most American art forms that there is, jazz is an allegory to life,” said Mayo. “There’s so much communication that goes on, and you have to listen and be actively appreciative of what’s going on in the moment and what everyone has to say. I think that that’s one of the things that we can teach kids: to always be listening and always take other people’s opinions as valid, but to not be afraid to share theirs as well.”