A Colorado native, Allison Carruth grew up enjoying free-flowing alpine rivers fed by snow melt. So the UCLA associate professor of English is not an obvious advocate for the largely channelized Los Angeles River that is fed by urban run-off, treated wastewater and other less pristine sources. Yet Carruth fell under its spell shortly after moving to L.A. to join the UCLA English faculty two years ago. Today, she is helping to lead a massive effort to draw the public to the river, beginning this weekend in the northeast Los Angeles community of Elysian Valley known as Frogtown. The event will be part of the neighborhood's annual art walk.

“Play the LA River,” which launches at 4 p.m. Saturday at the newly inaugurated Marsh Park II, is a yearlong project designed to inspire the public to explore the waterway from its headwaters in Canoga Park to its mouth in Long Beach. The project, which Carruth helped plan and attract funding for, comes at a time of mounting interest in the river. In light of the federal government’s support announced in May of a $1 billion plan to revitalize extensively an 11-mile stretch from near Griffith Park to downtown Los Angeles, city officials have begun acquiring property across the river from Saturday’s festivities. A 51-mile greenway and bike path alongside the river are envisioned to become a reality by the end of the decade. Carruth spoke to the UCLA Newsroom about “Play the LA River” and revitalization plans.

What affect did your first encounter with the L.A. River have on you?
What I most remember was how long we spent not getting to the river and trying to navigate the parking lots, private property lines and studios in that section opposite the (Los Angeles) zoo and the 5 (freeway). When we finally got to the banks of the river, I had this sense of the mightiness of the concrete and the meekness of the flow, and the juxtaposition was powerful for me.  I was hooked from the beginning.

How is river revitalization in the domain of an English professor?
As a scholar, I’m interested in how the arts shape environmental movements and how they might do so more powerfully in the future. Artists and writers have spearheaded much of the activism, policy and civic engagement that have been part of the story of the river since the 1980s — starting with the poet, journalist and activist Lewis MacAdams and the Friends of the Los Angeles River. I think that’s because the river required, above all, a transformation of attitudes. The most powerful cultural images of the L.A. River that we have are images from Hollywood that amplify the view that it’s not a river at all — that it’s a different kind of space — a concrete channel with aliens or drag races rather than a natural habitat with dragonflies and egrets. Reenvisioning the river has required and invited a powerful response from artists, and artists have really stepped up to that challenge.

What is Project 51?
We’re a river-loving collective of artists, scholars and designers who have teamed up with dozens of partners and sponsors, including UCLA. The cofounders of Project 51 include, in addition to myself, urban planner John Arroyo, photographer and designer Barron Bixler, artist and educator Amanda Evans, UC Riverside historian Catherine Gudis and Jenny Price, a researcher at the UCLA Center for the Study of Women. It’s a collaboration like I’ve never been a part of before, and it’s kind of humbling. 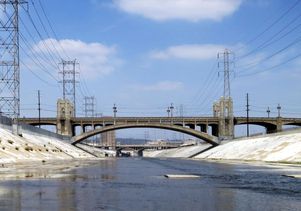 What do you have in mind?
“Play the LA River” is a collaborative public art and community engagement project that spans the entire 51-mile length of the Los Angeles River. We have created a collectible deck of cards featuring 52 sites in four geographical stretches of the river (or suits): the Valley, the Glendale Narrows, downtown and the southern reaches of the river. The card deck also includes four wild cards that point to sites off the river but are river-related. These cards feature artwork by local artists, including UCLA (Chicana and Chicano studies) professor Judy Baca. The card deck, which we’ll be unveiling at the launch event on Saturday (and which will also be available through UCLA’s English Department and through the project’s interactive website), acts as a guide to the often invisible river that runs through the heart of the city. We hope people will use them to explore the river and join in the many forms of play the project hopes to inspire. In addition, we’ll be serving as a kind of clearinghouse online and through social media for events — a few organized by us, but most organized by others — along the river over the next year.

What is Frogtown? And why is “Play the LA River” launching there?
Frogtown is the nickname for the small, tightly knit neighborhood of Elysian Valley, which is sandwiched between the 5 and the river. The name is an invocation of the red-legged frogs that used to venture out of the river and into the neighborhood on hot days. Lots of artist studios have been popping up there lately, and there are a number of community-created pocket parks along the river. Part of the river in this stretch has a soft bottom, so it’s relatively lush and green, while the other part is concrete, making Frogtown a hinge between these two personalities of the L.A. River.

What will go on at Saturday’s launch?
The launch is a public festival, but it’s also a prototype to show what’s possible on the L.A. River and to inspire others to pick up the ball and run with it. We’ll have game-playing, ranging from lawn games like bocce ball and bean-bag toss to giant Twister. We’ll have performance art, a community dance class and poetry reading. There also will be opportunities for interactive engagement with L.A. River ecology experts from the Natural History Museum of Los Angeles.

But isn’t the river a dangerous place?
Of course, there’s skepticism when you invite Angelenos to explore, enjoy and reimagine the L.A. River. And we all need to exercise caution and common sense when visiting the river, especially during and after rains. But since I moved to L.A. and to UCLA in 2012, the river has enchanted me, and I’ve discovered that there already are so many communities who have invested decades in making the river a place for all of us to enjoy. Many communities already live and play along its banks. Part of what “Play the LA River” has done is scout out and identify sites for all of us to explore and reimagine.