Rafer Johnson, a UCLA alumnus and two-time Olympic medalist whose work helping to found the Special Olympics and advance racial and social justice transcended his athletic achievements, died today at his home in Sherman Oaks. He was 86.

Following a storied athletic career that culminated with a gold medal in the Olympic decathlon in 1960, Johnson dedicated his life to public service, a mission he carried out with a strength and grace he said was shaped in part by his experiences at UCLA.

“That commitment to helping others get over the hurdles in life — be they racial discrimination or developmental disabilities — was clearly a driving force for Rafer,” Chancellor Gene Block said in a message to the UCLA community. “He reminds us that everyone needs the help of others at times and that all of us can extend our help to others as well. Helping those who need it may be the truest Bruin value of all.”

In 2016, Block presented Johnson with the UCLA Medal, UCLA’s highest honor, in recognition of his decades of leadership in the Special Olympics and unwavering efforts supporting equality for all.

“At the same time he was struggling to break down the racial barriers he faced, Rafer Johnson selflessly dedicated himself to helping others, specifically joining the fight by those with intellectual disabilities against the stigmatization they too often face,” Block said while bestowing the medal to Johnson during a special dinner held in his honor. “His commitment and untiring leadership to achieve equality and access for everyone is an inspiration to us all.” 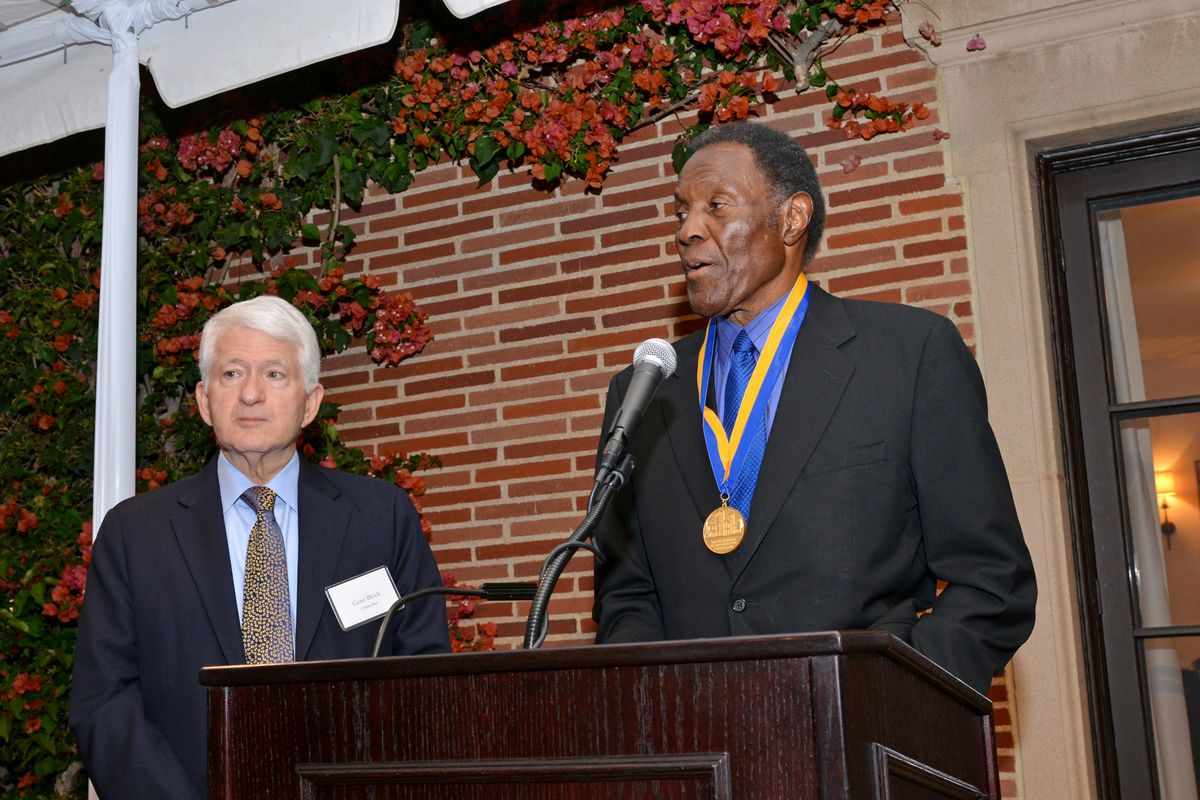 “We are devastated by the news of the passing of Rafer Johnson,” UCLA Athletics shared. “He will forever be remembered not only for his historic athletic achievements, but also for his heart and for the tremendous example he has set for all Bruins. Today, we mourn the loss of a legend.”

Johnson was born Aug. 18, 1934, in Hillsboro, Texas, and grew up in an impoverished neighborhood marked by segregation and discrimination. In 1944, his family moved to Kingsburg, California, some 200 miles north of Los Angeles. Though they were for a time the only Black family in the town, Johnson earned the respect of his classmates and was voted class president in middle school and high school.Johnson chose to attend UCLA in part because of the campus’s history as a college for athletes and students of all races.

“It’s not just because of UCLA’s long history with athletes of color, like Jackie Robinson and Woody Strode,” Johnson said. “While I was touring campus, I saw pictures of the former class presidents, and one of them was a Black student. I didn’t see anything like that at any other school.”

As an undergraduate, Johnson was a two-sport athlete at UCLA, competing in track and field and playing basketball for another legendary Bruin, John Wooden, an experience Johnson said in a 2005 interview had a major influence on his life.

“Many of the things that I’ve accomplished beyond my years at UCLA, including my relationship with my family and friends and the fact that I’m very much interested in giving back to the community, have a great deal to do with what I learned from coach Wooden,” Johnson said. 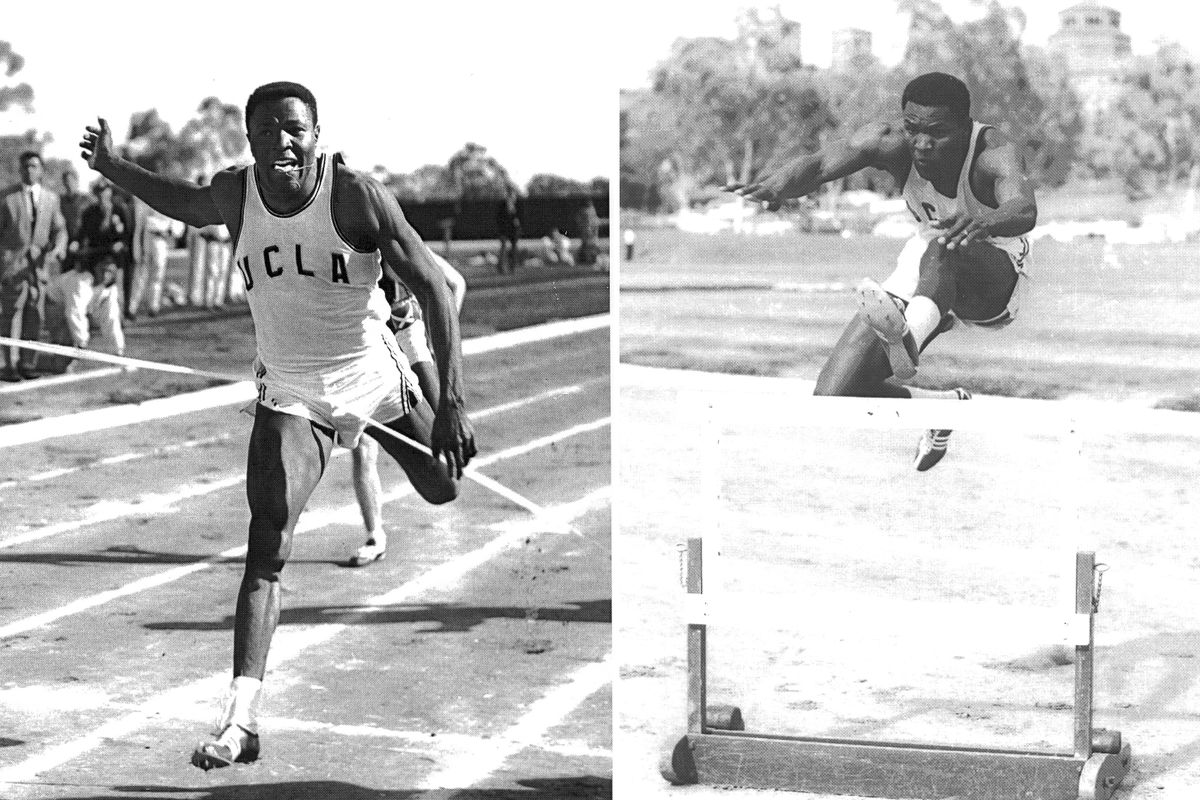 UCLA
Rafer Johnson in his UCLA days. The 110 meter hurdles was his best decathlon event.

Johnson competed in his first Olympics Games while still a UCLA student, winning a silver medal in the decathlon, in 1956, in Melbourne, Australia. During his undergraduate years, Johnson also served as UCLA’s student body president.

In 1960, a year after graduating, he returned to the Olympics, this time in Rome, to capture gold in the decathlon, besting his fellow Bruin and good friend C.K. Yang, who took the silver. That year, Johnson captained the U.S. Olympic team and was the first African American to carry the American flag during the opening ceremonies. In 1984, he lit the Olympic flame to open the Los Angeles Olympic Games.

While Johnson first gained international renown as an athlete, it was after his retirement from competitive sports in 1960 that he would go on to make what he saw as his most important contributions.

After spending a short time as a television commentator and an actor, Johnson began working with the NAACP and the Urban League to combat housing discrimination and champion voter registration.

In the early 1960s, he became friends with the Kennedy family and was one of the people Eunice Kennedy Shriver turned to for input when she was creating the Special Olympics, which was initially intended as a day camp for people with intellectual disabilities. At that time, families often hid relatives with disabilities.

“Being a person of color, it was very clear to me that sometimes decisions and opinions are falsely made about people based upon their color or position in life,” Johnson said.

Inspired by President John F. Kennedy’s call to “ask what you can do for your country,” Johnson worked with the Peace Corps and later became a friend and adviser to Robert Kennedy during his 1968 run for president. Johnson was working for Kennedy’s campaign and was present when Kennedy was shot at the Ambassador Hotel in Los Angeles on June 5, 1968. Johnson helped subdue the gunman, Sirhan Sirhan, and turned the gun over to police. Kennedy died the following day.

Distraught, Johnson grieved until Shriver convinced him to honor the slain leader by helping establish a western branch of the Special Olympics.

To Johnson, his alma mater seemed the natural place to start.

With Johnson heavily involved, UCLA has hosted more than 20 Special Olympics Games, most recently in 2015.

Patrick McClenahan, president and CEO of the 2015 Special Olympics World Games, described Johnson as a “national treasure” when working with him during the 2015 games at UCLA.

“Imagine the number of lives that Rafer Johnson has touched,” McClenahan said. “The perceptions he has changed towards people with intellectual disabilities has been remarkable.”

Johnson graduated from UCLA in 1959 with a bachelor’s degree in physical education. His family’s Bruin connections run deep. His wife, Betsy, earned her B.A. in education at UCLA. His daughter Jennifer and son Joshua earned UCLA degrees and competed in sports while students. Jennifer played volleyball, both for the Bruins and the United States in the Olympics, and Josh competed for the men’s track and field team. Jennifer is now the associate coach of UCLA’s two-time NCAA champion beach volleyball team.

Fifteen years ago, Johnson spoke at UCLA’s Parents’ Weekend, sharing with other parents of students his insights into the campus that became a home.

“When I was first considering UCLA as a high school senior,” he said, “I was impressed by the accomplishments of the men and women who had gone there, including people like Jackie Robinson and Ralph Bunche. As a student, then later as a parent, I continued to be impressed by what UCLA encourages people to achieve. This leads me to want to give back to UCLA.”

At the age of 80, Johnson was still serving as a special assistant to then-Athletic Director Dan Guerrero. 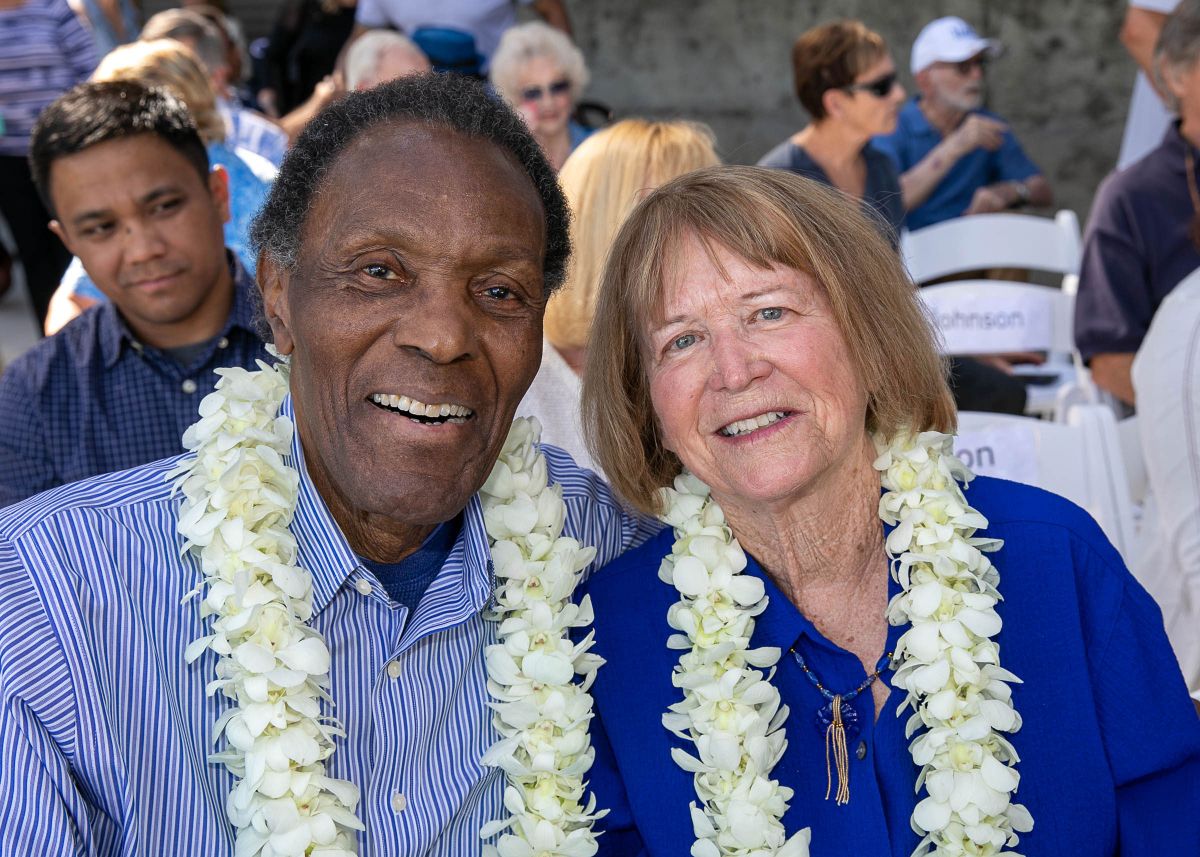 Reed Hutchinson/UCLA
Rafer and Betsy Johnson at the dedication of the Drake Stadium track in their honor.

To honor the legacy of both Rafer and Betsy, in October 2019, UCLA named the track at Drake Stadium the Betsy and Rafer Johnson Track. At the ceremony, Block said that UCLA’s 100th anniversary was a time to reflect on who had shaped this world-class institution, and that Rafer and Betsy Johnson — both Bruins — were high on the list.

“The Johnsons are two of the most selfless individuals I have met,” Block said. “Betsy and Rafer bleed blue and gold. We couldn’t think of two better UCLA ambassadors.”

Those wishing to make a donation in Rafer Johnson’s honor can do so through:

The Play Equity Foundation’s Rafer Johnson Impact Fund is dedicated to providing support to organizations serving adaptive athletes and those with intellectual disabilities.

Rafer Johnson: A timeline of honors