Ask UCLA assistant researcher Melanie Barboni about volcanic eruptions and methods for assessing hazardous volcanic activity, and she might give you some scientific details about the Soufriére volcanic reservoir on the Caribbean island of Saint Lucia that she has studied. Ask her about the moon, and she’ll tell you how she was on the team that determined its age.

In and outside the Court of Sciences, however, Barboni is known for a subject that has nothing to do with geology or volcanoes: hummingbirds — specifically a wing-flapping, darting, squeaking colony of 200-plus birds that make their home around the campus office of the “hummingbird whisperer,” as Barboni is sometimes called.

Every weekday, Barboni welcomes clouds of these “fairy” birds to her office window with nectar she mixes from large bags of sugar and water. In a frenzy and flash of iridescent greens, blues, reds and purples, the birds flit around four 80-ounce feeders that hang outside the windows of her ground-level office. If she puts her hand on the rim of a feeder, they will perch there in fond recognition of the human who feeds them.

If she doesn’t feed them in a timely manner, the miffed hummingbirds will fly into her office to “yell at me. … They are so demanding, but they know I will give them everything,” she said with a smile. 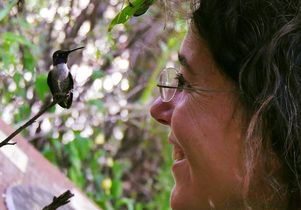 The strong bond these birds have developed with her over two years is mutually binding. So entranced is this scientist with hummingbirds that “I cannot go to a place where they are not there,” said Barboni, who was born and raised in Switzerland where hummingbirds are nonexistent. “This is cheesy, but I have seen them help people. They make my life happy. Having a crappy day? Who cares — there are hummingbirds around,” she said. “Having a good day? Hummingbirds make it better.

“They are just so cute, and so smart! They remember you. They get to know you, and then they interact with you,” said Barboni, who talks to the birds that sometimes fly into her office and recognizes at least 50 by names she has given them. Some of the bolder hummingbirds even allow her to hold them, stroke their feathers and see their nests. Her affection for the birds has captivated her colleagues in the Department of Earth, Planetary and Space Sciences; they have helped create an unofficial “Hummingbird Alley” by putting out other feeders.

As a bird enthusiast growing up in Switzerland, she had always admired these colorful creatures from afar — but in books. She believed them to be magical fairies because they were so elusive and so beautiful.

“My dearest dream as a child was to see hummingbirds,” recalled Barboni in a departmental newsletter. “Imagine my joy when I found out that my next job assignment would bring me to Los Angeles, where hummingbirds live year-round.”

After completing a postdoctoral fellowship in geology at Princeton, she came to UCLA in June 2014 on a second fellowship and wasted no time on her first day to install a feeder outside her office window — and she waited.

Soon a tiny female Allen’s hummingbird hovered outside her window and looked her straight in the eye. “I was thrilled beyond belief, and it was love at first sight,” she recalled of that moment.

She didn’t really expect an answer when she asked the bird, “What’s your name?” But when the bird squeaked loudly in response, “’Squeak’ she became,“ Barboni said. “I had just met my first friend at UCLA. I couldn’t say I tamed her; actually, what happened is she tamed me.”

Soon after, Squeak was perching on Barboni’s finger and feeding out of her hand. These days, the bird flies into her office for an evening visit and falls asleep standing on the researcher’s computer monitor. “That is where she spends her nights when it is cold or windy outside,” Barboni explained.

When Barboni discovered Squeak one day sitting on two tiny eggs in a nest in a tree in front of the window, the hummingbird and her offspring became “a first-rate attraction in the department,” said researcher, who documented their births and upbringing with day-to-day photos and videos. 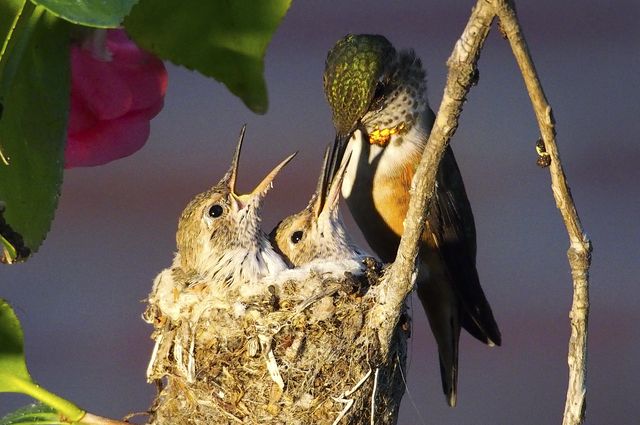 Barboni has become so protective of the birds that she has stopped campus tree trimmers from disturbing them during their nesting season.

The birds’ real foe, however, is climate change, she said. They’re at high risk of losing their habitat, a subject on which Barboni has given public talks. She is also working with associate professor Aradhna Tripati and the UCLA Institute of the Environment and Sustainability to find ways to better protect the birds. Barboni and UCLA Chief Sustainability Officer Nurit Katz are also collaborating on the idea of establishing a special garden at UCLA for the birds and other pollinators.

“They are, in every aspect, remarkable. They are tiny but fierce. They have so much personality, an amazing metabolism,” Barboni said of the birds that drink 8 to 10 times their weight in nectar daily. “They are Mother Nature’s best creation. … She was trying to make one tiny perfect jewel, and I think she got it perfectly right.”