With an office full of antique projectors known as “magic lanterns” and a conviction to retell media history, Erkki Huhtamo has pioneered the field of media archaeology, compelling us to think about the cultural history of 21st century media through the machines that were the precursors to today’s digital cams and movie projectors.

Having begun this quest more than 20 years ago in his native Finland, Huhtamo, a professor of design media arts as well as film, television and digital media, has sought not only to record the history of media through his writings, art and exhibitions, but to entertain modern-day audiences with productions using these antique machines.

From the 17th to the 19th century, magic lantern shows were the principal medium for watching projected images. Long before movie theaters, magic lantern projectors were used to present hand-painted glass slides, accompanied by performances that were sometimes reminiscent of shadow puppetry. Such projections were also used as a teaching tool in the academic world as well as for private entertainment in the home. Huhtamo combines these artistic and academic purposes in his magic lantern performances, giving his spectators an opportunity to relive a visual experience that has long since vanished. 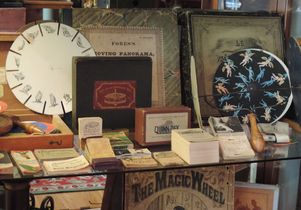 Lantern slides are not “cheesy old pieces of film,” he said, but elaborate miniature paintings with great detail and animation mechanisms. They were meant to capture the viewer's imagination with scenes that might have come from arctic voyages or dreamscapes. The quality of the craftsmanship comes through in the projections and exists in many different styles, demonstrating the sophistication of this art form — despite its antiquity.

Unfortunately, the history of this art form has been lost, Huhtamo maintained, eclipsed by the digital era of smartphones and big-screen TVs. In fact, so dominant has digital media become in the world of entertainment that the average media spectator often no longer seeks alternative media experiences, particularly from the past, said the professor, who holds a joint appointment in the schools of  the Arts and Architecture and Theater, Film and Television.

If we don’t look back and try to understand how audiences were once entertained with these devices, he maintained, we’ll lose an opportunity to be fascinated by an art form that still has much to give. Enjoying a magic lantern show like those spectators saw hundreds of years ago can result in a “renewal of perception,” he said.

“I have always been searching for alternative ways to make my ideas visible and audible,” said Huhtamo, who has a large array of magic lanterns and other antique optical devices in his collection.

To reawaken an interest in magic lanterns in Los Angeles, he performed a show in 2012 entitled “Professor Huhtamo’s Daring Adventures,” at the Velaslavasay Panorama, a theater in downtown Los Angeles. Musicians and foley sound artists accompanied the spectacle for a full house of enthusiastic spectators. He also exhibited a part of his magic lantern collection in 2009 in the UCLA Arts Library and at the UCLA Hammer Museum.

After years of sharing his work, Huhtamo has gained an international audience for his ideas. His work creates parallels between past and present, teasing them to explain each other. In his “meta-magic lantern shows,” Huhtamo’s goal is not to simply recreate an original magic lantern show, but to add a modern commentary over the show’s original style and technology.

“It's interesting to reconstruct something we call history, although we can never recreate it exactly,” he noted, since “we are situated in the present.”

In 2013, Professor Huhtamo published a comprehensive archaeological account of the formation of media culture by focusing on another little known media form, the moving panorama. “Illusions in Motion: Media Archaeology of the Moving Panorama and Related Spectacles” (MIT Press, 2013), explores media forms that were once very popular but fell into oblivion.

“The goal [of my research] is to provide tools for understanding culture and life,” he said. “I do not give people fully furnished answers … I give them tools to investigate the past and present. This is the most valuable thing media archeology can provide. It’s a way of thinking and approaching media phenomena in our lives.”

To see photos of the Huhtamo Collection and Archive of Media Archaeology, go here. You can also watch a video clip from the show, "Storage Wars," when Huhtamo was asked to appraise an old magic lantern and set of slides that were found in a storage locker.