Watch a clip of UCLA professor Jennifer Steinkamp’s video installation that’s designed to set visitors at ease as they enter the courthouse in Long Beach.

As you enter the cavernous lobby of the Gov. George Deukmejian Courthouse in Long Beach, a large colorful feather appears on the silver mesh LED screen 30 feet overhead. The feather sways back and forth as it gently descends, stirred by an unfelt breeze. Then another feather appears and another and still more until the screen fills with a swirl of neon pinks, oranges, greens, blues and yellows that appear and fade in a hypnotic dance.

If that’s not what you’d expect when you enter a courthouse, then you’ve reacted just as the artist, UCLA Design Media Arts professor Jennifer Steinkamp, intended.

“I think it surprises,” Steinkamp said. And whether the people entering the courthouse are defendants, witnesses, lawyers, judges or family members, she said that she hopes her video installation “Murmuration” makes them feel better. “You don’t want people feeling miserable. Their whole life is about to change. It is a peculiar challenge to make something in that context, where somebody’s already under a lot of stress.”

Steinkamp’s 26-by-24-foot video installation so artfully offers serenity in a fundamentally tense and adversarial setting that she recently won a national award for best public art. “Murmuration” was among 37 award winners selected as the year's best from 342 public artworks across North America by the Americans for the Arts, a nonprofit group that lobbies for government funding for the arts and assists the nonprofit arts sector nationwide. “Murmuration” was one of only six award winners unanimously favored by the three-judge panel, which consisted of two artists and a public art expert.

“The piece is transporting. It’s evanescent,” said judge Ralph Hemrick in a transcript of the jurors’ notes. “This is first-class, high technology in the service of visual poetry.” 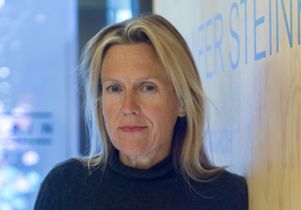 Steinkamp was invited in 2011 to propose an art concept for the courthouse by Mark Pally, organizer of the Glow Festival in Santa Monica, who also was the art consultant for the building. Once she was selected for the project, she started ruminating about what happens in courthouses and what decisions are made there, which led to her thinking about what artists do and the decisions they make.

“So at a courthouse … huge life-and-death decisions or life-changing decisions are being made,” Steinkamp said. “Artists are making thousands of minute decisions that affect the [final work]. I became curious about decision-making intuition, how artists work and how courthouses function.”

In a court trial as in art, individual decisions, when taken as a whole, have a greater impact. Seeing those parallels, led Steinkamp to make the decisions that resulted in “Murmuration,” which takes its name from the scientific concept that describes how a flock of hundreds of birds moves as one form.

“The piece perhaps didn’t become about intuition necessarily, but it was fascinating,” Steinkamp said. “It really affected my thinking and understanding of how artists know things.”

Steinkamp was also inspired by Egyptian mythology. The ancient Egyptians believed that after you die, the goddess of justice, Ma’at, removed an ostrich feather from her headdress and weighed your heart against it, she said. If the scale was balanced, you were granted eternal life. If your heart was heavier than the feather (because your heart was weighed down by sins committed over a lifetime), you were condemned to hell.

Once she had a concept, Steinkamp had to obtain approval from the art committee overseeing the courthouse construction, including a judge. Fortunately, the judge liked it.

Steinkamp grew up in Minnesota and, even as a kid, was drawn to art. “In first grade I made the best trees,” she said. “Maybe it’s from being trapped in Minnesota where it’s cold. You’re inside a lot bored. You gotta do something.”

She started veering toward creating art on the computer while a student at the Art Center College of Design in Pasadena.

“I saw that you could make things that no one had ever seen before,” said Steinkamp, who teaches classes in animation and 3-D modeling in the UCLA Department of Design Media Arts. “In addition, new media lets you think about traditional media from another perspective. You can rethink painting. You can rethink photography. You can rethink sculpture. Things that are second nature and sometimes taken for granted need to be reconsidered when working with new media. For example the point of view in photography needs to be constructed in a 3-D model, or the expressiveness of a paint stroke might be adjusted with a random variable.” 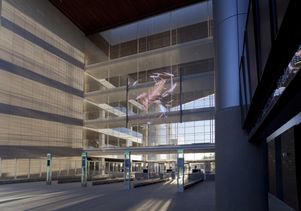 Javier Bosques
Steinkamp hopes the swirling colorful feathers will ease visitors as they enter the courthouse in Long Beach, California.

To create the feathers and motion that compose “Murmurations,” Steinkamp used the computer animation software Maya. The screen was assembled in Germany, and then the building’s contractors installed the stainless steel mesh (a material called GKD Mediamesh) that had LEDs woven into it in the lobby of the courthouse, which opened in September 2013.

This algorithm-based dance of moving feathers was Steinkamp’s reinterpretation of the traditional courthouse frieze, which are typically reliefs of the blindfolded Lady Justice holding scales and noble animals like horses or eagles.

Steinkamp said that she similarly pushes her students to reimagine traditional concepts.

“I probably get more enthusiastic when students come up with projects that maybe I’ve never thought about before and not aimed at getting a blah-blah-blah job,” said Steinkamp, who has a piece in a show opening at the ACME Gallery on Wilshire Boulevard this month.

Angelenos can also view Steinkamp’s work at the UCLA Hammer Museum, where a tree she designed is projected in the lobby space off of the Ammo at the Hammer restaurant; Cedars-Sinai Medical Center; Staples Center; and along the Hollywood Walk of Fame on Vine Street where eight 20-foot columns rise, each featuring an LED floral pattern. She also has exhibited throughout the world, and her work is in numerous public collections, including the Corcoran Gallery of Art in Washington, D.C., L.A.’s Museum of Contemporary Art, the Experience Music Project in Seattle and the Istanbul Modern in Turkey.

Although she’s exhibited at museums around the world, Steinkamp said that she sees a special role for public art. Her favorite public art piece is Anish Kapoor’s “Cloud Gate,” which resembles a giant, mirrored bean, in Chicago.

“That piece is extraordinary. Maybe it’s just the way it reflects the cityscape so magically, and it’s so beautiful,” Steinkamp said. “It creates a tourist sensation. And I think that’s great that this abstract work that maybe really doesn’t have a big purpose touches people. Hopefully it gets you to really look at things, and gets you out of your stuck self and makes you think. Art can do that.”