This year, 105 UCLA scholars received Ph.D.s from the School of the Arts and Architecture, the Humanities Division of the UCLA College, the Herb Alpert School of Music and the School of Theater, Film and Television.

“We are extremely proud of each doctoral cohort that advances through UCLA’s humanities division,” said Dean David Schaberg. “Our newly minted Ph.D.s leave their mark on this institution by virtue of their curiosity about the world, its cultures and its inhabitants, as well as through their earnest exploration of the myriad ways humans affect, enlighten and inspire one another. The creative research, writing and teaching our students have done while at UCLA will inform the study and practice of students to come and will make a difference in every personal and professional endeavor our graduates embark upon after leaving this campus.” 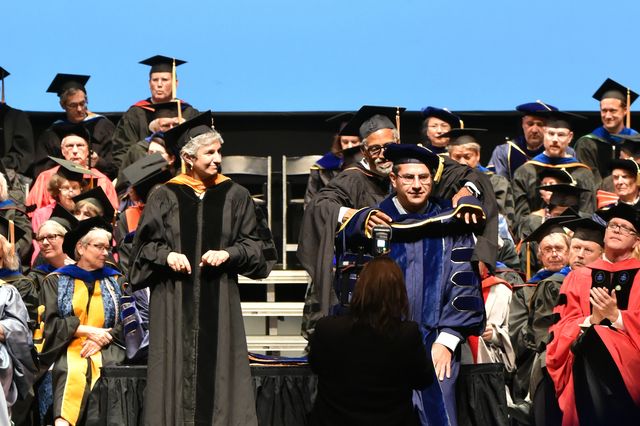 Todd Cheney/UCLA
A scholar in the Germanic languages is hooded before a crowd of celebrants that filled Royce Hall.

Among this year’s new UCLA Ph.D. recipients is Adelaide Kuehn from the department of French and Francophone studies.

“I came to UCLA to work with several exceptional scholars of francophone literature, namely professor Dominic Thomas and professor Lia Brozgal,” she said. “I also appreciated the opportunity to teach undergraduate courses and receive training in language pedagogy with professor Kimberly Jansma.”

Kuehn’s dissertation examines the ways artists, filmmakers and authors from Cameroon, the Republic of Congo and the Democratic Republic of Congo represent themselves and their art, and the influence of their work within a contemporary, global network of the arts in Africa. She has already accepted a position at the California Alliance for Arts Education, a nonprofit organization that advocates for high quality arts education for students in all California public schools.

Tiffany Naiman graduated this week with a Ph.D. in musicology at UCLA, where she did her undergraduate work and majored in American literature and culture with a minor in music history. She was also part of the Departmental Scholars Program at UCLA, coordinated by College Honors. That allowed her to complete a master’s degree in African-American studies while also finishing up her B.A. coursework. Her dissertation is titled, “Singing at Death’s Door: Late Style, Disability, and the Temporality of Illness in Popular Music.”

“What I knew would be important to my work, and what I found exciting about the musicology program at UCLA, was the fact that we were part of the humanities,” Naiman said. “We were not only allowed, but encouraged to take classes outside the department. I attended classes in performance studies, world arts and cultures, and in disability studies. Plus, I was able to earn graduate certificates in both the digital humanities and experimental critical theory programs.

“Having these opportunities has made me a more well-rounded scholar,” Naiman said.

The unconventional approach to musicology and forward-thinking mentality about music that UCLA’s musicology department is known for appealed to Naiman, who is also an accomplished programmer, film producer and DJ.

She has accepted an appointment as a postdoctoral fellow in the Thinking Matters program at Stanford University. Passionate about teaching, Naiman hopes to eventually gain a tenure-track position in musicology or media studies.

For more news and photos about Commencement 2017, go here.