Update: When the competition ended on March 8, UC Merced maintained its lead with the greatest percent of energy saved, but with the most people participating of any UC, second-place UCLA saved about three times more energy than the other UCs put together.

After nearly a month of turning off the lights, doing laundry with cold water and taking the stairs instead of the elevator, UCLA students are currently a close second in a competition among residence halls to see which UC campus can save the most energy. The competition, which began Feb. 16, ends Sunday.

“We’re super excited,” said Emma Sorrell, the sustainability manager for UCLA Housing and Hospitality. “This encourages daily practices that students can carry on even after the competition. After a few weeks, it becomes second nature to them.”

To convince fellow Bruins to participate, staff and students have developed fun ways to raise awareness and get people to sign a pledge. Students were coaxed outdoors and away from their light switches for the Glo-fest kick-off festival, where they enjoyed acoustic music and learned about ways to save energy.

Several of the residence halls — who are also in a pitched battle against each other — arranged make-your-own ice cream sundaes with a different topping on every floor to persuade students to skip the elevator, save energy and take the stairs. 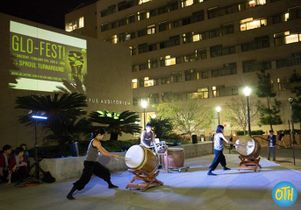 With just a couple of days to go, UCLA students’ energy use is down 5.9 percent, second only to UC Merced. Compared to their baseline use in January, the Bruins on the Hill have saved more than 47,000 kilowatts of electricity — enough to power four homes for a year, according to EPA estimates.

It’s the seventh year of the “Do It in the Dark” challenge at UCLA, but the first time that UC campuses are going head to head in the Campus Conservation Nationals 2015. It challenges students, faculty and staff to reduce energy and water use. This year, 186 campuses from around the country are competing.

“Of course, we want them to conserve energy during the competition,” said Taylor McAdam, senior education associate with the Alliance to Save Energy, a co-organizer of the contest. “But Campus Conservation Nationals is about creating an awareness of conservation behavior and promoting a culture of sustainability.”

The nine undergraduate UC campuses are competing based on energy use at the residence halls, with the exception of UC Berkeley, where instead of dorms the contest entrant is Mulford Hall — home to the environmental sciences department. UCLA, the only UC campus where every dorm is taking part, has the greatest participation with 14 buildings, said Josh O’Connor, a leadership development coordinator in Residential Life at UCLA. O’Connor is an adviser for Team Green, a student group dedicated to sustainable living, with representatives on every floor of every dorm.

“They’re very competitive and very excited about the amount of energy saved, but also encouraging each other in really positive ways,” O’Connor said. “We have progressively gone up in the UC rankings every week, and we’re going to do our absolute best in these last few days.”

Through events, posters and stickers on light switches, students are encouraged to turn off lights in empty rooms, unplug unused appliances, turn off idle computers, take shorter showers, and use fans instead of AC and sweaters instead of heaters.

“This reminds them of practices that they’re familiar with but forget,” Sorrell said. “It’s also teaching them about things — like washing with cold water or not taking the elevator — that you don’t think of as using electricity.”

“They’re very conscious about sustainability, and recycling is a no-brainer, but they’re adding to their idea about what it means to be sustainable,” O’Connor said. “The biggest ‘aha moment’ is when they realize that heating water takes energy; when we show them the research that clothes get as clean in cold water as in warm water, they change their behavior.”

Energy use in participating buildings is monitored via a dashboard and website provided by contest co-organizer Lucid Design Group, which allows participants to track how much energy their buildings are using and to see how they stack up against competitors. Students in the Renewable Energy Club at UCLA have also created the Bruin Energy App, so they can track dashboard information on smartphones.

The campuses that show the biggest percentage decline in energy use, as compared to a January baseline, will win. The grand prize for the national competition: installation of customized electricity and water use dashboards in two campus buildings.

Student enthusiasm for environmental stewardship is nothing new at UC: Student activism has long been a central force behind UC's sustainability leadership.

Students pushed for UC’s Policy on Sustainable Practices, enacted in 2004, which has helped make UC campuses among the greenest in the nation. UC President Janet Napolitano has made sustainability one of the top priorities of her administration, spurring UC even further by establishing a 2025 deadline for the system to be carbon neutral and emit zero-net greenhouse gases.