Pat Tillman found a calling he couldn’t resist when he decided to leave his successful NFL career with the Arizona Cardinals to enlist in the Army. UCLA medical student Daniel Ybarra found his calling as well while serving in the Navy as a medical corpsman in Iraq.

Now, thanks to the legacy that Tillman left behind after his tragic death in Afghanistan from friendly fire, Ybarra will be able to give back to veterans and repay the debt of gratitude he feels he owes.

“To whom much is given, much is required,” Ybarra, a married father of three, said, quoting from the Bible. “I feel I want to give back. I want to use what I’ve gained in skills to give back.” 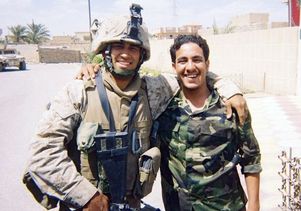 Courtesy of Daniel Ybarra
Ybarra (left) was embedded as a medical corpsman with a Marine weapons company based in Ramadi, Iraq.

Ybarra, 30, who will earn both an M.D. and a master of public health degree in 2016, is one of five student veterans at UCLA selected as Tillman scholars, recipients of scholarships ranging from $10,000 to $20,000 from the Pat Tillman Foundation, established by the late athlete’s family and friends to assist military veterans and their spouses committed to serving others in the fields of medicine, law, business, education or the arts.

This is the first year that the foundation has partnered with UCLA’s Veterans Resource Office (VRO) to identify UCLA student recipients of scholarships that will go to 60 undergraduate and graduate students nationwide this year, said Emily Ives, VRO coordinator at UCLA. “The Tillman Foundation approaches universities that are known to be veteran-friendly and have student veterans who perform as well academically as they did during their military service.” In a recent ranking of the best colleges for veterans by U.S. News and World Report, UCLA came in 18th among national universities.

Ybarra said he feels particularly honored to be selected to be part of this elite UCLA group that includes Christian Dunbar, a U.S. Navy captain who led special operations in Afghanistan with Navy SEAL teams, and Tigon Abalos, a former refugee in Vietnam, now a dental student, who volunteered to help Afghan refugees when she was in the Army.

“These people are just awesome,” Ybarra said. “Just being around them is very humbling. It’s really an honor to be part of this fantastic organization.” The foundation not only assists with funds, but brings scholars together from across the country to network and engage in professional development. “They really put you in a position to succeed,” he said.

Academic success was not something Ybarra experienced as a high school student growing up in the San Fernando Valley. “I did well in things that didn’t mean much to anyone else,” he said with a laugh. “I was good at football, breakdancing and motorcycles, but never good in the classroom. I always wanted to do well — I would start each semester telling myself, ‘This is the year I’m going to work my tail off.’ But it would never happen.”

After being forced to leave one high school and dropping out of another, he managed to graduate only after his father enrolled him in a home school program. Ybarra ended his high school years with a dismal GPA of 1.88. In community college, he survived academically, but felt he was basically “floundering without direction or purpose.” That’s when the idea of enlisting in the Navy as a corpsman began to look appealing. Both of his grandfathers had been in the service; one had been an American POW during World War II who escaped in a boxcar. “He was my hero. And here I was, a young, healthy individual just sitting at home and not really doing anything,” Ybarra said.

As he trained to take on combat medical duties, he started to excel at learning. “I was so focused on that task that it put me in a situation to succeed,” he recalled. Once deployed to Ramadi, Iraq, Ybarra was embedded with a platoon of Marines that patrolled the city and surrounding area.

“I saw a lot of people with medical needs, including kids with permanent scarring from burns. Every so often, we gave out ibuprofen for pain. They were thankful for the little we could do for them.” Ybarra felt particularly helpless when he encountered children who were disabled or ill because of war injuries.

The military doctors began to include Ybarra in their examinations of patients, asking him his opinion about patients and courses of treatment. “All along, they were teaching me. They pushed me so that when I got out of the military, I knew this was something I wanted to do.

“To be honest, the thought of becoming a doctor had never crossed my mind before. Anything that required school was just a no-go for me. But I had some awesome mentors ... and came off of active duty thinking, ‘I’m going to enroll in community college and keep pushing until something disqualifies me.’”

During his time at UCLA, Ybarra has never forgotten his military roots. He mentors undergraduate veterans at UCLA who are thinking about a medical career. And he believes his connection to veterans will bolster his ability to treat them when he eventually serves as a doctor within the Veterans Health Administration. “When you walk into a room to meet a veteran, you can relate to them in a way no one else can. That rapport is golden.”

You can read about all the 2015 UCLA Tillman scholars here. Among them are Karen Hansen (Germanic languages) and Nikolaos Sidiropoulos (business administration).

Wildfires should be considered a top threat to survival of species