As graduating seniors reveled nearby, four Tongva women lifted their voices in song, welcoming the arrival of members of the Lummi Nation. They kept time with clapper sticks, used traditionally and ceremonially by the Tongva, the Chumash and many other Indigenous peoples in California.

Hosted by UCLA’s American Indian Studies Center, on Friday, June 11, campus became the 72nd site to be visited by a 24-foot totem carved from an ancient cedar tree and bearing images of Chinook salmon, a wolf, a bear, an eagle and seven tears — a reference to seven generations of trauma passed on from colonialism. Created by artists from the House of Tears carvers of the Lummi Nation in Washington state, the totem will be delivered to Washington, D.C. next month as a gift to the Biden administration.

The mission of the #RedRoadToDC totem journey — the latest tour in a two-decade tradition of the Lummi Nation — is to inspire leaders and everyday people across the country to care for the Earth, combat climate change, protect sacred Indigenous lands and waterways, and to respect the sovereignty of Native tribes.

UCLA sits on the ancestral territory of the Tongva people. As representatives from the Gabrielino-Tongva tribe, Tina and Jessa Calderon, Kimberly Morales and Miztlayolxochtil Aguilera were the first to offer blessings to the Lummi Nation totem.

“We don’t have federal recognition,” said Aguilera, as she thanked those traveling with the totem, after offering a personal song of blessing. “We don’t have a piece of paper that says we are Indian, but we know who we are. We know that we were the last to be created, that humans were created last not to dominate the Earth and all life on it, but to be guardians and caretakers.”

Aguilera works at the Fowler Museum at UCLA as program manager of the California Native American Graves Protection and Repatriation Act, meaning she collaborates with tribes on repatriation efforts.

“They have concreted our streams and our rivers. And even though we can’t always touch our Earth mother, we are connected to her. These are our unceded lands. These are our territories and nothing can keep us from feeling her energy and protecting what needs to be protected, the sacred lands and waters,” said Tina Calderon, as she honored the group’s journey and message. “Every stop you have made has picked up more ancestors, I thank you for the messages you are taking and prayers you are picking up.”

The Lummi totem is also a symbol of the widely felt appreciation across Indian Country of President Biden naming Deb Haaland as secretary of the interior. Haaland, a UCLA alumna, made history when she became the first Native American to serve as a cabinet secretary. She is a member of the Pueblo of Laguna and a 35th generation New Mexican.

The totem’s imagery carries potent messages around the urgency of climate change, the divisiveness of politics and racism.

Chinook Salmon, which are an integral part of tribal religion, culture and physical sustenance for multiple tribes in the Pacific Northwest, are dying out. Rivers across the country are drying up, droughts and wildfires are increasing. Pipelines destroy sacred lands and pollute waterways, as long-drafted and often-broken treaties discard the sovereignty of Native nations. Indigenous people from Mexico are held at the U.S. border.

Representations of all of this and more were poured into the images found on the totem. All in attendance were invited to lay their hands on it, offering a silent prayer or blessing. 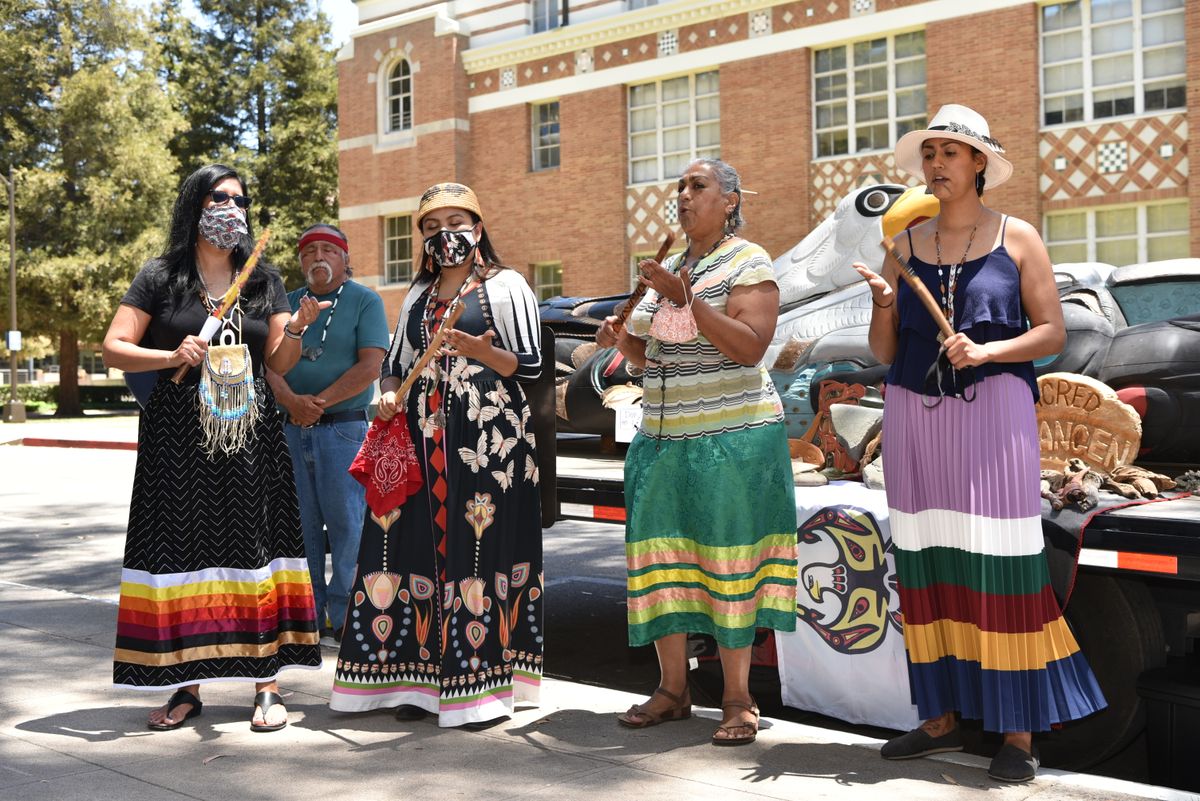 Todd Cheney/UCLA
From left: Four members of the Tongva tribe, Kimberly Morales, Miztlayolxochtil Aguilera, Tina Calderon and Jessa Calderon, sing as part of the ceremony welcoming members of the Lummi Nation and the Lummi totem to UCLA’s campus.

Jewell Praying Wolf James, head carver from the House of Tears, has a long history of advocacy and community organizing, pushing for legislation and policies that respect the Earth and Indigenous peoples.

“We are in a crisis,” James said. “We cannot sit back and let it continue. We have to find a way forward a way to be active, to be vocal, to be energetic and to be committed to the cause. And we will never give up on our sacred commitment.”

Visitors from the Lummi Nation also offered words of uplift for Native students at UCLA.

“You have strength,” said Siam’Elwit, who paints poles after carvers have done their work. “I encourage you to push yourselves hard, sit in the front row so your professors will know who you are, let them know you are not anonymous. Then the work begins after you get that piece of paper. Learn what the treaties were, learn the laws. Find your elders, find your language, speak your language.”

Siam’Elwit and her husband Doug James Jr. wrapped a blanket and their arms around student Ajana Orozco, whispering private words of support, honoring the unique challenges she faced as a two-spirit (transgender) person navigating her undergraduate experience. Orozco (Chiricahua Apache) graduated last week, with degrees in gender and LGBTQ studies. She plans to attend law school.

Kokomo Kinney (Yurok Tribe of the Yurok Reservation), co-chair of UCLA’s American Indian Studies student association, offered a song in honor of the totem, and gratitude that the group stopped on campus.

“What we are doing here is difficult,” Kinney said. “It’s difficult to be in place where we don’t see many of each other, where people don’t see our presence, but it’s times like these that remind us of what we need to do.” 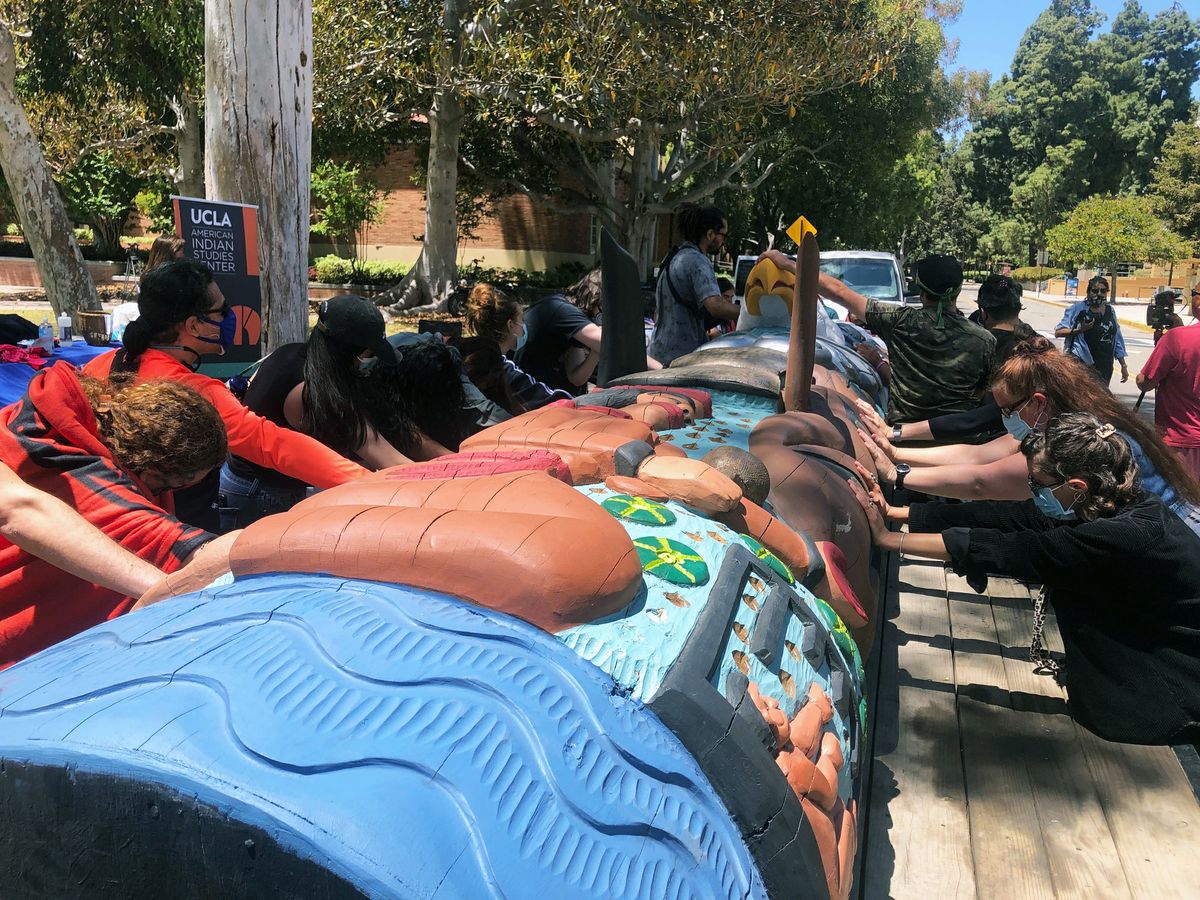 It’s an important time for UCLA as we emerge from the pandemic and re-establish campus traditions, said Mishuana Goeman (Tonawanda Band of Seneca), who serves as special advisor to the chancellor on Native American and Indigenous affairs.

Goeman is driving changes that make the presence of the Tongva more palpable to everyone who studies or works on campus, including creating a reflection space with traditional and medicinal plants near Founder’s Rock. This space will be dedicated to the memory of Tongva educators Julia Bogany and Barbara Drake, both of whom died in 2020.

“They taught me and so many others so much about what it means to live in Tovaangar,” Goeman said.”

There is a new plaque at Founders Rock that bears the words of the Tongva land acknowledgment the campus officially adopted in 2019. Goeman has a vision of UCLA spaces becoming places of commemoration, reflection and communion.

“Not just reflections about what it means to be on land lost, land taken away,” she said. “But to reflect on what we do now to care for the land we are on. A contemplation of what we can all be in relation to one another and how we can all be land caretakers.”

Head carver from the House of Tears Jewell Praying Wolf James’ artist statement about the totem.