Goldberg, director of the Seed Institute, and Parson, co-director of the Emmett Institute on Climate Change and the Environment at the UCLA School of Law, joined Los Angeles Times food columnist Russ Parsons in maintaining that GMOs shouldn’t be controversial at all.

“Can you, in fact, feed the 9 billion people we’ll have by 2050 … and how do you do that with minimal ecological impact?” mused Goldberg. “I think the way to do that is through food science.”

The biologist explained that he sees no difference between "manipulating a gene the classical way, through breeding, or by adding a gene.” Part of the technology to edit genes has been available for around 40 years, he said. You might even say that individuals are themselves GMOs if they have had medical therapy that alters their genes. In fact, blue jeans are also genetically modified because the dyes used on denim are the result of genetic modification. 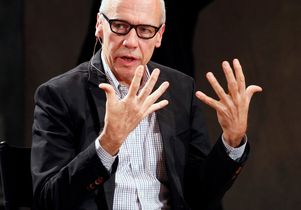 Parson, who is the Dan and Rae Emmett Professor of Environmental Law and has advised the U.S. and Canadian governments on environmental policy, said he was puzzled why people have become so passionate about this issue.

Asked whether we know for sure that GMOs are safe, Parson said, “You never know for sure, because you can’t prove a negative.” After more than a quarter century of growing GMO crops in North America, no detrimental impacts have been detected in North America compared to Europe, where people have been exposed very little to GMOs, he noted.

Goldberg also explained that the GMOs in food have undergone 10 to 15 years of testing while crops that have been grown conventionally have not been tested at all. If he engineered a hypoallergenic peanut, it could take a decade for it to get to grocery store shelves. But a grower using traditional methods to create a hyper-allergenic peanut would face no oversight. “It’s screwed up,” he said.

The discussion was moderated by Evan Kleiman, a sustainable food advocate who hosts KCRW’s “Good Food” and has taught at UCLA.

To read the entire recap of this event, go to the Zócalo website.