They’re platforms to question our assumptions about human relationships, our understanding of violence, even our definition of reality.

“Most of my work is focused on real experience versus virtual experience,” Stern said. A lifelong game player, Stern compensated for his “very poor sense of direction” in real life by playing one of his favorite computer games, “Everquest,” as a character with expert tracking abilities.

“It’s very ironic that the person with the least sort of ability as a navigator is playing a character with the most,” he said. “This made me aware of the relationship between your real personal attributes and your virtual attributes. It’s a philosophical question of what does ‘real’ mean?”

Stern, 43, was born in Israel in 1972 and grew up in a family of engineers and artists. He started writing computer programs in grade school on his family’s Apple II Plus and grew up playing all sorts of computer games. After finishing his mandatory military service in Israel, he enrolled at UC Santa Cruz in 1993.

Being in Santa Cruz at that time offered Stern proximity to the burgeoning Bay Area tech scene. He ran the server for a pre-Napster online music service called the Internet Underground Music Archive and, through his art classes, worked with some of the earliest interactivity computer programs like Director and HyperCard.

At UC Santa Cruz, he took a course by Donna Haraway that taught the importance of “political and techno-scientific literacy” and which brought together students studying science and engineering with their counterparts majoring in the humanities and social sciences. This class ultimately influenced him to stay a few extra years to design his own major, combining philosophy, math and computer science. “Those parallel paths of contemporary philosophical theory and media arts — they were newer fields of inquiry,” he said. “It was invigorating.”

Eventually Stern decided to pursue graduate studies at California Institute of the Arts in Valencia because it offered a rigorous art curriculum and cutting-edge, new-media opportunities. He later taught there as well. 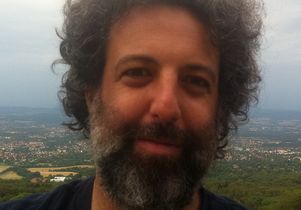 After graduate school, Stern was drawn to video game design and creation (focusing not just on software but also on the games’ controllers) because it seemed to be the best arena to explore his ideas about art, technology and how the intersection of the two influence and reflect society. Eager to experiment, he has spent most of his career working in the independent gaming world.

One trope Stern turns on its head is that there’s no physical dimension to playing video games.

“A lot of games deny the body; sitting on a couch, you sort of disappear, and I am critical of ‘immersion’ in that sense,” Stern said. “I’m interested in subverting immersion, snapping you out of it.”

In the latest incarnation of his game, “Darkgame,” Stern blows up that couch-potato stereotype and also the nearly universal video game construct of “the longer one plays a game, the stronger one’s character becomes.”

As a “Darkgame” player, you begin by looking at your game avatar — a small black sphere orbited by six clusters of organs and body parts. These red blood drops, cream-colored hands and white eyeballs, among other images, represent both the player’s and the avatar’s attributes. You’re also wearing headgear that looks a bit like an octopus, with each arm containing a small motor that applies pressure for tactile feedback to your head.

The ultimate goal is survival, and to achieve it, you’re constantly choosing how to balance which attributes you want to increase versus what abilities you’re willing to sacrifice, thus balancing the survival or your avatar with your own ability to experience the game through your senses.

The other thing that drew Stern to games is their potential to examine people’s relationships with violence. Stern served in the Israeli Air Force during the first Gulf War in the early 90s.

“It was a very disembodied war experience,” said Stern, referring to how news stations played up airstrikes and missile attacks far more than ground combat, “even in Israel where we’re used to a very on-the-ground, infantry-centric narrative of war. It certainly has a very close connection to video games — the obsession around violent acts without direct consequence.”

Multi-player, online games can provide the player with social and emotional experiences, Stern said. While the computer character looking at you on the screen doesn’t mean much on the surface level, that character is a stand-in for a real person who is remembering how you played — and whether you cheated.

“Now part of your identity is formed in a social space,” Stern said.

Since coming to UCLA in 2008, he has directed UCLA GameLab. “What I teach is experimentation and skepticism of the status quo, skepticism of the mainstream industry and what it has already produced,” said Stern, who is critical of how the industry divides the roles of engineer, artist, game designer, producer and writer.

In one of his classes, Stern, who is on the executive committee for UCLA’s Institute for Digital Research and Education Humanities, Arts, Architecture, Social and Information Collaborative, has his students create a polemical game as a capstone, with the one stipulation that it have a subjective point of view.

Students’ projects have run the gamut from games that poke fun at people’s obsession with coconuts to others that advocate for and against gun control, play off of stereotypes and make a player deal with a bad roommate. Stern wants his students to think of using games as a medium to make artistic statements about their ideas and worlds.

“A lot of the enthusiasm about games in academia is focused on their use value — the focus is often on how games are good for society because games can teach and are not just frivolous entertainment,” Stern said. “I’m not interested in championing that perspective which I see as instrumentalizing games, but rather a broader view of games as a creative medium that can be as rich as the written word or moving image.”