Norberta González and Martha Xuncax were dissolving into giggles, recalling the day a few months earlier that Xuncax was helping González with her English and grilling her in advance of her U.S. citizenship examination.

Each year, Xuncax and scores of other students volunteer through UCLA’s Project SPELL — for Students for Progress in Employee Language Learning — to teach English as a second language to UCLA employees. About 80 UCLA employees, many of whom work as custodians, housekeepers, groundskeepers or painters, are enrolled in the free, one-on-one tutoring. 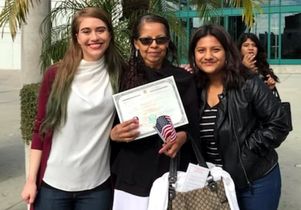 González had come to love Xuncax like family, but she was worn out from a full day of work and almost an hour of tutoring. As González tried to reason out the answer, so many of the words she had learned in the past year were blending together. She focused on the “mend” syllable of “amendment.”

“Someone who fixes pantalones!” she guessed in half-teasing exasperation. The answer got a laugh out of her tutor. In the year that the two have worked together, González, 58, has come a long way. She earned her American citizenship in March, and on June 8, she’ll graduate from Project SPELL.

Of the student volunteers, between 80 and 90 percent are first-generation college students from immigrant families, said Stephanie Youngblood, the program’s director.

“So many of them tell me their parents were housekeepers or custodians who spoke more Spanish than English,” said Youngblood, a former ESL teacher who grew up in a bilingual household. “Volunteering lets them help people who remind them of their parents.

“This is also a community for them. Other students in their majors might have parents who are doctors, and here, they don’t feel nervous sharing that their father is a mechanic and their mom picks food in a field, because that’s something we’re proud of, and we celebrate those contributions.”

Project SPELL is operated through the UCLA Alumni Association, which also provides the tutors with career counseling, networking opportunities and job interview skills.

Xuncax said the experience of being a tutor has been inspiring.

“Norberta was always exhausted when she came to tutoring, but she always came with a smile, and she always found time to study,” Xuncax said. “She made me want to be more optimistic and work harder. She’s also an activist, so when I’m feeling like I’m too busy or too tired to protest, I think of Norberta finding the time and try to be more like her. She was always trying to inspire me, like, ‘Whatever you do, do it well.’ She was like a mother figure to me.”

Beyond simply helping the participants with their English, Project SPELL aims to provide practical skills in line with the learners’ life goals — whether that means earning citizenship or a promotion, or learning  about computers or etiquette. For example, Youngblood said, one staff member wasn’t sure how to politely ask students to leave a room he needed to clean.

“He would say, ‘Excuse me, I’m so sorry to bother you. If it’s OK with you, please go away,’” Youngblood said, smiling at the memory. “He was already so close.”

Peter Angelis, assistant vice chancellor for UCLA Housing and Hospitality Services, where many of the learners work, said offering Project SPELL as an option for employees’ paid training time helps both them and the department.

“To provide great hospitality, you have to be a caring individual,” Angelis said. “Project SPELL is a wonderful example of how we show our team members that we care about their personal and professional success and reinforce the message that we are always striving to sustain a culture of caring. Norberta’s great achievement resulted from a lot of hard work, and our organization only gets stronger with these sorts of success stories.”

González was far from the program’s only success story this year. Another participant became a U.S. citizen, too; others earned promotions and enrolled in community college.

González became a permanent resident in 2003 and began working at UCLA in 2007, but she doubts she could have passed the citizenship exam without Xuncax’s tutoring.

Xuncax’s cheerful attitude buoyed González along, and Xuncax and Youngblood were with her the day she got her citizenship, and right after, they took her out to breakfast to celebrate. “They are like my family,” González said.

Xuncax is a first-generation college student from South Los Angeles, and González reminds her of her parents — her mother is from Mexico and her father, a mechanic, is from Guatemala.

“Speaking English is something my mom struggles with,” Xuncax said. “She went to school, but her life has been hard, so she had to stop taking English classes. I’ve always wished I could help teach her, so I’m grateful that I had an opportunity to help Norberta.”