Army veteran Henry Shin is no slouch – he served in the military for five years and has been accepted into UCLA Anderson’s executive M.B.A. program. But even he had trouble figuring out how to use his military benefits to pay for school until he attended a UCLA session for new-student veterans designed to demystify the process.

“I’ve been doing Internet searches, but there’s only so much you can learn online,” Shin said Wednesday during a break from the session. “Hearing answers that are UCLA-specific really clarifies things, and it’s so good to get the names and numbers of people we can contact with questions. I feel better than I did coming in.” 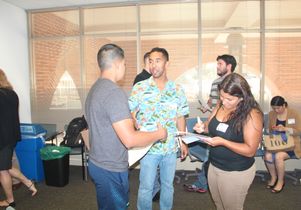 More than 40 incoming undergraduate and graduate vets — including active-duty military, National Guard and reservists — attended UCLA’s first Veterans On-Boarding session. The extra orientation is tailored specifically to vets as an add-on to the traditional tours and new-student orientations offered this summer.

The group took a specialized tour of more than a dozen campus offices, from the registrar and financial aid offices to the Office for Students with Disabilities. And at each location, designated staff were there to help. The vets learned how to apply for military education benefits, how those benefits might change their financial aid packages and who on campus to turn to for support or answers.

While more universities are reaching out to vets, it’s a relatively recent trend to offer them a special orientation, making UCLA’s program more full-service than most. Dubbed the “on-boarding,” a familiar term for many of the vets, the program expands on the UCLA Veterans Initiative and the university’s ongoing efforts to ease new-student vets’ transition into college.

The campus’s Veterans Resource Office (VRO), which caters to UCLA’s 100 undergrad and 150 graduate vets with monthly workshops and community-building events, among other resources, saw an opportunity before fall quarter to relieve some of the stress vets face, said Emily Ives, VRO coordinator. Ives and Katherine Jakle, a counselor with UCLA’s Counseling and Psychological Services, largely organized the sessions.

“Student veterans have their own paperwork to fill out, military benefits to apply for and lots of other specialized things they need settled before the first day of school,” Ives explained. “We’re collecting all the details they need, giving them a chance to meet their peers and making sure they know that the university supports them.”

The orientation session covered common pitfalls, for example, reminding students that while UCLA doesn’t ding student veterans for late tuition payments if they simply applied a little late for their benefits, landlords won’t be as understanding while students wait for the Veterans Benefits Administration to approve housing stipends.

Some students were surprised to find out at the on-boarding that they can’t “double-dip” by accepting V.A. benefits and some forms of financial aid. So they were advised to be cautious about spending financial aid funds until they are sure they can keep them.

“It can be very isolating to come in as a student veteran,” Jakle said. “They’re often older and have very different life experiences than traditional students, and it’s important for them to connect with each other, in addition to getting important information about services specifically for them.”

That’s why on top of the vet-specific information sessions, the vets also socialized over lunch to begin building camaraderie and heard from a panel of vets who are current UCLA students or recent graduates. To start the day, the unusually broad-shouldered bunch milled around playing a game of ice-breaker bingo that had them searching for fellow vets who were born in the same month, who enjoyed hiking or parachuted during their service.

“Today was a lot more informative than I expected,” said Will Williamson, 25, a new undergraduate who spent four years as a Marine. “I like that we were able to talk to current UCLA vets, and I really liked the bingo. It gave me a chance to meet some really cool people.

The tour was the most useful part of the day for Michelle Casale, a 30-year-old undergrad who spent six years in the Navy.

“I got a packet of information, but now I really know where the offices are and who to talk to,” Casale said. “It feels really friendly here. I liked meeting the staff, and the resources they pointed out on the tour made it super helpful.”

Seasoned student vets highlighted resources they found helpful, like UCLA’s Boots to Bruins class. The class discusses research and theories about how to transition back to civilian life and gives students a chance to discuss their own transition with fellow veterans.

“Until that class, I wasn’t really involved in the vets’ community on campus,” said Thomas La Marr, a former Marine who graduated from UCLA in December. “It was great to build that sense of community and start hanging out.”

“That network of fellow vets is key,” agreed Ramon Contreras, another former Marine who graduated in June. “That’s how you get the answers. You ask another vet.”

Matt Follett, a fourth-year political science major who spent more than 16 years in the Marines, reserves and counter-intelligence, also stressed that knowing fellow vets is vital. “It’s good to have people to talk to, because, depending on the class, students and professors will talk about Iraq and Afghanistan, and they don’t say things with malice, but it can get on your nerves.”

Each vet left with a checklist of things to do, a list of UCLA student veteran organizations and a calendar of upcoming workshops for vets.

“We want them all to know that we support and appreciate them,” Ives said. “We hope the on-boarding helps them feel connected to the university and to each other.”