Like many graduating seniors, India Carney is anxious about her future. The 21-year-old voice performance major has long imagined singing on Broadway or launching a career as a solo artist. As her final quarter at UCLA begins, millions of people are eager to see if her dreams will come true.

After making it through Monday night’s final high-pressure Knockout Round (see video below), Carney became one of 20 finalists vying to win the eighth season of NBC’s “The Voice.” The top honor comes with a $100,000 prize, a recording contract and national exposure. Live performances on the show begin Monday, April 6. Contestants will advance weekly based on votes from the public. Viewers can call or text the number that appears on screen during the performances until 9 a.m. PST the next day, or vote using the “The Voice” app.

Whatever the outcome, Carney has already found success on iTunes after her Battle Round duet with fellow competitor Clinton Washington resonated so strongly that their rendition of “Stay” quickly climbed to No. 27 on the pop chart and No. 66 on the all-genre chart based on the number of digital downloads. 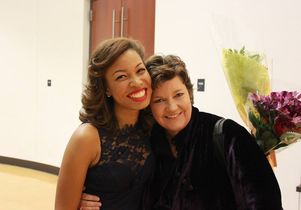 UCLA
Carney was persuaded to come to UCLA by voice and opera studies professor Juliana Gondek, who became her coach.

Carney credits UCLA for the opportunities and intensive training that have helped her blossom as a performer that many “Voice” viewers have already labeled this season’s breakout star. Carney mentioned the campus’s role in a segment that introduced her on the show.

“I’m studying a lot of opera and learning how to use my voice, condition it and just understand how it works,” said Carney in an interview that followed her Battle Round. “I know how to use it in different ways, and I have my training to thank for that.”

Besides her family and close friends, no group will be more delighted to witness her continuing success on “The Voice” than her fellow UCLA Bruins. Some of Carney’s friends and fans in the music department hold “The Voice” watching parties, said Juliana Gondek, professor of voice and opera studies. She has been training Carney since she arrived as a freshman on a regimen of opera and classical vocal technique and repertoire. Gondek has helped the talented student condition her voice, develop her musical interpretation and work on vocal range and delivery.

“As long as she maintains her confidence and doesn’t get sidetracked by minutiae and things that don’t matter, like how the other contestants are doing, she will go far,” predicted Gondek, who formerly served as chair of vocal studies at UCLA.

Gondek has a special affinity for the young singer. After seeing Carney perform in 2011, the professor convinced Carney to leave the Big Apple for the City of Angels.

Gondek was watching a live stream of the National YoungArts Foundation’s final competition, which showcases the country’s best rising performing and visual artists, when Carney, then a 17-year-old high school senior at LaGuardia High School in New York City, hit the stage and took her audience on an unforgettable auditory adventure.

“I was instantly blown away as soon as I heard her sing,” said Gondek. “Aside from the general timbre of her voice, the color and quality of her instrument are very unique. She did not sound like everybody else. The other thing that attracted me to her instantly was that she knew how to communicate a text, and that is something that is hard to teach.”

Determined to bring Carney to UCLA, Gondek worked with the School of the Arts and Architecture’s development team to secure scholarship funding that would ease financial barriers for the out-of-state student.

Carney — already a U.S. Presidential Scholar in the Arts, a designation awarded to just 20 graduating high school seniors each year — was encouraged by the enthusiasm of her vocal instructors and mentors to UCLA’s offer. She enrolled in the UCLA Voice and Opera program that fall and has been turning heads ever since, including those belonging to Christina Aguilera, Adam Levine, Blake Shelton and Pharrell Williams, the four judges/coaches on “The Voice.”

Esteemed vocalists in their own right, each judge turned his or her chair around during her Blind Audition performance of Billy Joel’s “New York State of Mind” to signal their desire to work with her. That was followed by a standing ovation and appeals for her to join their respective teams.

“She’s a great coach. She always has great things to say, so I’m very lucky to be learning from her,” Carney said.

Gondek has just as much admiration for her student, noting that Carney has shown resilience in the face of a setback. The UCLA student actually had auditioned for “The Voice” in 2012. After failing to be selected for the show, Carney dusted herself off and got right back to work, polishing her vocal skills day by day.

“That is just who India is,” said her UCLA coach. “She’s dedicated, she’s determined and she doesn’t let anything get in her way.” 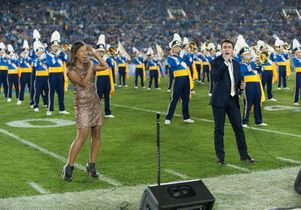 India Carney, a contestant on NBC’s “The Voice,” has performed at several major campus events, including a nationally televised football game at the Rose Bowl in 2012.

Her singing prowess has not gone unnoticed on campus. Carney has been a member and music director of UCLA’s a cappella group The Scattertones and has performed original compositions at Spring Sing and the UCLA JazzReggae Fest with the India Carney Band. She has also belted out “The Star Spangled Banner” at UCLA athletic events, including a nationally televised football game at the Rose Bowl. She’s also been a featured performer at a variety of campus events, including UCLA Bruin Day, the launch of the UCLA Centennial Campaign, Thank UCLA Day and a welcome event for incoming freshmen and transfer students.

“This is a young woman who has learned not to wait for opportunities to come to her,” said Gondek. “She actively goes after them, and the proof of her success is where she is now.”